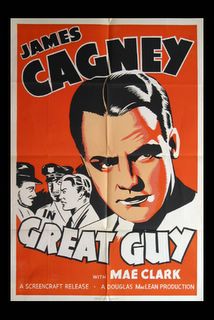 This week, the Siren also watched James Cagney in Great Guy, a low-budget crime drama produced by Grand National in 1936, when Cagney was on suspension from Warner Brothers. He plays an inspector for the Bureau of Weights and Measures. See how innovative movies used to be? You don't catch screenwriters nowadays tapping the dramatic value inherent in, say, the Federal Reserve Board of Governors. Our man unmasks a crime syndicate that seeks to cheat families by shorting them on things like bags of strawberries. Cagney gets a scene where he compares the amount lost to scams with the national debt. Sounds silly until you consider the Depression, or even Barbara Ehrenreich's Nickle and Dimed. The highlight in Great Guy comes early, when Cagney busts up a grocer's after he discovers lead weights in the chicken. This movie is no classic, but you could do worse than watching Cagney toss a plucked chicken around the store. Mae Clarke, of everlasting grapefruit fame, plays the love interest. What you really notice in an admitted antique like Great Guy is the dialogue. Here's a B picture from a Poverty Row studio, and you still get great lines like this one, from Cagney: ""My best friend gets hit by a streetcar, there's Civil War in Spain, we have an earthquake in Japan--and now you wear that hat!"

I really like James Cagney, and I am willing to watch just about anything. A film with great lines is all I need. I still cannot forget "sex has everything to do with it" from The Palm Beach Story.

The Bureau of Weights and Measures? That's fantastic. My sister and I were writing a story for a while about a renegade restaurant inspector from the Department of Health. Maybe it ought to have been a screenplay...or then again, maybe not.

Oh I do like JC in small doses but am not a major fan.
I remember enjoying his performance as a rather scary gangster in 'White Heat'

parislondres: In small doses? Cagney is a small dose--of dynamite. To each his own. I usually divide the crowd when I rave about Lee Tracy, who is good in The Half Naked Truth and Blessed Event, the second of which he picked up after Cagney turned it down. I don't want to call him the poor man's Cagney, but he does have the high speed delivery, if not the toughness, warmth or range of Cagney.

C~
You mentioned finding a good rental place in Toronto.
Here are a few of my favorites:
Queen Video--2 locations:
(1) on Queen close to Spadina and (2) on Bloor close to Bathurst. They have terrific collections.

Also, Suspect Video on Markham close to Bloor (and actually not far from the above Queen Video location).

btw, do you have Netflix in Canada?

Great Guy is now on my Netflix queue. My "early" Cagney favorites are Boy Meets Girl and Taxi.

One more comment, if I may, on Red Dawn. I think John Milius always intended the film to be a joke. The giveaway is seeing an Eisenstein film at the local theater's marquee. My own nominee for worst movie of all time is the totally unwatchable Mars Needs Women by Larry Buchanan.

Cagney is one of my favorites! He was one of the few who could be powerful and vulnerable.

Thanks for the video pointers, Girish! those aren't very close to me but could still work for a weekend rental.

Peter: I hope you are right about Milius, but I have my doubts.

Anonymous: why be anonymous? There is no disgrace in suggesting Joan Rivers.

As I was dressing for my workday in my office at the foot of the steps, I turned on the Dish and there was Captain Cagney watering his palm tree and looking over the deck at his suffering men. The PA system announced Sick Call; the scene shifted to Doctor William Powell, treating all of his patients with that same wry voice he used to question suspects when he and Nora were solving cases.

The captain was thicker in the chest and trunk than the man who danced up the walls ten years earlier, but he was still Cagney. Memory says his body had begun to 'middle age' when he played Cody Jarrett, not that it mattered.

One of the last films I recall watching with my late wife was "The Strawberry Blonde." Morgan was a film snob; she loved Kane but avoided "Hollywood" and did not see Casablanca until past age 45, but on seeing Cagney and de Havilland, and hearing the music, she remarked that only Cagney could make such corn grow, no other actor would have been believable.

I always think of Olivia and Errol, but she made Cagney a wonderful wife in Blonde, and there too was Jack Carson. Has anyone ever written about the uses studios found for him? He could be the wise cracking friend and neighbor to all, like the cop in Arsenic. As friend, he was always giving advice to the leading man, like Tony Randall would in 50-60s romantic fluff. Then there are his weak husband roles, married to Mildred Pierce or Mae Pollitt in "Cat" where he is not only emasculated, but the wimpy brother of Brick. The amazing thing is that sixteen years had passed since Strawberry Blonde, but his looks seemed the same.

Ooops, back to the man of the hour. Every so often Cinemax runs "Blood on the Sun." This is one of the few films done in the West about pre-war Japan. Cagney is a reporter this time, seeing the Southeast Asia Co-Prosperity Sphere for what it was, another Fascist regime come to power. The film largely avoids the nasty racism of so many made at that time, and indicts the criminals that took the country to war.

exiled: I love The Strawberry Blonde, the sweetest of sweetcorn. A few years ago I caught the original One Sunday Afternoon with Gary Cooper. Cooper comes off far less symathetically than Cagney. I think the wistful, nostalgic tone that Walsh brought to the story had more than a little to do with it.

Jack Carson was all that you say. He had amazing versatility, a broad range from comedy to drama. He was always enjoyable, even in the fluff comedies in which he co-starred in the 40s. I fondly recall his later support in A Star is Born and The Tarnished Angels and so many others.

Remember that a lot of the movies from the Depression tend to glorify all of the recently instituted government agencies and departments. This wasn't just a creativity thing, but was also a major political statement (Republicans of the time literally loathed all the new agencies). The studios had been opposed to the New Deal initially, but by the mid-1930s were more enthusiastic since the New Deal revived discretionary consumer spending somewhat (a lot of which flowed to movies).

Tania, that's not a terrible idea at all.

I am loving this comments thread. I am so happy to be reminded of Jack Carson, another actor who never bored me once. And I love The Strawberry Blonde as well. In the 1940s there was this whole slew of movies set just before and around the turn of the century, which time-wise would be like us have an onslaught of 1950s movies, I suppose. But the world of 1890 was so radically different from 1940 ... if you time-traveled a person from 1950 to now they would recognize almost everything we have, but not so if you brought an 1890s person fifty years forward. Perhaps this is the germ of a post, maybe I am just rambling. :)

Alex, great point about the new agencies. I think that even now having a modern-day government agent, and his agency, portrayed as an unmixed force for good would be pretty radical.

I wonder, Siren, if Technicolor had something to do with the look back to the turn of the century. Contemporary late depression fashion, if it can be called that, was drab, befitting the times, but films set in the past let the makers show Gene Tierney, e.g., in those full dresses and hats of the day, with opulent wall paper, shiny wooden furniture and rich drapes in the background. I am thinking, of course, of Lubitsch's 'Heaven Can Wait,' which has the most sumptious use of color outside Sherwood Forest and is set in the late 19th-early 20th Century.

Of course, my theory falls apart when I consider that Welles used B&W to bring off the Joseph Cotten fashion show in 'Ambersons.'

Exiled: I think you are on to something. Surely all those wartime restrictions had people hungering for a little opulence, too. I am thinking of Rita Hayworth in Cover Girl, and Meet Me in St. Louis, In the Good Old Summertime ... I also love Heaven Can Wait.

I think B&W gave Ambersons a melancholy quality, but the B&W was velvety, sumptuous, like in the big party scene.

Speaking of B&W and melancholy, I'll take Max Ophuls in B&W over in color any day.

But then, I just love B&W, and miss it dearly. Roger Ebert once said that the tease by Rita Hayworth in Gilda was better in B&W because it focused on what was essential: her form. Focused, in other words, on with what was in the dress, and not the surface of the dress itself.

Jack Naka said...
This comment has been removed by a blog administrator.
2:27 PM

I have no idea if you even still read comments on old posts suc has this, but...

I came to this post through an almost uncreatable chain of links, filled with joy at coverage of a film I've seen. Yes: "Bureau of Weights and Measures": I had the same reaction. How DID it occur to someone to cast the hero in such a role, and then to put Cagney in it? It's a mystery!

But I'm writing because of that brilliant quote you end this piece with. God, it's a beaut! But, reading it reminded me of a favorite line from Gentlemen Prefer Blondes, when Lady Piggy storms out of the manager's office in the Parisian hotel, huffing, "You'll find I mean business!" To which Jane Russell repies, "Then why are you wearing that hat?"

For some reason, this makes my friend Chris and me weep with laughter.