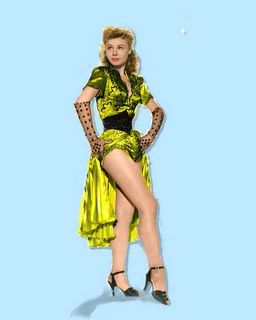 A publicity shot for Happy Go Lovely shows off Vera-Ellen's most famous assets. She is yet another in a long list of Obscure Stars the Siren Loves. Despite snappy comic timing and considerable dancing talent, Vera-Ellen's popularity never really took off. She seems to have been a likable person, but her personal life was unhappy, including as it did two divorces, an infant daughter who succumbed to SIDS and (reputedly) a long battle with anorexia. According to Hollywood columnist Lee Graham, when the dancer weighed herself in the morning, which she always did in the nude, she would take out her contact lenses. When the musical era died Vera-Ellen's career died with it, even faster than that of Cyd Charisse. If you want to see Vera-Ellen at her best, check out her justly famous "Slaughter on Tenth Avenue" number, with Gene Kelly, from Words and Music.

Underappreciated, perhaps. But I refuse to accept the term "obscure" for the lovely Vera-Ellen. She danced at MGM! The only thing obscure here are the reasons for her underappreciation.

Far from obscure to the connoisseur, certainly. But just try zipping the name Vera-Ellen past the man or woman on the street - even during the holidays when "White Christmas" is in heavy rotation.

Yeah, yeah, but the man or woman on the street (cross-dresser?) is also lining up for Michael Bay movies.

Totally off the subject: Weren't you discussing Naruse recently? There's an online article in the new Flm Comment. Cut and paste:

Thanks, Flickhead! There is a Naruse retrospective coming up at the Cinematheque this fall. Yippee!

I have never heard of Vera-Ellen, but your mention is enough to do some research. The publicity shot is lovely!

My fave is her as Miss Turnstiles in On the Town. I especially love the part with her and her plump flask-drinking instructor. Okay, so I just love the whole movie... but that was one of the funnier bits to me.