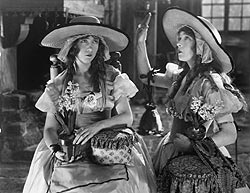 The Siren wishes everyone could see D.W. Griffith's take on the French Revolution as she did, with a Parisian-bred movie fan at your elbow. She usually has one handy, having had the foresight to marry the gentleman. Consequently, she could look over and see his befuddlement at the intertitle calling Danton "the Abraham Lincoln of France." Even better was the expression on view when the Parisian mob were described as "Bolsheviks." Ah well, as they used to say in the Cold War days, all revolutions after 1776 were Marxist-Leninist anyway.

Griffith's politics in Orphans of the Storm are all over the place, but the film is certainly better in that regard than The Birth of a Nation. (Then again, barbed-wire bra straps are less painful than the politics of that 1915 opus.) Griffith was a superbly innovative 20th century director. But the artist Griffith also had his head and heart in the 19th century, for better, as in Broken Blossoms (the Siren's favorite Griffith), or for worse, as in Birth. Lillian Gish said this film was heavily influenced by Thomas Carlyle, as well as Charles Dickens, Griffith's favorite novelist. Some sequences are so melodramatic, you could believe you were watching the Crummles theatrical troupe from Nicholas Nickleby.

Orphans is gorgeous, though. Nobody did epic, teeming crowd scenes quite like Griffith, and there are precious few directors who ever conveyed the sweep of history with the same flair. Given Griffith's overwritten intertitles, the Gish sisters do remarkably well as the orphans of the title. Lillian, of course, was a peerless artist who could pull at your heart like no other. Dorothy, as a blind girl forced to beg in the streets, probably has the better role for once. The other performances vary wildly in quality, from Joseph Schildkraut as a rather effeminate hero (Dorothy remarked tartly that he was prettier than she was) to Monte Blue acquitting himself quite well as Danton.

While she is on the subject of silent movies, the Siren wants to point out two great Websites. Lately she has been losing herself in The Silent Movie Bookshelf, a set of eye-popping primary source material from the period, such as articles from 1927 and 1928 about how The Wedding March and The Crowd were revised after audience previews, and another series written by Charlie Chaplin about his triumphal return to England. She is also enjoying Gilda's Blue Book of the Screen, a fan site that lovingly compiles articles, pictures, links and a wonderful set of organ-music files.

Mine too.
And what a great set of intertitles he whipped up for the film. e.g.

Narrator: Above all, Battling hates those not born in the same great country as himself.

Broken Blossoms is so lovely and timeless. Griffith channels Dickens in the best possible way in intertitles like that one. (I love Dickens anyway.) There are some fleeting moments in Orphans that have the same quality, but not enough overall.

Thanks for those links! Those are really great finds.

(And do try to see The Last Command. The ending is overly pat and hasty, but it's still really worth a viewing.)

Ah, if only I could come over and watch some movies with you. This film sounds wonderful. I have not seen it, but now I know I should.

K., I certainly will. I am making a concerted effort to see more silents.

Sometime during the 1930s, Carole Lombard did a still session (she probably did more stills than anyone in the business) where, through trick photography, she portrays both Gish sisters in "Orphans of the Storm." It's charming and semi-comedic, and I wish I knew where I could find it.