The Siren has been working her way through her must-see DVD stack. Many thrillers to cross. Ah, film noir, nothing like it. Women wore fitted suits for everything from luncheon with the girls to a train-boarding getaway from the local mob; men wore trenchcoats but didn't tie and knot the belts like sissies; and everybody drank whacking big cocktails and smoked as though replacement lungs were 25 cents at the Automat. The Narrow Margin (1952), which I saw last week, is a splendid example. 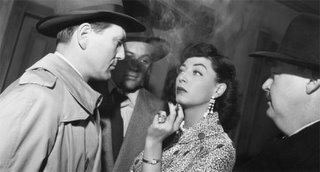 You won't find the Siren saying much of anything good about the Hays Code, but the ban on profanity meant the genre carries some of the best, most creative slang and insults in the annals of American art. My favorite in The Narrow Margin: "[She's a] 60-cent special. Cheap, flashy and strictly poison under the gravy." Other choice morsels include "You make me sick" and the response "well, use your own sink!" as well as "you cheap badge-pusher!" (Sounds great, but what does it mean? How does a cop push a badge? Into a crook's face? But that is usually more of a flash. Possibly the Hays Office heard "badge flasher" and said "you've got to be kidding.")

The setting is a train, so the Siren was inclined to like the movie anyway, since she has a weakness for train pictures of any kind. It was a B picture, but it is class all the way. Marie Windsor, the aforementioned 60-cent special, stars as the wife of a dead mobster, and flinty, growling, shovel-faced Charles McGraw plays the cop who's escorting her to testify in a big racketeering trial. Windsor is just amazing, so tough you could use her to upholster a couch, sashaying around in her floozywear and snarling over everything from the gangsters who want her dead to the cop's failure to bring her breakfast in a timely manner. (Interesting interview with her here.) 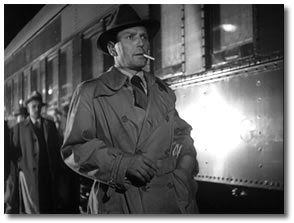 McGraw does particularly well showing his character's disgust at his charge. You can see him throwing himself into the pure gamemanship of protection, as he fights to avoid thinking about her utter worthlessness. The supporting cast is equally good, including Paul Maxey as a rotund and enigmatic passenger and Gordon Gebert as a small child with the kind of vocal power you associate with episodes of "Nanny 911."

More than most pictures of the era, the movie captures the grubbiness and claustrophobia of a passenger train. People drift up and down the corridors, nosing around in things that are none of their business and harrassing the overworked porters and conductor. The train speeds up, slows down, picks the worst moments to lurch around and knock everyone off balance. The set was stationary in order to save money, but director Richard Fleischer and cinematographer George E. Diskant made a virtue of that by using camera to suggest the train's movement. They used a lot of hand-held work that gives an added feeling of reality. Scenes are lit in a natural-looking way, including a nice sequence at a rather seedy station, shot entirely in bright daylight. There's no soundtrack either, just the whistles and rattles of the train.

There is a twist at the end, but before the Siren gave it away she'd go into Witness Protection herself. The one flaw, however, is that after you've seen the movie you realize there are several things that just don't make any sense. Doesn't matter when you're watching it, however. The Narrow Margin is so entertaining you don't care. And there are compensations, in that you also realize the theme was spelled out quite early, and developed with admirable consistency throughout.

Plus, the film moves too swiftly for much analysis while you're watching. The Narrow Margin doesn't dawdle.

(Top, Marie Windsor shows off her taste in costume jewelry to cops Charles McGraw (left) and Don Beddoe (right). Below, McGraw demonstrates how to wear a trenchcoat.)
Posted by The Siren at 10:12 PM

Marie Windsor. Now you're talking. I will always remember her as Sherry Peatty.

The creative language written for pre-'60s American film (especially noir) is a lot easier on the ear and more stimulating than anything that came with the MPAA ratings of the late '60s.

In one of his most memorable columns in the Village Voice, Andrew Sarris related the story of when he showed his students "The Asphalt Jungle", in which Sterling Hayden's character, named Dix, threatened people with the line, "Don't bone me!"

Every time "Dix" warned people not to "bone" him, Sarris's students would crack up. And Sarris, naive and inexperienced in the ways of the street, had no idea what was so funny until his students explained it to him afterward.

From that point on, I often wondered how much nuance in other films had sailed over his wide, wise but innocent head.

Regarding dialogue, I love the Chandler quote buried in this excerpt from an article I wrote on James Cain:

?Cain?s dialogue in his fiction is written to the eye.? He went on with his thought, ?Now that we?ve gotten that out of the way, let?s dialogue it in the same spirit as he has in the book, and not the identically same words.? To his publisher, Chandler was more explicit, ?Everything he touches smells like a billygoat. He is every kind of writer I detest, a Proust in greasy overalls, a dirty little boy with a piece of chalk and a board fence and nobody looking. Such people are the offal of literature, not because they write about dirty things, but because they do it in a dirty way.?

These words so aptly describe both writers!

Your comment on the trains of that day is so right on. I rode them as a boy and remember. So many black and white films made in the late forties, early fifties, when directors went out into the streets, give us such a wonderful view into the past, remembrances that period pieces made later cannot convey. One pet peeve of mine in modern period pieces is how shiny the cars look, since the autos have been borrowed from people who would object to their finish being dulled.

Well, you've made me want to find this film which I have never seen.

Flickhead: Completely hilarious. There was always something rather sweet about Sarris; he never really inserted the stiletto with the kind of glee that, say, Pauline Kael often did.

Exiled: Great Chandler quote. Thing is, I like both him AND Cain. I think Cain would have said (or maybe did say) that Chandler was a little fussy and ornate sometimes. I do think you would really, really like "The Narrow Margin." Let me know if you see it!

I have not seen th film and you have wetted my appetite: I sometimes watch movies of B budget relegated to late-night TV showings and, frankly, they are lots better than the blockbusters broadcasted a few hours before.
While I'm against censorship, I agree that really good writers found it a challenge to hone their wits: nowadays lesser authors will try to enliven up a dialogue by the sole means of Anglo-saxon, which tends to get boring.

And yes, the shorter films of yore ended with you wishing a longer film (while in many a long film the thought is "is it not ending yet?"). We have a saying here which roughly translated means "if you make it brief, you make it twice as good"

Gloria, I'm glad you followed the link. I loved the interview, it is a little master class in how to be studiously polite and still make all your points crystal-clear. Obviously Windsor's noir roles were acting of a very high order, since it's hard to imagine a role further from her real-life demeanor than the one she plays in Narrow Margin!

Narrow Margin is one of the best of 50s noir. Tough and snappy, and it looks great. McGraw is one of my favorite B tough guys. It's always odd to see him playing in costume in a period film or adopting an accent. With that gravel voice he belongs in the sidestreets of noir.

I worship at the altar of Charles McGraw. Can't remember who it was--I think it was Eddie Mueller--who remarked that Chuck's voice sounded "as if he was being strangled/"

Was any actor of that era tougher than McGraw was in The Threat? The only one that comes to mind is Lawrence Tierney, who was almost one dimensionally hard boiled. Tierney was tough reading the newspaper.

I like this movie. "Nobody likes a man of my tonnage"--that (or something close to it) is my own favorite line in the film.

Ivan - what a perfect description. I love actors with distinctive voices, have been meaning to post on that subject.

Surly - tonight I am planning to watch "Born to Kill" unless I get sucked into figure skating, so I can do a Tierney/McGraw comparison with almost back-to-back viewings.

Zach - the line I remember is "Nobody loves a fat man except his grocer and his tailor." He was a great character. It's just such a good script. It was nominated for an Oscar and that can't have happened to very many Bs!

Born to Kill is a nasty treat. The opening is a stunner. The only thing I can't figure is why Elisia Cook Jr. is Tierney's friend--does Larry get him girls? Hell, I can't imagine anyone being Tierney's friend.

That Robert Wise could make both Born To Kill and The Sound Of Music is a testament to his "professionalism, ie: his lack of a point of view.

Campaspe, I think you're more accurate than I am--you've jogged my memory a little. But he does use the word "tonnage" somewhere, doesn't he?

Zach, I checked IMDB, and according to their quotes section the complete line was: "Sorry, this train wasn't designed for my tonnage, heh. Nobody loves a fat man except his grocer and his tailor!" So we were each remembering a different half of the line. :)

Yes, Payne is great in that great film. And this might be heresy, but former babyfaced juvenile Dick Powell is very tough in an exhausted, end-of-his-rope kind of way in "Cornered". And he beats hard enough to kill in that one.

Isn't "The Narrow Margin" a wonderful film? I saw it for the first time at the Film Noir festival in San Francisco in January, and producer Stanley Rubin and star Jacqueline White (who still looks fabulous) were the special guests. The Q&A was very interesting, but little was said about Marie Windsor - perhaps out of deference to Jackie. Amazing that Howard Hughes shelved this pic for so long and wanted to make some horrible changes that would have ruined the picture.