Greetings, patient readers! The Siren and brood have finally landed in Brooklyn and gotten re-hooked to the virtual world. Jet-lag finally shaken, the Siren is gearing up for June 29's Lana Turner tribute.

By way of prelude, I am re-posting a piece I wrote after Sandra Dee died, since few people probably saw it at the time. Sandra Dee leads into Lana because, of course, they co-starred in two movies, one messy but enjoyable (Portrait in Black) and one classic, Imitation of Life.

Re-reading this obit makes the Siren realize that sadness and indignation over the sorry trajectory of Dee's life meant she neglected the films a bit. Not much there to explain exactly why I have always been so fond of her. And I am not sure I can explain it, entirely. Some stars you just connect with on a level that has little to do with talent, though I do believe Dee had that.

"So sweet she caused cavities," sniped the writers of an otherwise highly sympathetic essay in The Bad and the Beautiful, an assessment the Siren finds consistent with most critics, but bizarrely unfair. The actress was not sweet, but rather serene. Most of Dee's movies had her as the calm, centered, preternaturally mature youngster surrounded by adults either ditzy (The Reluctant Debutante, Come September), preoccupied (Romanoff and Juliet, Gidget) or downright malevolent (Portrait in Black, A Summer Place).

She did arouse a protective instinct, with her doll-like face seeming to indicate that she needed to be sheltered from life in general and ravening, louche men in particular. As the movies unfolded you generally learned that Dee could take care of herself. Adults flailed around, plotting murder, getting divorced, trying to marry her off or lock her up. Sandra always turned out all right in the end. To a teenager, which I was when I discovered Dee's movies, Sandra's superiority to her elders is entirely in keeping with the way you perceive the world, and reassuring. Her life was considerably less so.

So anyway, slightly edited in hindsight, here's my re-posted piece on Sandra. 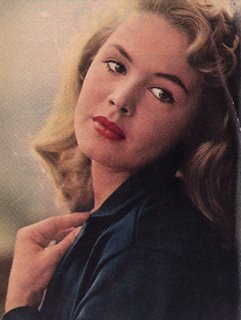 Sandra Dee died Feb. 20. A hard-luck story in death as in life, she died on the same day Hunter S. Thompson blew his brains out. Pity the priest of Gonzo, ran the snide asides, for having to share the obit page with Gidget. Mind you, it had been years since Thompson wrote anything that matched his early glories (his last piece to show much of the old brilliance was, ironically, an obituary--of Richard Nixon). In the end he was every bit the has-been Dee was, but despite his long decline, repellent personality and senseless check-out he received one thing she did not: respect.

Certain elements appear in the biography of a studio-system actress with appalling frequency. Dee's life had them all. Start, as we so often do, with the ghastly stage mother. Mary Douvan was shoving her daughter in front of cameras almost as soon as she noticed the little girl was beautiful. Dee's first modeling gig was for Girl Scouts Magazine. Impatient to start maximizing the Sandra returns, her mother started adding two years to the girl's age when she was four years old, and that lie kept going until Dee's career had long ended.

What with modeling jobs and parading the child before talent scouts, there was little time to notice the small personal details, like the fact that Mary's second husband was sexually abusing Sandra.

Some Hollywood victims of sexual abuse go flamboyantly to the bad, grabbing at alcohol or pills, flinging themselves at men only marginally better than their abusers. Dee, for her part, continued to be a good girl at home and on the set. Her success grew, as she tried to disappear. Anorexia began in adolescence and continued, off and on, until her death. In the 1990s Dee recalled days when all she ate was a head of lettuce.

Knowing Dee's background gives all those sunny movies some pronounced shadows. You start noticing how almost all her characters are trying so hard to please an older figure. The horrific mother in A Summer Place, for example, who forces Dee to submit to a gynecological exam--a rape, in effect--to see if she's still a virgin after a night with Troy Donahue. I wonder how Mary and Eugene Douvan felt watching that one in a darkened movie theater. To a viewer in 2005, the scene is mawkish hokum. Read about Dee's pathetic teenage years, and it becomes a shattering tragedy.

For those who love Imitation of Life, without question the best movie Dee ever made, the story of maid Juanita Hall and daughter Susan Kohner gives the movie its depth and sadness. Those two face the real agony of racial bigotry, while Lana Turner and Dee, as her daughter, deal only with the imitation problems of the wealthy and blonde. Yet Dee's performance deserves more consideration than that. Her confrontation with Turner, where she snaps at Turner to "stop acting" and asks for a little autonomy, echos every woman who ever looked at a neurotic, inadequate mother and decided, finally, to move on.

The year after Imitation's release Dee made Come September, met Bobby Darin on the set and later married him. Her film career began in 1957, and after 1963 it was all but over. The future held multiple miscarriages, probably linked to her eating disorder; one son, Dodd, born in 1961; a divorce from Darin in 1967; and his early death from congestive heart failure in 1973. Alcoholism followed as Dee became a near shut-in. She had never had much of a social life, anyway; people who form their parents' main source of income seldom do. "I've never had any friends," she said in 1959, "but it's like strawberry shortcake. If you've never had it, you don't miss it."

Dee, tied so tightly to Eisenhower's America as the ideal teen--the perfect date, the perfect daughter--found some acting jobs, but never could revive her career. The only thing that could put her back in the public eye was when Stockard Channing donned a blonde wig and held her up to derision with the song "Look at Me, I'm Sandra Dee" in Grease. Dee always said she thought it was funny.

You must excuse the Siren if she withholds her pity for Thompson and saves it for Sandra, whose troubles were far less of her own making.
Posted by The Siren at 3:29 PM

Dee was effective in conveying the horror she was going through in the scene you refered to in A Summer Place. Too bad Dee didn't work more with directors like Daves and Sirk.

I love how you write about the "pronounced shadows" of Dee's "sunny films." And your post does segue neatly into the Lana Turner blogathon because, as Cheryl Crane has specified in Carole Langer's TCM original documentary--"Lana Turner: A Daughter's Memoirs"--wherein Crane made note of how difficult it was to watch the scenes Lana had with Sandra Dee in "Imitation of Life" because they reminded her too much of the conflicts she was having with her mother. She would look at the screen and see the same facial expressions, hear the same things, her mother had said to her. It reached crisis proportions when Cheryl would start to giggle during her mother's scolding. Lana would yell, "What's the matter with you? Why are you laughing?" And Cheryl would admit, "Mother, I've seen this scene before...."

I read her son's biography of his parents marriage in the early 90s and it always stuck with me - not so much the picture of Bobby Darin, as of Sandra Dee - who at that point I only knew via Stockard Cahnning and Grease.

I've made a point to watch her movies since then. Knowing that little bit about her life makes her performances - even in the slightest of films - magnetic, painful and unforgettable.

A very nice tribute. I've had a soft spot for Sandra Dee ever since I was about 11 and caught her on television in her most famous (and arguably least "shadowy") role -- Gidget.

I was looking for things to put on my mom's memorial site: http://cherylwallace.blogspot.com/
when I came upon this one. Sandra Dee looked so much like my mother! Well, I'm so shocked that this blog has the SAME FORMAT as the one I've created for my mother! People used to tell me I look just like Sandra Dee also.

One of Sandra Dee's movies that is seldom mentioned is "Rosie!" from 1967, starring Rosalind Russell, Sandra Dee plays the grandaughter who stands by Rosie, who has been committed to an asylum by her two greedy daughters. I remember it being quite enjoyable.

Unknown said...
This comment has been removed by the author.
2:12 PM

Came to your site after reading our hometown chat site on nostalgia, and saw a picture of Sandra Dee and Bobby Darin. I lived Sandra Dee in my favorite "A summer place" with of course my favorite film with my absolute favorites in the world other than my too favorite James Dean. The rambling now stops, I get to ny point of thinking such high thoughts of Sandra Dee. She appeared always a perfect lady. I never knew of the tragedy of her life. We never know of what others have gone through, especially the rich and famous. I loved her in "Imitation of life" I never tire of those beautiful true to life stories.Thanks for the enlightening.

Thank you so much for stopping to comment, Granny1940. I loved Sandra Dee, a woefully underrated actress and a delightful presence in her films.