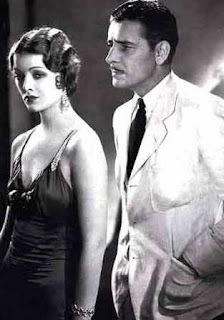 Arrowsmith (1931) is a fine example of the fact that, auteurism notwithstanding, you can't judge a film by its pedigree. This one, based on Sinclair Lewis's Pulitzer-winning book, had John Ford directing, Sidney Howard writing the screenplay, Samuel Goldwyn producing and a cast that included Ronald Colman, Helen Hayes, Richard Bennett and Myrna Loy. And it's still basically an interesting failure, proof positive that they were making dull Oscar-bait almost as soon as the awards were started.

Reviewers even at the time complained that Colman was, at forty, too old for the title part. That didn't bother the Siren so much, since practically everybody in a old-time Hollywood movie is usually too old for their parts. (The Dead End "Kids"? West Side Story?) Far more serious a drawback is that he was British down to his very garters, and here he is supposed to be an archetypal Midwesterner. As Stephen Murray of Culturedose.net points out here, the actor's chief characteristic was that he was debonair. Ronald Colman was undoubtedly debonair when he was flossing his teeth. Arrowsmith isn't debonair, he needs to be fresh and achingly earnest--someone like Lew Ayres, perhaps.

The movie's biggest problem, however, is that while Howard would do a superb job of compressing a long novel eight years later for Gone with the Wind, here what you get is a bunch of people talk, talk, talking through a series of disjointed scenes. Nobody simply acts in Arrowsmith, not without discussing the ethical and philosophical implications at great length. Yet simple human motivation remains murky. The movie lurches from one plot point to another, never giving you a good bead on Colman's Martin Arrowsmith, a high-minded doctor. He proposes to nurse Helen Hayes the day he meets her, and as if that isn't enough, in the next scene is giving up his dreams of being a medical researcher to be a GP out in the middle of nowhere, because he will need to support her. "You will be back," his mentor tells him, or rather "You veel bee back," as this mentor is Middle European (aren't they all?). And indeed Arrowsmith does come back, after his special serum cures some South Dakotan cows.

Now Arrowsmith is movin' on up, to a deluxe research facility in the sky and some of the best visuals in the movie, courtesy of Ford and cinematographer Ray June. The look of the New York office is superb and Ford, so brilliant with outdoor sequences, here uses Richard Day's sets beautifully. There's a vertigo-inducing shot of the Chrysler Building from the ground up, as Colman and Hayes try to reassure themselves that they feel at home in this vast, bustling city. A short scene later Arrowsmith emerges from the elevator and walks along the grand swoop of the office, the black-and-white constrasts and vastness of the place emphasizing him as one cog in a very, very large machine.

But Arrowsmith doesn't entirely fit in this grand place, as indeed he does not fit precisely anywhere. He develops another serum, this time for humans, and goes down to the British West Indies to test it during a plague outbreak. There is a great deal of talk about the primacy of science over mere human feelings, which in practice means he's going to give the serum to half the islanders, but not the other half. In the movie, this is clearly seen as unsentimental devotion to science and the greater good. Goatdog has a great review of Arrowsmith that includes an excellent discussion of the medical ethics then and now. Even so, a modern viewer, horrified, is likely to recall the Tuskegee experiment. Ironic, because one of the movie's virtues is the character of Oliver Marchand (Clarence Brooks), a black doctor played entirely as a devoted, dignified professional, with no shuffling, "humor" or degrading dialect added.

In her autobiography, Myrna Loy described the way Ford handled her appearance late in the movie, as Arrowsmith is inoculating the natives. You see the islanders lined up as the doctor sees them, just a series of arms one after another, until the camera lights on Loy's fair-skinned arm. The camera follows Arrowsmith's startled gaze up to that gorgeous face, and the attraction is apparent from that moment forward. That's fortunate, because while a good look at Myrna Loy is always most welcome, she has very little to do here. Goatdog also has an excellent exegesis of Loy's brief role as sexual temptation for the saintly doctor. Post-Code re-releases cut her role to almost nothing. I believe the version I saw restored most of her scenes, but you still have to be hip to 1930s innuendo to figure out what passes between her and Arrowsmith.

Ford had made more than 70 movies at this point, but Arrowsmith marks only the very beginning of his greatness. A lot of Ford's preoccupations are already well in place: The loner fighting society, yet searching for a place in it, too. The sacrifice of home comforts for the sake of a larger good. Man vs. Nature. The film seems to grow more visually sophisticated as it progresses, though the Siren has no idea if it was shot in sequence. The superb, Metropolis-like views of New York give way to the the Caribbean island and the most beautifully shot scenes in the movie, as a misty, Defoe-like procession of biers and mourners continually moves past the doorway of Arrowsmith and his wife. Later, there's an extraordinary shot of a doomed Helen Hayes sinking into a cane-back chair to smoke a cigarette, as light slants through a shutter and around her hair. Here Ford is already working out his vocabulary, and despite its many flaws, that is the best reason to see Arrowsmith.
(Cross-posted at NewCritics.)
Posted by The Siren at 3:00 PM

Noel, I really like Colman in general and he does have good moments, despite being flagrantly miscast. That scene where he throws science out the window and calls everyone in for a shot was indeed very good. Apparently in the novel Arrowsmith is quite the hard drinker, which is barely hinted at here.

Ah, they cut down on his drinking? Sounds like Henry Fonda in The Fugitive (which I liked very much).

Great post - it really makes me want to dig around for this film. Lewis was the first ever American writer to win the Nobel Prize (for this book too I think).

Anna, thanks so much for stopping by! your blog is most interesting, I have bookmarked it. I am about to do another sidebar update (gulp) and I will be happy to add it. Lewis won the Pulitzer for Arrowsmith but turned it down. I think he disliked this movie version, but he liked Dodsworth, a great movie that I also blogged about last year.

All I have read of Lewis was the rather bombastic "It Can't Happen Here."

Noel, The Fugitive is one of those movies that I have seen, but so long ago I remember almost nothing of it. The older I get the more that becomes a problem.

The Fugitive showed a few times at TCM. Read Greene's novel too, and while Ford cleaned it up some (unavoidable, or so I heard), I think it retains its power. I don't hear much about it from auteurists, tho--it doesn't enjoy the rep of, say, The Searchers.

Good review, there, campaspe. I remember liking Lewis's Arrowsmith way back when, and was always curious to see this movie, but was worried that it might be dull or misguided. Now I'm still curious, but at least I'll know what to expect. I didn't even realize till now that it was a John Ford.

Thanks guys! I had only vaguely heard of this film and sat down to watch it with no very lively hope of its being all that good, but I was impressed by how beautiful it looked. Jeff, if the script gets on your nerves when you see it, you could always turn the sound down like Wolcott says he did.