Did I Remember to Tell You ... (Movies in Brief)

The Siren is very, very hung up on proper writing and essay construction, and she sometimes forgets that this isn't what blogs are always about. So from time to time she plans to offer some brief takes on movies viewed over about a 20-month period. 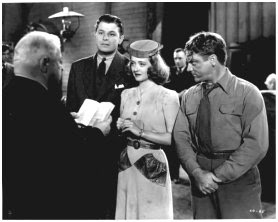 Inaugural post: The Bride Came C.O.D. (1941). Screwball well past its sell-by date, with two very, very great actors, Bette Davis and James Cagney, who simply didn't have the gossamer touch for this sort of thing. Bette Davis (who had just gotten married in real life) looks glowingly pretty, but watching her posterior plunk into a cactus plant--twice--feels like lèse majesté. From a distance of more than 60 years, you want to yell, "Bette! They can't treat you like that!" This time the talented Epstein brothers seem to have had no script ideas beyond "rough up the dame! it'll slay 'em!" They made Davis's character unbearable as well as unbelievable--the sort of spoiled heiress who finds herself in an airplane going someplace she doesn't want to go, and reacts by trying to parachute out. In high heels. Cagney has some appeal here, but his main job is to react to the heiress's latest piece of idiocy. Then he has to convince you he has fallen in love with her. He fails. The great Jack Carson, one of the Siren's pet character actors, gets almost nothing to do. Overall, a catastrophe.
Posted by The Siren at 11:51 AM

Joe said...
This comment has been removed by the author.
2:05 AM

"The great Jack Carson..." Couldn't agree more - never a bad performance, no matter the role. Its always nice to see him listed in the cast - he seemed to know just how far to go without being over the top. Going from Arsenic and Old Lace to Mildred Pierce 12 months later shows the depth of his "character" acting.

Operator, I love Carson in just about everything and he's as good as he can be in this movie. Another favorite Carson performance: "The Strawberry Blonde."

Any movie that doesn't know what to do with Jack Carson doesn't count as a movie. And, Siren? Strawbery Blonde, Amen!

Respectfully disagree about "The Bride Came COD". I thought it was a spectacularly good screwball comedy that compares favorably to movies on the canon of that genre like "His Girl Friday".