Goatdog's 1927 Blog-a-thon: Flesh and the Devil 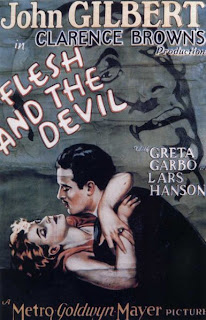 (This marks the Siren's slightly belated contribution to Goatdog's 1927 Blog-a-thon, which was this past weekend. Please follow the link to Goatdog's place and read the other contributions as well, for a wonderful trip in the 80-years-back machine.)

Why is the word "modern" considered an accolade, much less the word "realistic"? When she wants modern, the Siren watches modern. Most of the time, the Siren prefers old-fashioned things, like romance and superimposition shots and duels filmed in silhouette. There are times when it is a good thing to show your age. When you're a bottle of vintage port, for example, or when you're a rare manuscript, or when you are 61 years old but, by God, you are Helen Mirren. And, the Siren would argue, it is a fine and glorious thing to show your age when you're a silent movie like Flesh and the Devil. Very little of this movie's atmosphere or plot smacks of 1927 (or 1926, when it was filmed) and in fact there are some decidedly 19th-century aspects to it. The clothes are 1920s-looking, but the rooms are lit by candles, people travel via horses and the settings are military boarding schools, castles and the like. 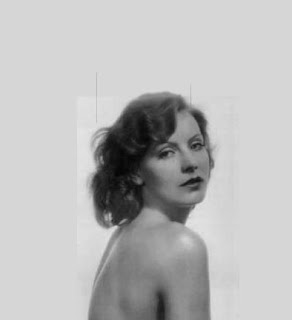 To put it mildly, there is a lot of baggage attached to this one. Baggage, hell, it drags a freight train full of Hollywood history, foreshadowing and hindsight into your living room the second you hit "play." This lavish MGM production was made to showcase the pairing of their most valuable male star, John Gilbert, and their soaring new female star, Greta Garbo. When Flesh and the Devil was released in early January 1927, The Jazz Singer was only 10 months away, and Gilbert's great period of stardom had only a couple more years to run. 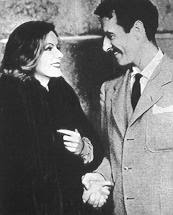 In less than a decade Gilbert would be dead--of a broken heart, said his friends; of cardiac arrest brought on acute alcoholism, said the doctors. Garbo, for her part, was just three films into a Hollywood career that would defy all attempts at comparison, then or since.

The movie also began their celebrated love affair, though some maintain that was more image than reality. Maybe. For those who argue Gilbert-Garbo was the real romantic deal, Flesh and the Devil is mighty strong evidence. Gilbert caresses a flower stolen from Garbo's bouquet, Garbo purses her lips slightly to light a cigarette, they play a horizontal love scene as Garbo hovers over her man's face and kisses him with lips slightly parted. Eighty years on, the erotic charge between these two still flashes off the screen, despite the older acting style, despite the 1920s fashion for putting lipstick on a leading man.

Going strictly by the plot, the true love in the movie is between John Gilbert's character, Leo von Harden, and his best friend, Ulrich von Eltz, played by Lars Hanson. Their attachment probably draws some titters from "sophisticated" audiences unacquainted with eras when passionate declarations of love and fidelity weren't limited to those sharing a bed. It is a movie truth universally acknowledged, however, that two single men in possession of a good friendship must be in want of a vamp. So here comes Felicitas (Garbo, of course), ready to fascinate and seduce Gilbert from the moment he spots her at a train station. 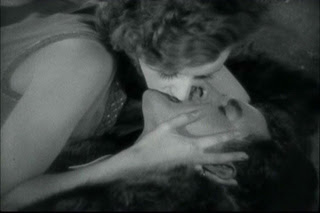 They meet again, they waltz, they smoke and then they burn. Gilbert tosses a lit cigarette out the window, alerting Garbo's husband, Count von Rhaden (Marc McDermott), to the goings-on in his wife's boudoir. Husband? did she mention a husband? Gosh, no, she didn't, but there he is in the doorway, giving director Clarence Brown a marvelous shot--a Garbo-Gilbert clinch viewed through the wronged husband's outstretched fingers. A duel must follow, of course, and its filming is justly celebrated. We see it in long shot, the actors as silhouettes. Leo and von Rhaden march ten paces to the side of the screen, each stops just out of the frame, and we see two puffs of smoke.

Next shot ... Garbo, trying on mourning bonnets, the slightest of smiles on her face as she decides which veil is the most becoming. A perfect sequence, in 1927 or any other era.

Gilbert is exiled for five years. To protect the honor of Felicitas, he pretends the duel was about a dispute at cards. Hanson is enlisted to take care of Felicitas while his friend spends a few years in South Africa living in a hut. Okay, take a wild guess what happens next. Why, yes, that's exactly right. Hanson falls in love with Garbo, and they marry. Flesh and the Devil has many virtues; a surprising, twisty plot ain't one of 'em. So Leo comes back, but the love between him and Felicitas still burns. Leo is determined not to betray his friend, but Felicitas has other ideas.

Ah, this movie is lovely to look at, delightful to behold. Visual techniques of silent film were at an incredibly high point, about to plummet back to ground-bound staginess when the talkie craze took over. Shot after shot from William Daniels, who also lensed Greed and The Merry Widow, makes you want to pause the film and drink it in, whether it's a view across a frozen lake to an island with a man-made folly on it, or a simple close-up of Garbo's silk shoes, covered with snow. (Legend has it that the ethereal beauty had big, decidedly clod-hopping feet. To the Siren, Garbo's feet look fine, but her gams were no threat to Marlene.) Cedric Gibbons did the art direction and gave the interiors that certain fairy-tale look common to MGM's every depiction of aristocratic life.

Gilbert gets dissed quite a bit by modern critics, and the Siren isn't sure why. He is very dashing and handsome, less effete than Valentino if less menacing than Barrymore. As for Garbo, most critics note that she was sui generis, a brand-new type for the movies. 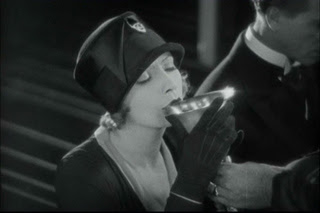 The Siren adds that this quality was Garbo's alone, not the script. Felicitas is written as a man-eating vamp like dozens of others in films of the era. It is the actress who conveys a soul behind the frippery. Favorite moment, for the Siren: Garbo nonchalantly touching up her lipstick, as a priest denounces her from the pulpit as a modern-day Bathsheba. Second-favorite, minutes later: the priest passes the communion cup, adjusting the rim to give each family member an untouched place to sip. Garbo stops him, turns the rim back to where Gilbert's lips had just touched it, and drinks from that spot. Her body and the angle of her head are perfectly ladylike and composed, but her expression of abandon is worthy of Salome. (Now there is a part Garbo could have torn up.)

Among the cast is an ingenue named Barbara Kent, playing Hanson's sister Hertha. Her pure unselfish love for Gilbert must compete with the evil, manipulative Felicitas, and naturally Hertha doesn't stand a chance. She is rather charming, however, her tiny frame used to compose several amusing shots. She survived the talkie transition and made some other pictures, including the 1932 Vanity Fair and the 1933 Oliver Twist, then retired from the screen in 1949. Incredibly, she is still alive today, having turned 101 on Dec. 16. According to Wikipedia, she is one of only three prominent silent players still surviving, the others being Anita Page (age 96) and Dorothy Janis (who turned 97 on Feb. 19). Alas, Ms. Kent refuses all interviews. Still, it is wonderful to think that somewhere in Idaho there lives a link to the more sumptuous, romantic world of 1927 and this film.
Posted by The Siren at 3:39 PM

Siren, this is gorgeous. Thank you for contributing it.

Her character's name is Felicitas? That is simply the coolest thing I've heard all week, since in my mind that Garbo brand of bliss has so little to do with the dictionary definition of "felicity." Have you had a chance to read Mick LaSalle's Complicated Women yet? It's partly structured around the idea of Garbo-as-something-new.

I always enjoy your take on things. And you are certainly right, the film feels as though it plays a bit loose as to what time period it is actually in, but Garbo transcends all time periods anyway, so whats not to love.

The DVD of this film is a great package. The best part for me is the alternative ending, even though the director hated tacking on a happy and cheesy finish. It shows Gilbert running after Hertha's car to keep her from going away and the Carl Davis score, the cinematography, everything, is so stunning it makes you want to weep.

Goatdog: no, haven't read Complicated Women yet. Should order it soon. Yeah, her name is great and it gets played on a lot during the course of the movie, as when Gilbert is returning from S.A. and hears the boat engine, the horse hooves, the train cars clattering out "Felicitas."

Operator: perfectly put! Garbo belongs to all time and no time. You feel that you could plunk her into any age and she would fascinate.

Anna: I liked the movie so much I watched all the extras, something I usually do not bother with. The alternate ending was not nearly as bad as I had feared. It was well played, it was just that it didn't jibe with the melancholy feel of the rest of the movie. Brown was right to prefer his ending.

I have not seen it, but I read that "Love," the Gilbert-Garbo version of Anna Karenina, also contains a happy ending. Now THAT must be incongruous as all hell.

Several years (decades) ago there was a season of Garbo films on British TV where we were treated to the likes of this and A Woman of Affairs plus early sound films like Mata Hari, Susan Lenox (her Rise and Fall) and it was clear that this was a woman who will never be bettered for sheer presence.

BTW, this is an excellent blog.

oh, I have never seen Susan Lenox! there are several others I still want to see. This film came as a part of a set and I am looking forward to the others.

(thank you very much for the kind words!)