Foreign Film of the Week: Week 2

The Siren is having a hard time staying on top of blogging at length, but at least she got in her foreign film of the week. It is really depressing when a New Year's Resolution is gone before the mid-point of January

Last week's movie, sent by Flickhead, whose thoughts on the movie are located here: A Talking Picture, directed by Manuel Oliveira. 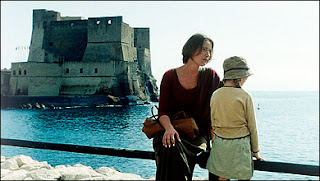 What's missing from the table and from much of the picture, of course, is the true (truer, anyway) cradle of humanity, basis of much of even Greek civilization, the Middle East. Iraq, Iran, Syria, Egypt among others are not represented, and while Egypt's monuments are shown and discussed, they're discussed not by an Egyptian but by a Portugese. The silence is overwhelming; we hear secondhand about Muslim civilizations, usually as it relates to and clashes with Western civilizations (the Hagia Sophia, Napoleon visiting the pyramids, the Arabs burning the library at Alexandria (a historically disputed event)). Suddenly the Middle East speaks out (or at least we assume it's from the Mid-East--Oliveira leaves even this ambiguous), in the form of a ship's officer with an urgent message, and the entire ship is forced to react to a neglected
culture's startling response.

Labels: Foreign Film of the Week

I think Noel Vera misunderstands ''A Talking Picture'', the film is highly ironic and not a realist film. It obviously deals with an European perspective and the cradle of which is Greece classically speaking.

Oliveira's vision of the world is very complex. Despite the very light surface of his film, his real subject is that the world is on the brink of an abyss, one he holds Europe responsible for making. His films aren't conventional either so just because the bomb blows up after they pass Egypt of course doesn't mean that it comes from Egypt.

Sudarshan, I am a bit confused, because Noel makes the point that the source of the bomb is ambiguous, and that the West's failure to understand the Mideast is a large part of the film as well. Nor does he call it a realist film at any point. It would probably helpd to read his review in full; I just picked the most striking graf.

BTW, the bomb blows up after they pass Aden in Yemen, not Egypt.

I have mixed feelings about the film, but that dinner scene with each woman speaking her native language was intriguing.

Peter, I agree. I really admired the film's defiantly static camera, meticulous composition and symmetry, with the prow of the ship being used like a curtain. But for me it didn't really come into its own until the dinner scene.

LOL, Flickhead, at least I did watch! there are a handful of films I've been sent that I still haven't. As I tried to explain in my post on the subject, I suck.

Your taste in film rocks, however. This one was well worth it, even if I preferred Je Rentre a la Maison.

His Voyage to the Beginning of the World with Marcello is wildly nostalgic and excellent. And The Convent is great fun and quite creepy.

The table of Malkovich, Sandrelli, Deneuve, and Pappas is amazing, if only for the echoes of all the films those great ladies have made. I made sure to record Pappas' a capella song before I returned the DVD to the library. But then, I have always been in love with Irene Pappas even without knowing how beautifully she sings.

The film itself is a meditation on the presence of history and the ending is telegraphed, at least for this viewer, way before it comes. The ending was a disappointment. Much too pat.

I really like the late works of artists no matter what field. They no longer have anything to prove and have great chops that they can bring to bear on any subject they choose. The quiet and pacing of this film reminds me a little of "A Tale of the Wind" by Joris Ivens.

Hola Siren, am flabbergasted you picked my scribbled notes on an Oliviera film. Great film by the way (Mr Sudarshan and I may not agree, but I at least hope he picked up that I loved the pictue).

He does make a point I probably failed to make clear: that this is a world on the brink of an abyss. Could very well relate to Renoir's Rules of the Game, at least in tone and spirit (lighthearted mask worn in the face of despair).

Think about that for a minute.

He is highly idiosyncratic. Among those I reccomend: I'm Going Home (a great film about old age by a REALLY old man), Voyage to the End of the World, Party, La Lettre (a marvelous version of "La Princese de Cleves" starring Chira Mastroianni), Le Soulier de Satin, Belle Toujours (his sequel to the Bunuel), and Mon Cas (an indescribably theatrical jape starring Bulle Ogier.)

At the start of his career (which began in the early 30') de Oliveira had many setbacks, resulting in many years between projects. By the 1970's his pace picked up considerable. I recent times he's made as many as two films a year.

Here's his filmography -- As you can see he has two films in post-production already this year.