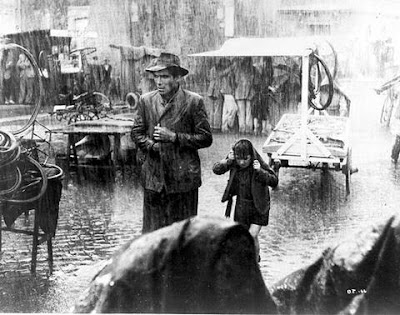 A movie blogger urging readers to go see The Bicycle Thief on a big screen is like a book reviewer urging people to check out this Faulkner fellow. But so perfect was the Siren's experience of this masterpiece, which is playing in a remastered version at Lincoln Plaza through Nov. 20, that she would feel churlish if she didn't urge her New York readers to go. The Siren had not seen Vittorio de Sica's masterpiece since the days when she could be found most weekends searching for a seat with no spring damage at Theatre 80 St Marks. Even in the rear-projection, odd-angle St Marks venue the Siren loved The Bicycle Thief. But oh, the bliss of seeing it again in a movie theatre, even with an imperfect print.
I could take in Lamberto Maggiorani's shoulder blades poking into his thin jacket, the way Enzo Staiola's mini-grownup face crumples back into heartbroken toddlerhood at a blow from his frustrated father, feel again the incredible release in the beautiful shot of the boy at the top of a staircase, just as we begin to share Maggiorani's fear that he has drowned.

The Bicycle Thief is much concerned with the burdens of family, piled onto viewers with scenes such as Maggiorani's infant on a bed, its exposed legs miserably thin. Just the sight of the baby alone would underline the man's desperation.

But the movie is also about the consolations of family, as a son's hand becomes the sole barrier to complete despair.

You could do much worse with your weekend. Just go see it again, all right?
Posted by The Siren at 9:30 PM

It's a bit of a drive, so I'll wait until it's more planetarily convenient for me, but it sounds like a plan.

Nice for us to go back to canonical classics with GWTW in last post and now Bicycle Thieves.

Okay...here's the secret...I have never seen the film in all my years as a cinephile. I've seen Rossellini and Visconti and Antonioni and Bertolucci, and Pasolini but not once have I seen Bicycle Thieves. Yes, I bear a most damnable secret shame for all these years and only now have felt the need to confess. I'm not in New York but I promise to see it before the year is out.

Uncle Gustav said...
This comment has been removed by the author.
9:20 AM

Haven't seen (The) Bicycle Thief(ves) in agesut was fortunate to have seen it on the big screen. A memorable experience. I'm wondering whether its subject matter along with Umberto D has become so remote from "highbrow" experience and concerns that they might respond with contentless words like "manipulative." What art does not provoke the emotions of the audience? I'm reading Bassani's Garden of the Finzi-Continis just now and plan to give the film a re-see

Actually, speaking of remastered prints, I have an extra ticket to see The Red Shoes tonight at Film Forum, 7 PM show. My ballet-dancing nephew, who was supposed to go, has come down with the flu (get better, Gabriel!).

Anyone wanna go with me?

Damn, Karen, if only the Concorde was still flying!

That WOULD be the way to arrive at a film like that in style!

P.S. Verification word:
"Unmentsu" which is of course Mizoguchi's famous lost never-to-be-discussed sequel to you know what.

Wish I could go, though I must say I prefer Umberto D. Fike! Fike!

After all these years the film has lost none of its power.


I don't find "emotional simplicity" in it at all. It's pure emotion.

If you're not moved by it repair to the nearest emergency room. You're dead and you just don't know it.

There's one scene that I always remember - the pawn shop with the sheets piled to the ceiling. What an incredible image of post-War deprivation.

New topic.
Dargis redux:
(No, not Manohla this time, just an incredible simulation.)

”But the success of “Twilight” has blurred if not buried Ms. Stewart’s blossoming reputation as a skilled actress. Aside from the overtly commercial nature of the franchise, the subject matter — vampires that sparkle, gym-sculptured werewolves and computer-generated effects — tends to turn the noses of cinema’s auteur elite skyward.” (my italics)

Standard operating procedure for all cultural writing at the Times, Y. I'm sure there's a data base of such phrases available at the stroke of a single key.

found you through breitbard-avrech column. is you banner girl tierney or fontaine?

This is one of those days I wished I lived in NYC rather than Denver. I love that movie.

Just caught up with 500 Days of Summer. Besides being a monument to the awe-inspiring beauty of Joseph Gordon-Levitt, this is a superb romantic comedy (wiht musical numbers) with parallels to both Resnias' Je t'aime Je t'aime and Charlie Kaufman's Eternal Sunshine of the Spotless mind. Worth seeing alone for Zooey Deschanel's Karaoke rendition of "Sugartown" it's that exceedingly rare work about Women Who Won't Commit.

If we’re going off-topic, hear, hear on the adorable Zooey Deschanel. I think she is nothing short of miraculous. There’s a scene in Almost Famous towards the end when rock star Billy Crudup enters her house by mistake – she just looks wordlessly, quizzically at him then suddenly cocks a hip, as in, “Hello, sailor, new in town?” It’s one those of moments for the cinematic ages.

Further off-topic: Saw Nine last night. Oh, dear, oh, dear. So much effort, so much money, so much talent thrown at what was always at bottom a mediocre Broadway Musical, to produce an even more mediocre movie. Forcing oneself to watch it is to recognize once and for all that the music for this show is beyond unremarkable, it is in fact remarkably bad; the lyrics, even worse. I would have walked out whistling the scenery but for the fact it was shot on a bare sound stage in Cinecitta so there is no scenery to whistle. As it was I came away with two clear messages:

1) Daniel Day-Lewis, who last year gave a performance in There Will Be Blood which nailed you to your seat by its overwhelming brilliance and power is equally capable of delivering a performance which nails you to your seat by its unutterable awfulness.
And 2) The mere notion of re-making 8 ½ as a so-called musical film is akin to handing a six-inch paint roller to five-year-old and telling him to repaint the Sistine Chapel.

I have, however, no doubt that the Weinstein publicity machine will get it nominated in this year’s enlarged Best Picture category; neither would I be surprised if it won. Such is the standard of today’s cinema.

Nine? When did this terrible thing happen? Was there no warning?

Since we've been in a musically degenernative state (contra Darwin) for the last fifty years or so (as musicals go, amorphous vocal lines wandering aimlessly until they stumble on the nearest cliche) it seems redundant to speak of mediocrity.

By the way, why is it called Nine? Humility before the original? (Not a chance) Or just the sheer dumbness that engenders titles like Snakes on a Plane and Rocky Balboa.

True, my comment on mediocrity does sort of belong in the Department of Redundancy Department.

Wait - isn't there a Broadway musical in the works based on "Snakes on a Plane"? Then it'll come out as a musical movie in a few years, to suck the last kopek outta the ones born every minute's pockets. Oh, my mistake. Maybe it was a "Transformers" musical I was thinking of, to satiate the mouth-breathers. Or "Saw"?

Or maybe it's Plan 10 From Outer Space.

Truly, I think the creative spirits who gave us Nine thought they were IMPROVING on 8 1/2

I believe Rob Marshall’s projects in development include Two-and-a-half Rode Together; Three for the Seesaw;; Four Godfathers; 5 for Texas; Six Against the House, all the way to 13 Angry Men
I, for two, can’t wait.

Saw Marshall's "Chicago" and thought the sets were nice but he's a choreographer who has completely forgotten Fred Astaire's rule that you have to shoot a dancer in full and not do close ups of hands or feet or faces (or T and A for that matter).

Saw some of "Nine" on the Oprah promotion for it. Indeed, the songs are unremarkable and that's what a musical should be all about, isn't it?

Rob Marshall and Baz Luhrmann are just terrible moviemakers. Now if you want to see some good movie music and dance, check out Carlos Saura's work.

And does anybody know where "The Lovers of Teruel" is these days? Saw it once, if memory serves, at the Thalia with Ludmilla Tchérina looking even more beautiful 14 years after "The Red Shoes."

Hear, hear on Saura's Tango & Flamenco, I watch them at least two or three times a year.

The Lovers of Teruel is available at Amazon in 'used' VHS - or it was 10 minutes ago.

Sorry, this is one of the worst, depressing movies I've ever seen. All those thousands of bikes and the sadistic author can't let the protagonist have one?

All of the actors are excellent in their roles, but it is Lamberto who leaves the strongest impression. His performance is dead-on perfect.
Chiropractor in Boulder

This is a topic of my interest. I love reading through your blog, I wanted to leave a little comment to support you and wish you a good continuation
Valeting Edinburgh
Website design edinburgh