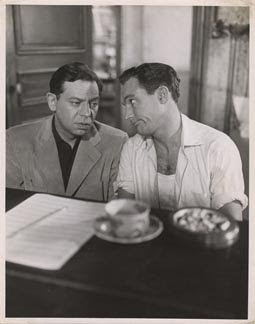 My old friend Irving Kolodin gave my Tschaikowsky recording a bad review in the Saturday Review, of which he is musical editor. Later he called me up in California and asked, "Is there anything I can do for you?"

"Yeah," I said, "give me a good review of the Tschaikowsky."

On one of my recent trips to New York, I had dinner with Irving and his wife. The next day, wanting some reassurance, I called him and asked, "How was I at dinner last night?"

I hadn't wanted a one-word review of dinner.

--Oscar Levant, Memoirs of an Amnesiac

The Siren's one-word review of her inclusion in Film Comment's roundup, "It's Alive! The Top Film Criticism Sites: An Annotated Blog Roll": flabbergasted?...grateful?...flattered as all hell?

Well, writing short was always the Siren's weak spot. Many, many thanks to Paul Brunick and Brynn White. The Siren will try to live up to that write-up, and the stratospheric standards set by the distinguished company in which they have seen fit to include her.

And please read Paul's call for online and old-school media to learn to live together with peace, brotherly love and cuckoo clocks instead of squabbling over who ate the last of the film-critical pie. It is persuasive, witty, sensible and very much worth your time. 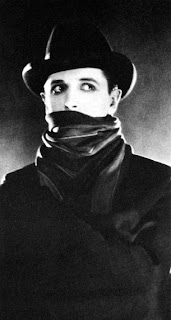 Meanwhile, Donna Hill of Strictly Vintage Hollywood has alerted the Siren to a campaign by the British Film Institute to restore and preserve the nine silent films made by Alfred Hitchcock. The Siren plans to give, and hopes her generous readers will do the same. Details on the films are here and the donation link is right here.

When I was but a wee tyke Oscar levant was an almost-constant presence on the tube. How well I recall this couched, smoking figure -- his whole vibrating with all manner of "the jitters" -- spewing after mot juste on the Jack Paar Show. "THIS is Adulthood!" I thought to myself happily. Seeing him in less-vibrating (but still vibrant) form in An American in Paris and The Bandwagon only confirmed Oscar's status as a Totemic Elder. This was driven home even more by Donald O'Conner's casual remark that in Singin' in the Rain he was playing "the Oscar Levant role" of best friend to Gene Kelly.

Richard Avendon's portrait of Levant shortly before his passing looks as if Francis Bacon had grabbed the camera at the last minute.

It was most fitting that Candice Bergen found the body. Lovely to think of a beautiful and intelligent woman discovering Oscar just as he left us all. Perhaps his spirit had a last look at Candy on its way out (as in the last shot of Gus Van Sant's Last Days)

David, the affection with which any mention of Oscar is greeted on this blog is a source of great joy to me.

Oscar Levant rocks! He's awesome sparring with Groucho Marx and Al Jolson on all these Marx brothers album radio shows I have - "A Mink for Jolson," "A baseball team for Jolson" etc.

Oscar Levant strikes me as one of those actors who didn't need introduction. Like in ''The Cobweb''(which I think is beyond doubt Minnelli's most underrated film masterpiece) his body immediately tells you all about this character so much so that when his legendary breakdown in a hydrovat comes(done as most scenes in this film, in one take) it's like an aria almost. And I liked him best of all the cast in ''An American in Paris''.

And congratulations on appearing on the great pages of Film Comment.

Somewhere, Oscar and Severn Darden are trading acid quips and hilarious bons mot. One can dream.

My favorite Levant moment: seated between Kelly and Guetary as they rhapsodize over Leslie C. No need to describe it, everyone knows the scene is all Oscar's.

Only Levant's participation could make me actually want to hear the Tchaik Cto. 1.

In The Cobweb Oscar suffers from a male version of that 1950s housewife's affliction "the problem that has no name." Being so left of center had its drawbacks for him, but the upside is that it made him a brilliant musician, fine dramatic actor and one of the best comedic sidekicks ever. I love him.

For me, Sinatra's version of "Blame It On My Youth" will always be tops. :) Though that Jamie Cullen one is very nice.

Congratulations Siren on topping Film Comment's list. Since they mention you're a Sirk fan (and I know there are other Sirk fans here), I'll bang my drum once more and mention that All That Heaven Allows has now been entirely screencapped and you can find a few thousand pictures of Jane Wyman and Rock Hudson at http://paulasmoviepage.shutterfly.com/

You're on the TOP of that Film Comment list, Siren. Well deserved and congratulations! The write-up is superb. I would add that readers never have to suffer clichés like "this summer's best thrill ride".

Erich, thanks so muchh, and congratulations to you on Acidemic's inclusion.

Arthur, thanks, and it's good to see you back! You love I love Minnelli too but I always thought cutting out the American in Paris scene where it's suggested that Levant will be Nina Foch's next "protege" was a great mistake.

Vanwall, what a lovely thought.

Paula and Trish, thanks so much. I love the All That Heaven Allows screen caps, Paula; such a gorgeous, gorgeous movie.

You Tube has a number of great clips.

Oscar, shut up and sit down, we have more important matters to discuss.
(Oscar would absolutely agree.)

So our Fearless Leader has appeared on a list of excellence in perhaps the only remaining film journal in these Benighted States meriting the adjective ‘prestigious’. So? Not only is she on the list, but at the top thereof, as in number one.
The question begs again… So?

Is there anyone here present surprised by this development? Show of hands? Anyone? I thought not. This is the best cocktail-party I was ever at, and no lie.

I think I speak for the room when I say, dear lady, we all love you TrulyMadlyDeeply and we are so-o-o fucking proud of you it doesn’t bear telling!

Siren, no shame in liking the tchaik 1, but compare the opening splurge of chords to those at the beginning of Rachmaninoff's Cto. 2 which leaves the former sounding like a baby splashing around in the bath. Likewise the intensifying organic growth of the first subject vs. the To-nite we love tune. No comparison. The development of the Tchaikovsky doesn't have the formal or dramatic cogency of the Rachmaninoff either.

I think Oscar Levant's work as a composer is not as widely known as it should... maybe because he was the first one not to take himself too seriously.

But well... he wrote opera! Even if it was for Charlie Chan at the Opera

Yojimboen, you are much too kind, as is your wont.

Gloria, I need to hear more of the music that Levant wrote, definitely.

Never cared much for Film Comment, especially after they published a Bernard Herrmann memorial tribute with forty or fifty obvious errors and never bothered to acknowledge my corrections (or anybody else's). But they got it right this time! Congrats.

Wonderful and well deserved, Siren. As I've said many time here and on my blog, your work is essential for those of us who love the movies.

Further congrats on A Better Man, which was screened at the San Francisco Silent Film Festival. Important not only because it manifests the giving advocated by you and Marilyn; but, because it is one of the earliest positive images of a Mexican in film that I've ever seen. Much appreciated.