Anecdote of the Week: You Can Post From Paris, but Not Everything Can Be Exported 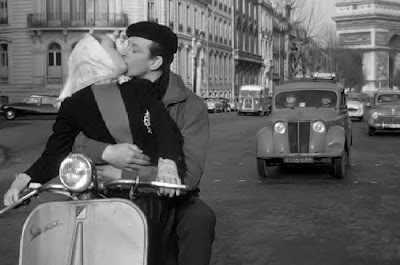 As she's mentioned approximately 1,348 times in various social media, the Siren is off to Paris today for a visit with the in-laws. The Siren hates air travel--how heretical of her--but comforts herself with the notion that she could have in-laws in, say, Phenix City, Ala., a town where her father used to try cases and come back muttering that the movie flattered the place. (The Siren hastens to add for any readers in Phenix City that this was 25 years ago and Daddy may have missed the renaissance.)

The Siren always tries to do some shopping in Paris, however small, so here is a small anecdote regarding the perils of that pastime, from Billy Wilder in Hollywood by Maurice Zolotow.

Much of Love in the Afternoon was filmed on location in Paris. While Billy was over there, Audrey [Wilder] suddenly got the most irresistible craving for...a bidet! She had to have a bidet. She could not live without her very own bidet in the master bedroom. She cabled Billy to purchase a bidet and ship it to their Westwood apartment. Unable to locate a French plumbing supply firm which exported bidets, Wilder replied: IMPOSSIBLE TO OBTAIN BIDET STOP SUGGEST YOU DO HANDSTANDS IN SHOWER.

Over at Awards Daily, there is a poll about the Most Influential Film Critics. What struck the Siren about this poll is that there are only about a half-dozen, give or take, critics on the list whose good opinion is enough to get her watching. She won't tell you who they are, with two exceptions. Obviously the Siren's TCM tovarich Lou Lumenick carries much weight with her.

And then there is Glenn Kenny, the only critic named for an individual blog. The Siren suggests you go over and take the poll for the sake of voting for Glenn. The honor of the blogosphere compels you.

The poll, of course, is looking at which critics carry weight with the largest number of people (and in Oscar balloting, which to the Siren is like Kremlinology, only less transparent). But applying it to your own reading is an interesting exercise, and it made the Siren realize most of the critics left off the poll who wield substantial influence over her are either Web-based or have a large Web presence. Her own list would include (but is by no means limited to) Kim Morgan, Dennis Cozzalio, David Cairns, Dan Callahan, Peter Nelhaus, Tony Dayoub, Vadim Rizov, Dan Sallitt, Keith Uhlich, Jim Emerson, David Ehrenstein, Flickhead, Tom Shone and Girish Shambu. There are also wider-ranging bloggers whose film forays the Siren loves, such as James Wolcott (yes, I know he's primarily Vanity Fair, but he's a primo blogger so we like to claim him), Lance Mannion and Sheila O'Malley. And there's a few who've gone silent of late, but still make the Siren snap to attention when they do say something, like Filmbrain and Michael Phillips. These critics often share the Siren's tastes, but a lot of them also tend to like all sorts of things the Siren most definitely does not. They're all a pleasure to read, though, and often that's all it takes. Don't you think?

By that standard, the Siren could also name a lot of her commenters for that poll.

The Siren must now return to staring at her suitcases and waiting for them to speak up and tell her what she forgot. Before she leaves, one more critic who belonged on that poll had anyone consulted the Siren: Stephen Whitty. Please check out Stephen's marvelous exchange with Joan Lowell Smith, who once shared Hollywood digs with goddess-in-the-making Kim Novak.

That's all from Brooklyn for now. The Siren will be posting from Paris at her usual erratic rate. See you soon.
Posted by The Siren at 11:28 AM

Enjoy, Siren! (I hope one day to visit France myself so perhaps we could compare notes, share impressions, etc.)

Thanks for the mention! Have a pleasant trip.

Yes, I had a hard time coming up with 10 from that poll. I got four or five, and then had to go with people I didn't disregard completely. Had your annotations been added, I'd've had no trouble filling out the poll.

Thank you for the kind words. You're the bee's knees.

Next time I'm in NY -- we're going to have a double feature of John Garfield -- at Julie Garfield's place. I'm setting it up right now...

Kim said...
This comment has been removed by the author.
2:27 PM

Ah, Gay Purr-ee! May you enjoy every moment! And thanks so much for the mention too. I will see Kim's bee knees and dare to include the ankles and feetsies too!

You will never guess what I'm finally near finished transcribing, a mere two-and-a-half months later. A lovely reading present for your vacation, if I'm lucky, and for sure for your safe return home.

Have a great time!

P.S. Just spotted that your pal Lumenick ends his review of Barf Curse Loathe with this line: "Any movie where the protagonist's biggest problem is whether or not to split her time between New York and Bali is inherently going to be as profound as perfume." Hey, wait a minute...

DavidEhrenstein said...
This comment has been removed by the author.
5:10 PM

Where are you staying in Paris?

I was there twice and both times stayed in hotels in the Place de la Bastille area. As a result Christophe honore's Les Chansons d'amour has a special resonance for me.

The first time I came over I went straight from the airport to the Champs d'elysee to meet a firend and when I got out of the cab I found myself in the exact spot where Fred Astaire stood at the start of the "Bonjour Paris!" number from Funny Face.

A few days later In was having a very late lunch (my time sense still askew) and a very nice left bak restaurant. All of a sudden Bulle Ogiet came in and sat down at a table across the room from me. Les than a minute later Jacques Rivette came in and sat down with her. They were engaged in lively conversation for the next hour or so. I of course didn't dare to try and eavesdrop. The spectacle of the two of them was more than enough.

On that trip I saw Ogier with Madeline Renaud in Maguerite Duras' play Savannah Bay.

Best of all I saw Patrice Chereau's production of Genet's The Screen with Maria Casares (who made her entrance from the audience standing right next to my aisle seat), David Bennent(the little boy from The Tin Drum), Hermione Karagheuz (of Out 1 and Duelle fame), Hamoun Graaia (one of Chereau's most talented boyfriends), and Pierre Malet (of the Malet twins. In the immortal words of Mickey Cottrell, "Leave it to Chereau to fall for the Rough Trade twin.)

The second time I went to paris I saw Jeanne Moreau in Le Recit de la servante Zerline -- her one-woman show adapted from a chapter of Hermann Broch's "The Guiltless."

My friend Dennis Cooper has been living in France for the past six years. Known to "the happy few" in the U.S. he is a MAJOR literary star in France. Cahterine Robbe-Grillet has adapted several of his stories into stage piece. One or two of them may be playing there right no. A very talented director named Giselle Vienne has been working with Dennis on much more lavish stage peice. Their latest, "This is How You Will Disappear" premiered in Avignon last month. It's going to be coming to Paris shortly. Dennis has a small but pivotal role in Christophe Honore's latest film L'Homme au Bain. It should be running there right now. It stars Chiara Mastroianni and Francois Sagat -- France's top gay porn star. Honore has apparently got him to act.

If any of the new fashion designers are havig shows try to get to see them. Fashion shows are the new avant-garde art form.

Billy Wilder always had the last word. His tombstone reads:

Billy Wilder
I'm a Writer
but then
Nobody's Perfect

I took a photo.

Jack Lemmon's grave is nearby. His tombstone reads:

That is, if my memory serves.

Thanks for the mention! Have a good time, or at least as good a time as possible. Bonjour to Jad.

Bon voyage, mon amie! Have some ice cream at the Berthillon on the Ile St Louis for me, will you??

Zsa Zsa has asked for the last rites.

An era is ending.

Thanks for the nice mention, Siren!

Have a wonderful trip!!

Ahh... quelle bonne chance... to go to Paris. In August yet -- will anything be open? "According to the weather report" current temperature is 57 degrees and it's raining, so so much for "Paris When It Sizzles." Have a marvelous time with the 57 Million Frenchmen (and women). :)

Have a great time, even if the real Paris isn't as good as Paramount's Paris (to paraphrase Ernst Lubitsch).

Watching with fascination a damn-near unrecognizable rapin' and pillagin' George Saunders, a redhaired and bearded devil with a brogue that could cut bone.

Damn, that man can act even without his leonine purr.

Oh, yeah, Saunders' in THE BLACK SWAN, with a redhead more flaming than Miss Maureen....

Ladybug said...
This comment has been removed by the author.
12:57 PM

Mmmm... I'm watching The Adventures of Don Juan in glorious colour, and I must say Flynn is looking a tad bored. Did he, like Tyrone Power, want more of a challenge?

Have a safe trip, Siren - woulda sent this missive sooner, but was stuck sans computer in another town. Like the cabin shot banner, it reminds me of the Queen Mary staterooms.