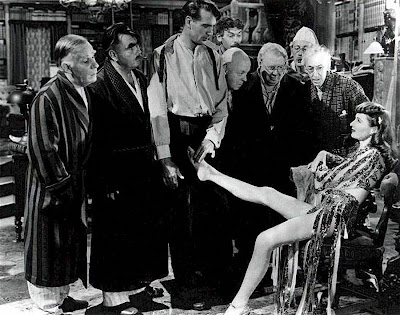 The Siren was quite gratified by the number of requests she received. She ran into a few little problems, such as the tendency of some treasured commenters to respond with lists, which forced her to go all CEO and select just one request per person for the hat. Duplicates were given separate slips under each name. So after placing 84 small pieces of paper in a straw hat, because the velvet was too shallow, and having the Siren's longsuffering husband draw out four, the results are as follows:

Village of the Damned - Laura, Who Can Turn the World Off With Her Smile

The Siren would like to assure those of an unduly suspicious nature that she had a large number of requests for George Sanders movies, and therefore the fact that one-half of the selections do, in fact, star Sanders is quite simply not her fault. She won’t claim it made her unhappy, however. The Siren will be writing these up in the order in which she gets her hands on them.

Meanwhile, she wishes all her patient readers the very happiest of Thanksgivings.
Posted by The Siren at 10:35 PM

Happy Thanksgiving! I'll be looking forward to your posts. :)

And a Happy Thanksgiving to you and yours.

I can't wait for your post on The Saint's Double Trouble. It's the next Saint film for me to see (if I continue to actually watch them in chronological order as I have been doing).

Also looking forward to reading about Ball of Fire before I see it. It's on Hulu, so I have no excuses for not seeing it anymore.

A Happy Thanksgiving to The Siren too!

Yay, Sanders for the win! Uh-oh, now that my name's in your post, I guess I should actually start writing in my blog so people won't go "broo?" when they see it's empty. My tendency to start projects with wild abandon and then drop them in the same manner has finally caught up with me.

Can't wait to see each review!

Dear Siren,
May you have a wonderful Thanksgiving holiday as well. I'm most looking forward to your post on "Ball of Fire", a film which I recently rented from Netflix when I discovered it is the original film that "A Song is Born" was based on.

I've mixed feelings about my preference between the two (yes, I'm one of those who constantly compares films to see how they measure up to each other rather than simply going Zen and taking each on it's own unique merits). I prefer the musical research of "Song" over the lexicographical research of "Ball". But I'm putty in the hands of Barbara Stanwyck, in a way that Virginia Mayo doesn't quite measure up to. Gary Cooper also beats our Danny Kaye as the clueless scholar -- Kaye is the better comedian, but Cooper brings the right measure of unselfconscious innocence to the role that lets me believe in what I'm seeing, that takes it from simple comedy to melodramady, if I may use a word that I don't recall seeing or hearing before, but describes a comedy that makes me ache for the feelings of the protagonist. I empathize with Cooper in a way that I just can’t with Kaye – there’s a subtle self-consciousness in Kaye’s performance that puts up a slight barrier to my acceptance of him as a real human being.
Bottom line, I love both films, but I love "Ball" more, even though it doesn’t have Satchmo, the presence of whom kicks up "Song" at least three notches. God, I love that man and his music!
All best,
Mark Lancaster

Happy Thanksgiving, Farran of le Sirenuse, and I'm looking for'ard to your musings on the excellent selections, especially the ones with Tom Conway's brother.

I'm so glad Ball of Fire made it in! I picked up an earlier DVD copy of it about 8 or so years ago with no idea of what I would see. I probably picked it up because Howard Hawks directed it. I loved it.

One scene I marveled at was Gene Krupa's matchsticks drum solo. Pardon the phrase, but that was SO cool. I'm looking forward to what you have to write about the movie.

ball of fire is one of my absolute favorites so I'm very excited to hear your take on it. Happy Thanksgiving!

Happy Thanksgiving to you and yours Siren, and to all my American friends here...

Forgive us all, Trish, for missing your festivities. A belated Happy Canadian Thanksgiving!

The Saint's Double Trouble. Oh, dear, what have I wrought? Don’t ‘spect too much, folks, it’s just a programmer, but it does have two Georges for the price of one. And there those are among us (I’m one) who would pay good money to watch G.S. read the phone book.

Someone said the other day that. they. didn’t. get. George. Sanders.

(I used to be like that. But after following the only piece of advice my grandmother ever gave me: If you want to be smart, hang out with smarter people)…
now. I. do.
and. Doug. Sirk. too.

Oh, indeed, A Happy Thanksgiving to all the Siren-eastes!

Although I'm sad to see Laird Cregar didn't make the cut, I can't be disappointed with The Saint's Double Trouble, which I found quite puzzling in some respects...

…the delightful thing about the movie is that George makes absolutely no effort to differentiate between the two characters, he plays them identically (he barely changes his hat), and it’s a joy to watch his casual arrogance […] It’s perverse I know, but George is always at his best for me when he’s clearly phoning it in.

Re Dick van Dyke’s cockney accent. Oh, you’re right, it’s bad. Really, really bad, but nowhere near Bette Davis’s attempt in Of Human Bondage and as the gods know the only thing in film history worse than that was Kim Novak in the remake.

I did see it, Yojimboen, and couldn’t agree more. If Sanders had worked up a characterization for this thing it would have drained all the fun out of it. Phoning it in successfully is an art. Tough to pull off and impossible to teach, I imagine. Who today can do it? (Maybe Robert Downey Jr.?)

(I don’t mean phoning it in like, say, Bruce Dern in The Incredible Two-Headed Transplant, of which he said (I paraphrase) ‘If I appear distracted in the scenes we shot on Friday morning, it’s because I was 85% sure my check was going to bounce if I didn’t get to the bank before the caterer.’ Although there's something to be said for that, too).

Yay! I actually just watched that Saint movie the other day, so I'm looking forward to your review. The thing about GS, is that with movies that were made from books, you can never not associate that book character with GS's movie version. Right now I'm working my way through the 'best of' Saint books, and sure enough, it's GS's voice in my head. Same with The Midwich Cuckoos and The Portrait of Dorian Gray. And I agree with everyone else - GS acting by the numbers is still worth a lot more than some people Method acting their pants off.

Oh my! Knowing that you'll be doing Ball of Fire utterly reconciles me to not having my request chosen. Of course, I'll be happy no matter what you write about; that's a given. But I do love me some Ball of Fire. Oh, I do.

It's as red as the Daily Worker, and twice as sore!

I can help but think you'd find more to write about in Performance and Cutter's Way than The Saint's Double Trouble and Hammer's Hound of the Baskervilles, but, hey, that's just me.

I'd like to see the Siren take on "Performance" sometime.

For the sake of general contentment I'll cheerfully cede my suggestion to whatever is drawn next from the Italian Straw Hat.
I'm just sayin'.:-)

Merry(ie?) Clayton: now you're talkin.' If my trivia/gossip's correct, she had a miscarriage when she hit that high note in "Gimmie Shelter," the one that makes Jagger go "whoa!"

Merry Clayton has a couple of movie and TV credits too, most notably on the TV show "Cagney and Lacey."

By chance tonight I came across a site that has isolated the vocal and other tracks for "Gimme Shelter." If you want to hear Ms Clayton wail for heaven alone, now you can
http://www.dangerousminds.net/comments/deconstructing_gimme_shelter_listen/