Being a conceit blatantly stolen from Glenn Kenny, whom the Siren hopes won't mind. 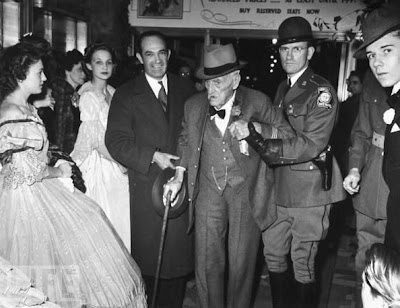 'I was in that preemy they had in Atlanta,' he would tell visitors sitting on his front porch. 'Surrounded by beautiful guls. It wasn't a thing local about it. It was nothing local about it. Listen here. It was a nashnul event and they had me in it--up onto the stage. There was no bobtails at it. Every person at it had paid ten dollars to get in and had to wear his tuxseeder. I was in this uniform. A beautiful gul presented me with it that afternoon in a hotel room...'

'This was a Hollywood, California, gul,' he'd continue. 'She was from Hollywood, California, and didn't have any part in the pitcher. Out there they have so many beautiful guls that they don't need that they call them a extra and they don't use them for nothing but presenting people with things and having their pitchers taken. They took my pitcher with her. No, it was two of them. One on either side and me in the middle with my arms around each of them's waist and their waist ain't any bigger than a half a dollar.'

--from "A Late Encounter with the Enemy," in A Good Man Is Hard to Find, by Flannery O'Connor.
Posted by The Siren at 4:55 PM

Good ol' Flannery - she could hit the nail on the head with both eyes shut. Was Girl 27 there, I wonder?

I have no idea why, but I've had Flannery on the brain for a while now. Love her.

I love her stuff. Picked up a collection of her stories in the Big Easy a few months ago. No one quite like her.

The photos of Flannery O'Connor bear a surprising resemblance to the Joan Fontaine still of your profile photo. She's one of the great masters of American literature, never did forget reading ''A Good Man is Hard to Find'' and still haven't figured out what to make of ''Wise Blood''. It's amazing that she spent most of her life as a solitaire and never travelled regularly, yet her imagination is vast enough to cover the whole of the 20th Century.

More on Flannery O'Connor and motion pictures, from THE HABIT OF BEING, her selected letters:

… I have just sold the television rights to "The Life You Save May Be Your Own" to what I understand is called the General Electric Playhouse. All I know about television is hearsay but somebody told me that this was a production conducted by Ronald Regan (?). I don't know if this means RR will be Mr. Shiftlet or not. A staggering thought. Mr. Shiftlet and the idiot daughter will no doubt go off in a Chrysler and live happily ever after. …

… I have just learned via one of those gossip columns that the story I sold for a TV play is going to be put on in the spring and that a tap-dancer by the name of Gene Kelly is going to make his tellyvision debut in it. …

… I am writing my agent to make haste and sell all my stories for musical comedies. There ought to be enough tap dancers around to take care of them, and there's always Elvis Presley.

… A letter from my agent today announces that "The Life You Save" will be presented February 1 on the Schlitz Playhouse … My eager beaver friend in NY keeps sending me clippings of gossip columns, one announcing that Kelly will star in Flannery O'Connor's "backwoods love story." Another saying Kelly says "It's kind of a hillbilly thing in which I play a guy who befriends a deaf-mute girl in the hills of Kentucky. …" … my NY friend … thinks this is all hilariously funny and keeps writing me, "Has dignity no value for you?" etc. … All my kinfolks are going to think that it is a great improvement over the original story.

1. Can anyone view and review this production (Paley Center, perhaps?)? After seeing him in CHRISTMAS HOLIDAY, I think Kelly would be a damn fine Mr. Shiftlet.
2. Who else passionately longs to see an O'Connor script for Presley?
3. Or would Jerry Lee Lewis be the ideal match?

An even more farfetched opportunity to urgently recommend William Trevor's beautiful story "Nights at the Alexandra" about a man who builds a movie theater in the boondocks of Ireland as an act of love for his wife. (The story takes place in the 1940s and the first film shown is Rebecca.) Trevor's work is full of film references.

May I take a short moment to bow deeply in the general direction of everyone in this thread? God you guys enrich my life. I throw up something apropos of absolutely sweet FA, and I return to these riches. And y'all just don't know the week I am having (and it's Tuesday). So virtual air-kisses to all.

Arthur, I had never troubled to look at FOC photos before, but dang if you aren't on to something in the young pictures. Never realized she was pretty; don't know why, but always imagined her as a plain sort.

La Faustin, that comment is so great it deserves its own post. She was hilarious, wasn't she? The stories are so grim and yet so funny. I can't remember, but I am quite quite sure someone here does, which story has the conversation about the woman who just got pregnant despite being in an iron lung. And whoever is talking remarks, "I don't know, if I was in an iron lung there's some things I just wouldn't do." Kim Morgan has a great post up on Elvis, as it was his brithday this week. I'll have to point this out to her. I totally think he could have done it but the Colonel wouldn't have gotten any part of O'Connor, I think.

David E., completely agree on the underseen Wise Blood. Huston had just the right twisted sensibility for that book.

XT, I am in complete agreement on the marvelous William Trevor, and I remember that story very well. He's quite like O'Connor in his pitch-black humor married to some very, very dark storylines. I once attended a reading by him with a fellow fan; the book just out was Felicia's Journey. We got to the head of the signing line and my brilliantly smart friend lost her head a bit and sang out in this very cheery Southern voice, "Oh Mr. Trevor, I just found your book so enjoyable!" And he looked at her with this completely flummoxed expression and said "Enjoyable? Really?" And she blushed furiously and backtracked to say she just enjoyed its brilliance etc., and meanwhile the Siren is dying from surpressed mirth. It was probably the only time anyone told him that book was enjoyable.

Around that time I was also in a book club that read one of his collections and the leader opened the meeting with, "So. William Trevor. How do we think this guy talks himself into getting up in the morning?"

Anyway, I adore him. And in a weird way he IS enjoyable.

Well Joan Fontaine in SUSPICION is supposed to be a "plain" sort. I read Flannery O'Connery's works in the Library of Congress Editions at the local American Center Library and they have small portraits of each entrant on the cover of their regal black jackets, and I have a memory for faces especially if I like the author's work and she looked very young for a major writer and those glasses emphasized it.

Carson McCullers(whose Reflections on a Golden Eye was adapted by Huston and whose Ballad of the Sad Cafe has some correspondences with O'Connery) for instance looked much older in her LoC edition.

Flannery O'Connor's favourite writers included Nikolai Gogol, Nathanael West(naturellment) and of course William Faulkner and the strange humour you get in her works is found there too.

The main difference between Huston's adaptation of Wise Blood and Connery's book, despite being true to the source, stems from the fact that Huston was a non-believer and Connery was a devout Catholic. The final scenes of the film for instance are more ambivalent then the last lines of the story.

Siren, I am green and orange with envy; imagine being in the PRESENCE of William Trevor! And what a great story! I just finished Reading Turgenev and am still levitating. Now this book would really make the perfect Yojimboen triple threat: A great role for the young JOAN FONTAINE, playing a TORMENTED WIFE, for which she could PUT ON AN IRISH ACCENT.
Trevor's alchemy of turning the bleak into the beautiful and the horrific into the hilarious does indeed have parallels with O'Connor (well, she is Irish, after all).

gmoke said...
This comment has been removed by the author.
7:55 PM

Went looking for a picture of Flannery O'Connor and came across Gene Kelly in the role mentioned as well:

THE LIFE YOU SAVE 1957
Gene starred with Agnes Moorhead and Janice Rule, in this 30 minute Schlitz Playhouse Of The Stars production. It was based on a story by American Catholic writer Flannery O'Connor. You can read it by following this link: http://faculty.smu.edu/nschwart/2312/lifeyousave.htm

They changed a few details for the screen. 'Mr Shiftlet' becomes Tom Triplet, Gene's character, a hobo with one arm and a toolbox! They have the TV play advertised for sale in VHS format on www.moviesunlimited.com and on TCM.

I should add, XT, the FO’C collection has always sat cheek-by-jowl with that of J.D Salinger. So there.

I usually have at least 4 or 5 five books in my car at all times, and for a long time a Flannery was there - the whole thing fell apart one day from the sunlight and my reading it over and over. That's partially why I picked up another.

gmoke -- wow, thanks! This must be looked into!

Yojimboen, I get the feeling FO'C herself had second thoughts about that title:

I have been getting some very funny fan mail – a lot of it from gentlemen who have got no farther than the title – "Do you really think a good man is hard to find? I am 31 years old, single, work like a dog …" etc. etc. etc.

… The last thing Mrs. Hall sent me to review [for the diocesan bulletin book page] was Msgr. Guardini's book on the Rosary. I asked her please to quit putting that "author of A Good Man Is Hard to Find" business after my name. Holy Mother!

Siren, thank you for inspiring us, as always. I hope the week is looking up.