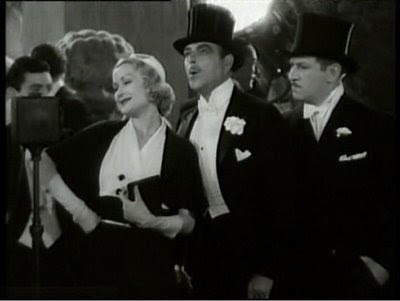 For the latest edition of Nomad Widescreen, the Siren participated in a year-end symposium with a number of distinguished contributors. Her 2010 musings can be accessed here, and her hopes for 2011 here, at least at the moment. Nomad continues to fiddle with links, so let the Siren know if these two suddenly decouple from the rest of the train.

Over at Sergio Leone and the Infield Fly Rule, the ever-lovable Dennis Cozzalio plays host to another group of highly worthwhile film brains, including the fabulous Sheila O’Malley, who does the Siren the honor of quoting her and goes on to make our kind of year-end list, here.

Finally, Comrade Lou Lumenick does the Siren’s heart good with a trip back to Russia and our Shadows series for TCM.

The new banner is a woman with whom the Siren shares a birthday, January 17th: gorgeous Francoise Hardy, chanteuse, sometime actress and astrologer. (Tell me, Mlle. Hardy, are we still Capricorns?) The still is from Grand Prix, one of those star-laden behemoths that were everywhere in the 1960s. The movie has a number of fans, although the Siren can’t say she’s one of them, despite the movie's good looks and awesome racing sequences via director John Frankenheimer. But Hardy was, and remains, worth the journey.

Enjoy the holiday! The Siren will return shortly.
Posted by The Siren at 7:30 AM

All this to say, Happy Birthday. From someone who refuses to change their sign.

One of my favorite Pauline Kael lines was from her review of Grand Prix where she noted that Francoise Hardy "seems to have wandered in from another movie that was more fun."

In Is It Really So Strange? , Bill Jones' marvelous documentary about Southern California Morrissey fans (chiefly Latino), there's an interview with one of them who while working as a record store clerk ran into Moz himself.

He was looking for Francoise Hardy CDs.

The first race in Monte Carlo in Grand Prix is amazing, and then watching it all the way through to the end, I realized it was a film I saw on TV when I was maybe five because I remembered the crazy crash at the end.

Best wishes for a very happy birthday and a wonderful year,

All I know is, my kids will be so excited that Batman showed up to wish me a happy birthday! Thank you. :)

David, that's hilarious and so true.

VP, Pinko and Laura, thank you so very much!

Way to create turmoil in a fellow’s callow chest:
1) I am delighted to wish you many happy returns but 2) not so much about being slapped upside the haid with memories my echt 60s fantasy girl FH. Yeah, I’m gonna get a lot of work done today.

"Grand Prix" is for the damn cars, period. All other moving figures are sticks and shadows. FH being the most visible of those, tho. It is however, the ultimate in-camera racing film. Like "Le Mans", the other, but boring, pseudo-verisimilitude racing film, these things are rumored to have people in them, but you could fool me. Barbara Hutton's boy, Lance Reventlow, a racer and constructor himself, had nothing good to say about racing films - they missed the irreverence that was a prime ingredient of living life on the edge like that. This is from a man who named his cars "Scarabs", not because it was egypto-mystical sounding, but because everyone else had cool car names like "Cobra", and "Cheetah", and "Tiger", and Reventlow figured it was a subtle joke to name his creations after a shit beetle. Go figure.

Happy birthday, Siren, from a Picses who shares a birthday with William Jennings Bryan (not in Grand Prix).

Happy Birthday and, as an old acquaintance used to say, "my moon's in jello" whatever my sign.

Just wanted to let you know that one of the films you wished for is available on dvd. John M. Stahl's "When Tomorrow Comes" is included as an extra on the second disc of the French release of Douglas Sirk's "Interlude", which has both been released as a single double disc and also as part of the second Sirk-box-set, which Glenn Kenny reviewed back in January 2009.

Happy belated birthday(it will be I think when you read this, if not happy actual birthday).

Like you, I really don't see too many contemporary films and apropos of your anticipating the next Woody Allen film, let me say that his most recent film, the one that's actually considered in some quarters "his worst ever" was one of my favourite movie experiences of 2010 as was SHUTTER ISLAND and CERTIFIED COPY. The best was hands down seeing Mizoguchi's ZANGIKU MONOGATARI.

2011 will include new Scorsese, new Spielberg(2 of them, after a very long hiatus), the expected yearly Allen, Eastwood and Oliveira film, and Malick's fifth feature.

Glad I could be of service, Ma'am.

I love Grand Prix, I guess because my dad and stepdad both built great race cars.

Racing is dull, though. My first race was at Limerock in the pouring rain. I was 11, and I had this weird, rubbery raincoat that somebody bought me at the last minute.

Best race ever: Unmodified stock cars at Summit Point. It was what I imagine rush hour in Italy to be, but without frightening the children and horses.

It always amazes me that no matter how many interpretations of Batman are out there, everyone goes to the 60's TV version first....

No worries, Batman. My favourite era is Neal Adams. Though I can tap out the tune, I have always hated the 60s tv show.

I'm exactly the same way, Trish. We should hang, and talk about that ;) It's all good...

One name: Black Canary. I'm with Trish, Adams was the high point of so many comics, and before the wackiness that has set in.

Batman REALLY begins with Mary Roberts Rinehart's. The first movie version was a silent, the second The Bat Whispers was a sound spectacular shot in 70mm. Both were directed by Roland West -- Thelma Todd's alleged murderer. Who killed her and why remains one of Hollywood's most enduring mysteries. The Bat Whispers is a masterpiece. I saw it on the big screen at the Acamdey theater several years back and it was a revelation -- replete with effects and scale-model work so sophisticated as to make Spielberg look like a teenage hobbyist.

Technically, West shot the film three times. The sound version was, like Oklahoma!, shot twice, with the scenes photographed alternatively in 35mm and 65mm.

Watching both versions side by side is a little like watching both Oklahoma!s, the scenes are almost identical, but not quite.

The 1959 Vincent Price version is also not too shabby, with the peerless Agnes Moorhead deservedly getting top billing.

Thanks for the Francoise Hardy still on the banner! 'Grand Prix' is pretty tedious but worth it just for Ms. H --- too bad she couldn't have been fit into 'Blow-Up', her and David Hemmings both looked great in white Levis in 1966.

Spielberg will always be a teenage hobbyist.

Grand Prix and LeMans happen to be the 2 best racing films made IMOH.

Interesting fact: Steve McQueen, neighbor at the time to James Garner, was so incensed at losing the part to Garner that he made LeMans a few years later.

Grand Prix could never be made today as the production crew followed the actual GP cars alongthe various circuits and you see the actual cars on the track in certain shots - really neat to see the actual champions of the day, like Jimmy Clarke, in the movie.

Frankenheimer was a Gearhead too BTW - and a Mercedes-Benz aficionado. Watch his movie Ronin with the various chase scenes.


I would say one has to be a Gearhead to like both of the movies. As little as I know The Siren, I would venture to say that she is not in this category.

On the astrological front, I am a Virgo. We are supposed to be neat and fastidious.

Come to my house sometime.

Maybe Mars was on the cusp of something.

My Nico slaute is up at Dennis Cooper's

Belated Happy Birthday Siren! Hopefully you're like me and turn your celebration into a week long festival. From a 3//3 Pisces like Jean Harlow.

Allow me to politely disagree Wm. I am not a "gear head" (I don't even own a car) but love Ronin.

Gran Prix I nibble for gorgeous people watching and fashions of the day w/ sound off (dislike rumbling engines and the whooshing of the cars racing).

Actually, my favorite H'Wood racing footage is the short, rather elaborately limned frontispiece from the very start of "Chitty Chitty Bang Bang", that recreates the frenetic, pre-Great War days of early racing wonderfully. Marvelous work, full of great costumes, too.

That is a great sequence. Pray that the fine folks at Disney don't decide to remake this classic. See also, footage used during The Love Bug. Great stuff....

Paulette - as a late English friend said to me upon disagreeing with him over a subject, "It don't make you bad!"

I had to laugh at the Siren's comment on Francois Hardy - I re watched the segment and it does seem like she'd rather be somewhere else but on the set ;-)

Since movies are for the most part purely subjective there is no right or wrong, and you make some valid points about Grand Prix. There is a lot (to me) superfluous romance in the film - something LeMans doesn't have.

One could consider LeMans to be a documentary over a drama. You see racing from the inside prospective - the mechanics, owner, team manager and drivers.

On Ronin - the fellow who drove that Audi A8 in the stunts was an F1 driver - and the Mercedes used in the chase along Nice's roads was the mighty 450SEL 6.9 - one of Frankenheimer's favorite cars (which I believe he had one in his personal collection).

If you aren't a gear head you probably haven't heard of the cult 10 minute film Rendezvous - it shows a car driving at insane speeds - through red lights - in the early Paris morning.

With the sound effects everyone for years thought it was a Ferrari but it was revealed by the filmmaker decades later to be a 6.9 - quite a film going 100+ mph through the Paris streets...