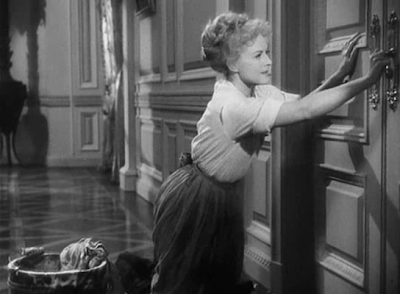 Two films on TCM this month demand that you record them or, if you aren't equipped to do that, that you find someone with a DVR who is willing to take bribes.

The Siren's sole viewing of the 1946 Diary of a Chambermaid, directed by Jean Renoir, happened years ago via a VHS tape that was in crappy shape even by the crappy standards of VHS rentals at the time. For the life of her the Siren does not understand why this movie is so elusive these days. When she saw it, the Siren thought it was the best of Renoir's American films and, she hastens to tell you, she likes the others plenty. Anyway, TCM is screening it at 1:30 am EST on the morning of Jan. 18, so the Siren will have an opportunity to see if she still feels the same way. 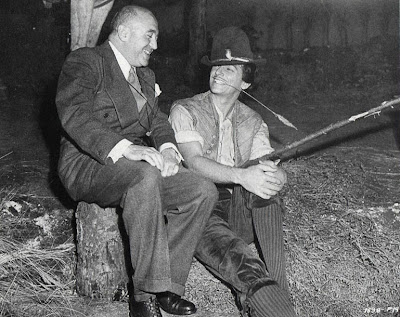 The second film comes as part of a complete "Max Ophuls in America" night on Jan. 23, and kudos to the good souls at TCM for programming this one. The evening begins at 8 pm EST with The Reckless Moment and continues via Caught and Letter from an Unknown Woman, which the Siren won't ramble on about here at the moment, although she may later. But for the Siren, the real rarity is The Exile (1947) at 1 am EST on the morning of Jan. 24. She missed that one at the BAM retrospective a while back and she plans to pounce now. The Exile is, of the four, the most ridiculously hard to see at the moment and to the Siren's knowledge this will mark its TCM debut.

Also noted: Monday Jan. 30 is Joan Fontaine night--five movies, including Born to Be Bad and The Constant Nymph. We addicts have possibly seen all these but, still--Joan!


(The top still comes from the site Notes on Cinema, which has an interesting screen-cap essay about the use of doors in Diary of a Chambermaid.)
Posted by The Siren at 8:42 AM

Too bad we can't time travel to the night I saw The Exile with Doug, Jr. in the house. I got to meet him briefly.

And if you will allow me to be a bit premature, Happy Birthday (tomorrow).

Can I show my philistinism here? Can someone explain what I should look for in an Ophuls film and his general wonderfulness?

I've tried with a few of his films, and I just haven't gotten him thus far, so I'd appreciate a primer in what to watch for. Maybe this time I'll understand.

Man, I'm really upset I don't have cable. Diary of a Chambermaid has been on my list for quite some time. I usually try to avoid seeing what's playing on TCM because I know it'll just bum me out that I can't watch it. Oh well.

If you are recording Diary of a Chambermaid via DVR to watch later, be aware that the TCM schedule lists this movie as a 98 minute long movie in a 90 minute slot...I am adding a half hour at the end just to be on the safe side. I have been burned by overly-optimistic scheduling ton TCM before!

I saw Dairy way back in the early '90s, and didn't like it much then--thought it too silly and slapdash. So this in your opine is better than The Southerner? I must see it again, then.

What's with Ophuls? An understanding and evocation of the upper class too piercing and levelheaded to have come from their ranks; an evocation of the fragility and pathos of beauty and of beautiful women that as yet has been unsurpassed; and a camera eye second to none.

Nice, Noel. Your next task is to name one current film director who comes close.

Re Renoir's 1946 Diary of a Chambermaid; sounds like TCM is mis-advertising; the longest version I've ever seen was the director's cut of 91 mins. The old VHS and the later DVD are both 86 mins.

I love Ophuls! Especially Letter from an Unknown Woman. Though The Reckless Moment and Madame de... aren't bad, and I just saw La ronde over Christmas :)

"Life for me is. . .movement" says an unmoving Lola Montes in Lola Montes. And so it was for her creator. Camera Movement is All with Ophuls. The shot for him is never a static entity but rather a launching platform into the beating heart of mise en scene.

Every Ophuls is worth serious and concerted attention, but I'd like to put in a particular word of The Recklesss Moment -- his last American film. Starrign Joan Bennett it's a tale of suburban anguish when a terribly nice middle-class woman disocvers that her daughter (Geraldine Brooks) is ahving an affair with an older man -- a nightclub owner with shady connections. He's tryign to put the screws on the daughter (in every sense of the term) and dropping by their lakefront home one everning he dies ina freak accident. Our heroine thinks her daughter has killed him and hides the body. It's at this point a gangster working for a combine to whom the decased owes moneyy shows up, played by James Mason in one of his most beautiful perfroamnces. He goes throiugh the motions of threatening her, and then falls in love with her.

The only other thing to say is that an important character, the lady's housekeeper, is played by Frances Willaims -- a marvelous African-American actress (and union organizer) who was a personalfriend of mine. Frances got on so swimmingly with Ophuls that he built up her part in a humber of subtle but telling ways.

One more thing: This film was remade a few eyars back as The Deep End with Tilda Swinton in the Joan Benntt part, Goran Visnic in the James mason role and a gay son instead of a straight daughter. There was no equivalent for Frances' part. Teriffic film nonetheless.

"I think I know the reason why

producers tend to make him cry

some stationary set-ups, and

a shot that does not call for tracks

is agony to poor dear Max

who, separated from his dolly

is wrapped in deepest melancholy

Once when they took away his crane

Dave, what Ophuls have you seen? Without knowing, it's hard to know if you just haven't caught his best, or if you're likely never to appreciate him...

Stylistically he's famed for his long moving shots, which sometimes do impossible things like tracking through walls, through time, or from one kind of reality to another. More of that in his last European films, but plenty of wild mobility in Hollywood.

Thematically, he's drawn to stories of suffering women in which social forces are in oppressive conflict against romantic passion.

So that's what to watch for -- along with the sensation of being visually dazzled and emotionally swept away.

The Exile has an alternative ending which really makes a difference, turning it into a proper Ophuls movie... sadly, this hardly ever screens, and it's not fair to describe it to anyone who hasn't first seen the producer's cut.

I didn't know about that alternative ending to The Exile. What's the differecne between them? The one I saw was bittersweet in tone.

That is a really nice picture, thanks for sharing.

Thanks for the Ophuls primer. I'm looking forward to watching them.

OT, but I think everybody here will enjoy the 'vintage' posters on the Movies from an Alternate Universe site, featuring things like James Dean and Eva Marie Saint in "Drive," and Ken Russell's "The Big Lebowski."

TCM viewers will be in for even more of a rare treat after the channel's broadcast premiere of THE EXILE: after the film ends, Robert Osborne will be back to introduce the film's alternate "European" ending, which the Library of Congress had in its vaults. The ending is only 90 seconds in length, but it adds a uniquely bittersweet & "Ophulsian" tone to the proceedings. So fire up your dvrs for the evening of Jan. 23rd!

OK -- who'll take a bribe to record THE CONSTANT NYMPH and THE EXILE? TCM is no more on my cable tier....

Gotta say the Buñuel version of Diary of a Chambermaid is much better than Renoir's. But then they were going for very different feelings.

"Your next task is to name one current film director who comes close."

Somehow when Ophuls is mentioned I keep thinking Mizoguchi. They seem to be kissing cousins for me, only wearing different costumes.

re Ophuls and Mizoguchi- in their stylistic decisions, they are kissing cousins, I agree with you. Long-takes and a certain reticence in resorting to close-ups. Even thematically: women in patriarchal societies.

But philosophically, there is a sense you get with Mizoguchi, that he thinks huumanity is irredemable. One class (the 1% mostly, of whom he shows the very worst) is destined to oppress another (chiefly women, children, slaves), which is doomed to suffer. He never seems to offer any kind of escape: his universe is full of unrelenting pain (oh, I had a lot of fun watching Sansho alright: the branding sequences, particularly, were a lark. My brother, whom I persuaded to watch the movie with me, refused to speak to me for a long time afterwards).

Ophuls is far more sympathetic to his heroines and even his villains (what David mentioned about Reckless Moment above). He would never ever portray suffering like Mizoguchi does (constantly). His movies are somehow - dare I say it? - easier to take. More relaxed.