This Happy Breed (1944), at the Criterion Collection 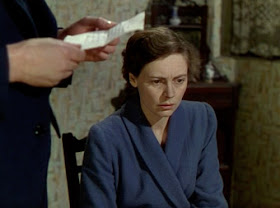 The Siren's essay, "Home Truths," about David Lean's film of the Noel Coward play This Happy Breed, is up now at the Criterion Collection. A brief excerpt is below. You can read the whole thing at the Criterion site; the Siren strongly encourages you to comment over there. And, should the spirit move you, please also click the "like" button at the bottom.

David Lean is a giant, and the Siren is still in (pleasant) shock that when she got a chance to write something for Criterion, it was about one of his movies. She's also developing a greatly expanded appreciation of the breadth and depth of Noel Coward. The piece is part of the booklet to the four-disc boxed set, David Lean Directs Noel Coward. Entirely aside from her participation the Siren tells you, in all honesty, that the set is a honey.

The film opens with the camera gliding across a panoramic view of London, followed by a dissolve to a street of houses. Then we pan again and descend toward the houses’ gardens, continue moving to an open second-story window, and finally dissolve inside to the bathroom. The camera moves past that filthy bathtub, down stairs so ramshackle you feel you can already hear them creak, and finally arrives at the front door just as Frank Gibbons does. This beginning, moving from the epic to the personal with exquisite precision, sets the film’s entire vocabulary. A large-scale interlude establishes the time period—whether it’s the strike or Neville Chamberlain’s return from Munich—then there’s a dissolve back to the Gibbonses, and as the family’s scene closes, Lean’s camera pulls away.