Manhattan Thoughts on a Hot Evening 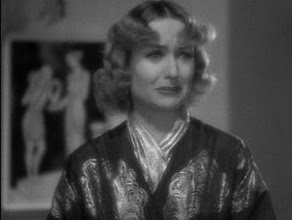 Tonight I stopped by the bank after work. I was all alone in the vast lobby, except for a long wall of ATMs and one young woman in a cheap but pretty dress. As I fed my card and got my cash I realized she'd stepped back from the machine and had started crying. By the time I left she was sobbing, but her back was to me, and the body language said to this longtime New Yorker, "Back off, I don't want comfort."

So all the way home, I wondered why a girl would turn away from the ATM screen and start crying.

If it were a silent movie, she would be crying because she had no money to feed her child at home, and the social worker is about to take him away. She's wondering if she must take the Easy Way and walk the streets.

If it were a pre-Code movie, she'd have told me little Timmy, her kid brother, needs an operation so he can walk again. I'd have withdrawn the maximum and left with her saying "God bless you!" As soon as I was out of sight she'd have walked out, hips swinging, and there'd be Warren William just around the corner, waiting for her. They'd get drunk celebrating at Slim Jim's Speakeasy and laugh at me.

If it's film noir, she's crying because Dan Duryea is going to kill her milksop husband unless she comes up with 10 grand by midnight. He's not much of a husband, but he's all she's got. She walks slowly down the street, smoking a cigarette and thinking of that mean old man across the airshaft, who keeps his money in his mattress, and has no one to miss him if he's gone.

If this were an early 1960s arthouse import, she would be weeping at the futility of man's existence in a postwar world without meaning. As she left the bank, the streetlights on 6th Avenue would cast no shadow.

If it were a 1970s New Hollywood piece, she'd be crying because she finally decided to divorce her uptight, undersexed, Establishment husband, and now he's cleaned out their joint bank account. She goes home and the nebbishy guy who lives downstairs offers to share his Chinese food. They eat it out of the takeout containers, as they sit on the floor of her now-empty apartment.

If this were Manhattan in the early 1990s, as I knew it, she'd be weeping because her dealer told her that her credit is no good.

But this is New York in 2013, and she was most likely weeping because Citibank has plenty of money, and she does not.
Posted by The Siren at 10:14 PM

Brilliant! I love the multiplicity of interpretation that ordinary events inspire! I love to do that kind of thing myself - but watch out for Duryea.

And if it were a 1980's capitalistic satire, she'd start weeping just as she finishes cashing a massive bonus cheque from a wall street firm which she has defended against a scrappy class action suit, mourning her lost law school values. Cue cynical synth score as she stalks out of the building and into the hot, windless night.

MAJOR love for this!!

You could play this one according to actress, too.

If it's Joan Fontaine, she's crying because she's about to give her last cent to a man that doesn't love her.

If it's Jean Harlow, she's crying because a rich, fat old gentleman is strolling by the ATM and she's about to make her play.

If it's Judy Garland, she's crying because she can't get any money and she's lost and alone in the city.

And if it's Carole Lombard, she'll probably run back and kick the damn machine.

Thanks so much, all of you! Aubyn is right, Carole Lombard always was a uniquely logical actress, which is why she's illustrating this.

This is a damn fine piece of writing

great stuff - although it occurs to me that if you were in a musical (from any period), she may have been crying because the score failed to kick in

This is a masterpiece, Siren. I especially love what you did with the 1970s.

Take it away Fosse!

If it were a Depression-era Capra movie, she would be crying because she is a widowed mother of two who has no money for food, and she lost her job at the grocer because she was late to work last week the day her 3-year-old son was sick and she tried to take him to the doctor, but had no money for medical care.

I would take the maximum out and offer it to her, but she would be too proud to take it, saying that she could not accept the charity of strangers. As I walk away, she starts to cross the street after me to accept my offer, and is struck by a speeding Rolls Royce whose passenger is the privileged but good-hearted son of the wealthiest banker in town. He steps out of the car and into the mud to check on her, brushes aside the protestations of his chauffeur, and instructs the driver to take her to the hospital. She tells him she cannot go, as she has hungry, sick children at home, and he has the driver go pick them up and bring them to the family mansion, where he and she fall in love. They live happily ever after, but not before he instructs the owner of the grocery, who owes the bank a huge mortgage, that he will lower the interest rate only if the grocer offers health care and generous medical leave to all employees.

Pish-tosh on every preceding comment! I’m very surprised at you, my dearheart, you didn’t do the one thing you should have done! Which is force yourself upon her – fuck NYC body language and the F train it rode in on! You should have found out what was wrong and how you – or any of us – could have helped her. Your punishment is to track her down and do just that! I’ll give her whatever money she needs within reason, no strings, and I’m certain I’m not alone here! Go, babe! Go write the only ending worth a light in this cockeyed caravan!

I love this post, and I seriously want to see someone make a movie out of this, with the same actors throughout, but perhaps with different directors for each scenario/period. Maybe Jennifer Lawrence as the woman? And Guy Maddin for the silent film scenario? After that, picking directors gets hard, though.

Lovely. Reminds me of Roger Ebert's piece on La Dolce Vita. He saw it every ten years, and every time, it was a different fim, not because the film had changed, but because he was a different person.

78704, the Capra version would only have worked if it was written by Robert Riskin. Capra was a lifelong Republican who disliked FDR and the New Deal. Riskin and his other writers were the ones who leavened his views into the Capra-corn that we all know and love.

This post should win a prize somewhere sometime. It's so utterly good.

Wonderful little story. Sometimes it's easy to forget - given that you're usually writing about something - that you can just pure-D, stomp-down, kick-ass, tear-the-roof-of-the-muthasucka write.

Thanks for reminding us.

I was with a friend last month, we were headed to lunch, and he stopped at the bank to find ... an NSF message for him on his bank's ATM machine. He did not cry, because that is not what men do.

(h/t to FDChief for bringing this post to my attention.)

A big round of applause! This post is one of the reasons why your blog is exceptional: excellent writing, erudition, humor, and even some romance.