Want to See Rediscovered Orson Welles Footage? You Can. Here's How 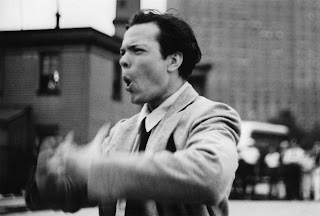 It is not, alas, the original cut of The Magnificent Ambersons, but it is pretty goshdarned magnificent all the same. As the great Dave Kehr writes in his must-read announcement at the New York Times, this is early Welles, made at age 23 just before Citizen Kane: about 40 minutes of footage that Welles intended to be shown before each act of a Gay Nineties farce called Too Much Johnson.

(Go on, get the giggles out of your system. The Siren will wait patiently. Welles, who had a wicked sense of humor, probably loved the idea of people like the Siren blushing every time they wrote out that ridiculously risque title.) 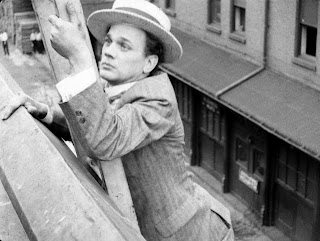 Now perhaps, like the Siren, you've been reading My Lunches with Orson and feeling sad about the projects he was never able to make. Undoubtedly you feel frustrated about the works like Don Quixote that are out of reach, snatched away from your eager cinephile grasp like a lunchroom bully appropriating your plastic baggy full of cookies. Eagerly you seize upon this news and say "When, o when can I view this? Dave Kehr says that the frames that are online already show evidence of Welles' genius, with 'strong, close-cropped compositions, powerful diagonals and insistent, ironic use of the “heroic angle”!' It stars Joseph Cotten, who also stars in my daydreams!"

Never fear, the National Film Preservation Foundation is here. They too want us all to see this, as they wanted us to see The White Shadow, where so many worked so hard to raise the funds to get that hitherto lost piece of Alfred Hitchcock's filmography online and available for viewing.

Click here for the NFPF site, where they are collecting funds to do the same for Too Much Johnson. Later this year, they want to put this early work, from one of the greatest artists this country ever produced, online for every Tom, Dick and Harriet to view.

It's being shown in October in Pordenone, Italy, as part of a festival called Le Giornate del Cinema Muto, but most of us are nowhere near there. If the local Octoplex were showing this, surely Sirenistas would happily fork over a tenner to see it. So look at this the same way. At the very least, give the NFPF the $10 ($14 in Manhattan) or so you'd have spent on a ticket. Contribute, and help them get this online. The Siren will thank you, everyone will thank you, and you will get a tangible reward: the ability to see an Orson Welles movie that's been hidden for decades.

Please, go, and give generously.


(The still of Joseph Cotten is from Too Much Johnson, and the top photo of breathtaking young Orson Welles was taken on set. More are viewable at the NFPF.)
Posted by The Siren at 8:00 PM

I was reading about this very film last week, strange. I thought of the NFPF when it was hinted in some articles it might make it online. My nickel's in the pot.

Will do! Thanks for the link.

There is a DVD available of some of the Welles Don Quixote released in 1991. I couldn't watch it all the way through. Interesting idea of transposing Sancho and the Knight of the Woeful Countenance to the modern world but this production is a total shambles.

I do, however, look forward to seeing his "earlier, funnier" work.

Maybe Netflix will do the right thing and stream this.

Just gave this, and the project, a plug:

Orson Welles is my favorite director. And not just because of his alleged eccentricities (he voiced Unicron in a Transformers cartoon). The man is a genius, always ahead of his time. It's good that a lot of his films are out right now, that even these obscurities find their way in the net. Score another for digital film preservation, I guess.

Thanks, Siren, for this post and for your ongoing efforts to remind people how important Welles is. I will definitely visit the NFPF web site to kick in some cash.

Gmoke, it sounds like you picked up Jesus Franco's reconstruction of Don Quixote, which Welles scholars have criticized for number reasons. Franco just took the footage he had access to and tried to string it together. Apparently it does not reflect Welles' intentions in any way.

Thanks so much for pitching in with this post!...People should know that other good things come out of the NFPF--most recently their wonderful American Treasures from the New Zealand Film Archive, including The White Shadow, John Ford's Upstream, the earliest surviving film directed by Mabel Normand, and much, much more, including many glorious extras.

Oh, you are all such loves. This is not a blogathon and I am not going to be repeatedly harassing people here; one post and that's it. But it's ORSON and when I heard from the NFPF, I had to put out the word, knowing that there are good souls here who will always give to a good film cause. Bless you all.

"Too Much Johnson" is one of the funniest titles around, for sure! My favorite Welles film is "Touch Of Evil." I saw the studio version and also saw a newer re-constitution based on Welles' extensive notes. My wish is for the guy who does the hilarious "English Patient" satire with plush toys (on YouTube) to do one of "Touch Of Evil." Using Welles' notes, of course.

The story of Welles' obituary for Jean Renoir:
http://www.salon.com/2013/08/10/the_last_piece_orson_welles_ever_wrote_partner/

For those of you who do film history research, some wonderful news -- the Media History Digital Project now has a search platform. Find out more at http://mediahistoryproject.org/2013/08/12/search-variety-arrive-at-the-media-history-digital-library/