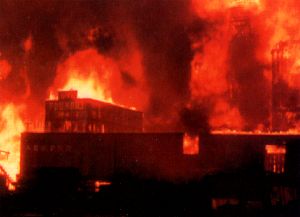 Atlanta does not burn in Gone with the Wind.

Atlanta burned in real life--AFTER Scarlett fled the city. Scarlett left about two and a half months before Sherman burned the place.

Listen to the dialogue. Rhett makes it clear that the city's depot area is in flames, burned by the Confederates who don't want Sherman to gain access to the munitions stored there.

Still don't believe me? Believe David O. Selznick. He was famous for his memos, and this one was a list of don'ts directed at the publicity team (quoted in Scarlett Fever by William Pratt and Herb Bridges). The capital letters and italics are Selznick's:

Most importantly, DON'T refer to the BURNING OF ATLANTA as such. The scene in the picture is not the burning of Atlanta but rather the burning of certain buildings containing war materials. The city in general was not touched by these fires!

Didn't they set light to the set of 'King Kong' for this?

Yes, they did! I am enough of a sentimentalist to wish they hadn't. Most of the old backlots are gone now, and it's a crying shame.