The Siren loves to discover a kindred spirit, especially in the person of an august critic who doesn't know she's alive.

"My familiarity with the film work of Kay Francis [is] intimate ... 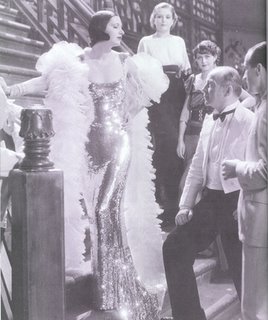 ...my appreciation for the screen choreography of Robert Alton unbounded..." 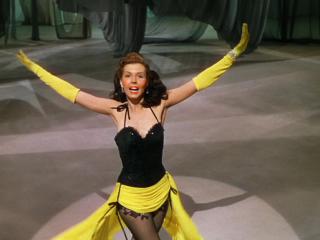 The gentleman's post mentions Francis & Alton only in passing, as he was settling a score with another site. All the same, bless James Wolcott's heart. Alton will be remembered as long as holidays bring scheduled screenings of White Christmas and Easter Parade (the still is from Ann Miller's dazzling "Shaking the Blues Away" number). But few recall Kay Francis, except for her role in the incomparable Trouble in Paradise. That's a shame.

Kay was gorgeous, looked amazing in evening gowns, gave some good performances on the rare occasions that she got a decent script, and had the most alluring lisp in film history, Bogart notwithstanding. She also seems to have been a laid-back, good-natured sort of star, as rare then as it is now. But how intimate is intimate? Did Mr. Wolcott make it all the way through The White Sister? No matter. If he ever blogs about the four-hanky chick flick supreme, One-Way Passage, the Siren swears she will send him a fan letter.
Posted by The Siren at 4:02 PM 18 comments:

The Marx Brothers Sum Up Christmas, Cheer Up Siren 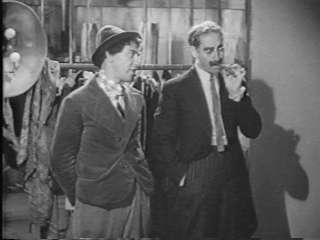 Fiorello: What does this say here? This thing here.

Otis P. Driftwood: Oh, that? Oh, that's the usual clause. That's in every contract. That just says uh, it says uh, "If any of the parties participating in this contract is shown not to be in their right mind, the entire agreement is automatically nullified."

Driftwood: It's all right, that's, that's in every contract. That's, that's what they call a "sanity clause." 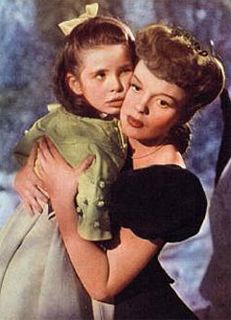 This still from Meet Me in St. Louis comes from the moments after "Have Yourself a Merry Little Christmas." Margaret O'Brien has just taken a shovel and gone after the snow family on the front lawn. This still has lousy color, for which I apologize. Judy's dress in the scene is red, and a gorgeous red at that.

So the Siren has had a grumpy week. Toddlers with cabin fever and a whacking huge snowstorm have combined to make her far from her usual soignée and carefree self. Over the horizon looms Christmas. Seen from nine days away, sometimes Christmas seems joyous and glittering, like the winter ball in Doctor Zhivago. At other times it seems that, like the Czar's soldiers amassing outside the Moscow mansions, Christmas is waiting for a chance to trample me.

Christmas at the movies is usually a jolly affair. Deck them halls and all that stuff, ho-ho-ho and misteltoe and presents to pretty girls. Even if a Christmas scene starts out sad, few filmmakers can resist the urge to make it uplifting at the end. The Siren has been trying to compile a list of movies that manage to show the dark side of Christmas. Here is what she has so far.

1. Citizen Kane. The boy Kane throws the sled, Rosebud, at Walter Thatcher, the guardian who has come to take him away. Maybe the scene takes place on Christmas, maybe it doesn't; the Siren always believed it took place a day or two after Christmas, and that Rosebud was young Kane's favorite present. The next scene shows Kane unwrapping a replacement sled, and obviously hating it. Flash forward to another Christmas--and Thatcher wishing the now-adult Kane "a happy New Year." The whole sequence is achingly sad, and builds sympathy for Kane by showing his loneliness and isolation. And at least a kernel of that feeling stays throughout the movie, even as Kane becomes less and less loveable. Like no other, this film nails how disappointing and hollow Christmas can be--yet another reason to admire Citizen Kane, if any of us needed one.

2. Stalingrad. The title may be description enough, but the scene the Siren has in mind is a moment of quiet in this bloody, chaotic movie. Having taken a gutted factory with fearful loss of life, a group of German soldiers takes a break from fighting. They huddle around the radio, listening to the Fuhrer's Christmas speech. Hearing Hitler address his nation in an ordinary, conversational tone is almost shocking. Usually when you hear recordings of the man, he is shrieking at the top of his lungs and working his audience into a frenzy. Here, the exhausted soldiers listen to the radio with expressions ranging from numbed apathy to bitter disbelief.

2. Meet Me in St. Louis. Every doggone Christmas-song-video-clip-anthology in creation shows the scene from this movie where Judy Garland, looking more beautiful than she ever had or ever would again, sings "Have Yourself a Merry Little Christmas" to a tearstained Margaret O'Brien. When it's sandwiched between Bing's duet with David Bowie and a clip of Bruce Springsteen singing "Santa Claus is Coming to Town," you can forget how depressing the scene is. And that is even after song was altered before filming to make it a little less misery-inducing. The original lyrics began, "Have yourself a merry little Christmas, it may be your last ..." Break out the eggnog.

At this point in the plot, the Smith family is about to leave their beloved Saint Louis for (horrors!) New York. O'Brien, playing the child Tootie, listens to Judy's song looking as though someone just killed her dog. In fact, Vincente Minnelli, at the behest of the child's mother, had just told her a story about her dog getting shot, bleeding, stumbling around and then dying in order to get a properly devastated expression. (In his autobiography he said he felt like a monster, but added by way of justification that he got the scene in one take.) Everyone talks about the pathos of Judy's singing, but do you remember how well it goes down with Tootie? The kid is so cheered up that she runs out and beheads all the family snowmen. Sure, then the father notices Tootie is having a nervous breakdown and decides to let the family stay in St. Louis, but the scene usually requires a stiff drink and a great deal of Kleenex for the Siren to make it through.

I'm leaving out It's a Wonderful Life because I am on Wonderful Life hiatus, in hopes I will one day be able to watch it without remembering all the stupid commercials it's spawned. Besides, I am not sure it counts. Certainly there is some dark stuff, in the "life without George" sequence, but it's all just an illusion. The real world, according to Frank Capra, is the one where everybody shows up at your house and showers you with money. No wonder the man's films remain so popular.

So, what scenes am I forgetting? There must be others. What other films try to bury Christmas with a stake of holly through its heart? Preference is given to films where the absent father/Santa Claus/milk train/transformed Scrooge does not show up to make it all better.
Posted by The Siren at 10:15 PM 8 comments: