The Siren apologizes for her overlong absence. She was editing a physics monograph for a relative. No, she is not kidding. Her brain hurts.

But it seems she has arrived back just in the nick of time, for a group of film bloggers, including Siren faves Flickhead, Girish and Peter, have banded together in an attempt to resurrect the reputation of Paul Verhoeven's Showgirls--or, failing that, at least to discuss it with a straight face. 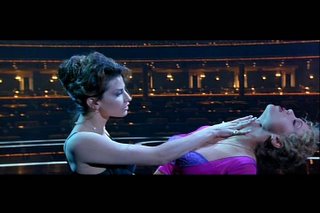 The Siren would never suggest that scenes such as the one above have muddied their usual sparkling thought processes. But she is still a bit worried. Hold the line while the Siren dabs her cyberfriends' foreheads with a lace handkerchief. Here, gentlemen, please borrow my marabou-trimmed fan for a moment. Pass it to Jacques Rivette when you are done. Breathe gently and evenly, and listen to the Siren.

The movie is a walking, pecking, flying, gobble-gobbling, ready-for-its-bourbon-bottle-closeup turkey. Sure, it has a certain '90s social relevance. So does "Veronica's Closet."

Douglas Sirk's movies smuggled a lot of subversive messages, but they were, even on the surface plot level, about serious subjects. Racism in Imitation of Life. The arrogance of the rich in Magnificent Obsession. Impotence, alcoholism and general family dysfunction in Written on the Wind. The petty constraints of bourgeois society in All That Heaven Allows.

What, exactly, is the serious subject matter of Showgirls? All that glitters is not gold? Except it is. There is no implicit critique of Vegas, the movie is celebrating--hell, wallowing--in it. Watch the camera linger lovingly on Nomi's every acquisition. See it sweep through the Haute Hick interiors as though doing an appraisal for tax purposes. And if the movie is anti-erotic, that is due to ineptitude, not deliberate distancing.

The acting is just atrocious. Elizabeth Berkley, moving her mouth as though the lip gloss is a surgical dressing she dare not disturb. Gina Gershon, sporting a "Texas" accent that even George Bush Sr. would deride as phony. Kyle MacLachlan, so obviously phoning it in he should have pinned his salary check to his shoulder.

Joe Eszterhas shopped the script around Hollywood for years, it was his pet. The Siren remembers the pre-release publicity for this movie, before everyone realized it would bomb. The lure was that it was made for adults, supposedly very frank and open about its eroticism. During filming the screenwriter went nuts if anyone tampered with the dialogue. So if, when Gershon tells Berkley, "I like nice tits," Berkley wanted to reply "I like possessing nice tits" instead of "I like having nice tits," that was verboten, because you don't want to rough up the meter when dealing with poetry like that.

And the rape scene also tells you that these guys were serious, that was there was no winking at the audience. This was an exploitation flick gone horribly wrong and way over-budget. It has some value as camp, but that's it.

Gentlemen, the Siren usually worships your taste, but de gustibus non est disputandum and all that sort of thing. She sincerely hopes you do not mind this energetic dissent.

And now she is signing off...to watch a Douglas Sirk movie.

Before she does, the Siren sets aside her smelling salts to give you an updated list of the many hardy (lost?) souls participating in International Showgirls Day, commemorating the 10th anniversary of the film's European release.

My personal two cents: Showgirls is operating in a vaguely Sirkian vein, but it's not Sirk, it's Verhoeven, who has his own (and admittedly simpler) sensibility and vision. Nor would I say it on the same level as a Sirk masterpiece. (Maybe, maybe, one of the "lesser," more ideologically compromised candy-color Sirks, like--IMO--Magnificent Obsession.) The fact that detractors and supporters of The Nomi Malone Extravaganza are engaging each other in debate is proof of this project's success.

Oh, and I meant to say, Showgirls differences aside, I enjoy your blog!

Prior to this I've only heard Showgirls championed as a so-bad-it's-good flick, not as a subversive under the radar genre critique, such as Starship Troopers has been called. I still haven't seen it, but I can't think of another film whhere I've read so many (uninentionally?) hilarious quotes posted out of context.

I'm not sure if the scene where James describes some of Nomi's statements as similar to those found on t-shirts qualifies as self-criticism. I do agree with you that what passes for dialogue in Showgirls is pretty lamentable.

Thanks very much, Zach. If you had told me two weeks ago I would be reading appraisals of this film that would make me wonder if there really was some sort of societal critique lurking in there, as opposed to the fervent desire to get as many nekkid sweaty broads on screen as possible, I would have eaten my copy of Lured, shrink wrap and all. And yet it has come to pass. I enjoyed reading your blog entry on this, as well. Poor Berkley, her career just swan-dived after this.

Surly & Peter: I just don't think there's any excuse for the screenplay, short of head trauma. Most of my fellow bloggers, including project instigator Girish, aren't arguing otherwise, even if they are planting big smoochy kisses on the flick. Rather, I think they're saying that there is somehow more in Showgirls than its creators meant to put there.

I also got the feeling, Peter, that if you weren't quite as hostile as the Siren, nonetheless you aren't quite ready to put this on a double bill with 42nd Street.

I'm thrilled that you participated in this -- I really enjoyed your take on it. Your Party Girl comparison over at Girish's is spot-on. I hadn't thought of that.

Always a great pleasure to see you here, Filmbrain. I am glad you see the Party Girl parallel as well.

To recap.
Points of comparison between Imitation Of Life and Showgirls:
1. Melodramas that also function as social satires, one of race & class, the other of ruthless ambition & the showbiz rags-to-riches American Dream.
2. Mise-en-scene: Emphasizes artifice, (unrealistically) rich color, deliberately eye-popping visuals.
3. Presence of key black characters, whose economic state is contrasted with that of much more successful whites (James becomes a grocery clerk at the end, his dancing dreams shot to pieces.)
4. Both have camp followings but look closer: reading the films as pure camp is highly problematic.
5. The Sirk has a Euripidean false happy ending (renuion at the funeral) but as Sirk himself has said: the automobile scene is a false moment of togetherness; every will go their own way and things will return to the way they used to be.
The Verhoeven ends (darkly) with Nomi having succeeded (false happy ending) using all means necessary and is now ready to repeat her story on a grander scale: Hollywood. Nothing has changed.
6. Both films with key characters who try to willfully forget their past by becoming strippers/showgirls.

Sorry, but that's a lot more than I see with Party Girl.

By the way, I'm by no means arguing that the Verhoeven is anywhere near as good as the Sirk. (I idolize Sirk too much for that.)
I'm just saying (as I did in my post) that the Verhoevenreminds me of the Sirk in several ways. I'm (1) making connections and (2) helping instigate reappraisal after the film's unjust dismissal, not trying to claim it for a masterpiece.
My point is: this is a rich and complicated film (both of these assertions have been borne out by the sheer verve and range of the blog posts), much richer than its creators might have imagined, I suspect.

And the Siren will never in a million years be able to guess what film she will get a gift of at lunch tomorrow. :-)

To the level of detail you cite -- yes, there's a greater amount shared with Sirk than with Party Girl.

However, for things less quantifiable, -- a feeling, a mood -- I think the Ray film has more in common with Showgirls than the Sirk.

Girsh/Camaspe -- As two people who are far better versed in 50s cinema than I, are either of you familiar with Martin Ritt's No Down Payment? I just posted my thoughts on it, but have yet to find anybody else who has seen it. Thoughts?

Filmbrain--I love the way you turn us on to obscure great films. I've discovered so many through you. No, I've never even heard of No Down Payment, but I really enjoyed your write-up about it.

Awesome. I love it when Filmbrain comes on the site to put things much better that I could. Yes, there is a certain cheesiness to Party Girl that resonates more with the feel of Showgirls. Imitation of Life is a tragedy in many respects; for all that some see camp in it, I know many, many women who cite it as an all-time tearjerker, and they aren't speaking ironically either.

But I do see your point, Girish, about the eye-popping color in both the Sirk and Verhoeven, and your points of comparison all work. I am resisting just because I love "Imitation" and think "Showgirls" is, as I said, a turkey, but perhaps not as huge a Thanksgiving centerpiece as I had thought (how's that for a grudging admission?) I should see it again, but I suspect I would rather see whatever it is you have for me *rubs hands greedily*.

Filmbrain, I have not seen the Ritt either but like Girish, I loved the review. I am still pondering whether to see "Munich" after you put it through the Cuisinart, as I am afraid that review may be more intelligent than the movie itself.

"And the Siren will never in a million years be able to guess what film she will get a gift of at lunch tomorrow. :-)"

Actually it was a cruel joke: Showgirls.
But the Siren was too classy and gracious to think that.
Which leaves me red-faced with shame for making that crack.
No, it won't be Showgirls but it'll be something I think you'll like.
Until then.

No Down Payment! At fourteen I saw it in a third-run theater with my buddy. We probably saw Tony Randall on the credits and went in; we came out realizing this was probably something we shouldn't have seen. We were pretty innocent in those 1957 days. I've never seen it anywhere since.

Exiled, it's nice to have you back! I feared Deanna had driven you away.