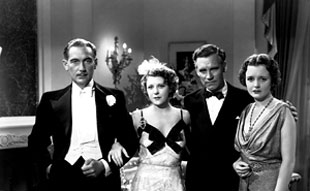 The Siren has no idea what took her so long to see Dodsworth (1936). The cinematography, by Rudolph Maté, is flawless, the sets are spectacular, the acting truthful, the script smart, William Wyler's direction ... honestly, there must be a flaw in here somewhere but it isn't coming to me at the moment. Perhaps Mary Astor's character, Edith Cortwright, a warm and beautiful widow, is a little too perfect. Otherwise, this adaptation of Sinclair Lewis's novel is a superb look at a marriage coming apart under the pressure of the wife's midlife crisis.

But the wife, in Ruth Chatterton's note-perfect performance, is shown with kindness. Fran Dodsworth's self-deception, her longing for the adventure she hasn't gotten in her long marriage to an auto tycoon, are understandable and deserve sympathy. That sympathy also testifies to the movie's greatness, because Fran is deceiving Walter Huston, who is playing surely the most lovable industrialist ever put on film. Huston had already been Dodsworth in a play version, but neither he nor the movie retain even a trace of staginess.

Sam Dodsworth's character is less easy to recognize than his wife's. In her extensive preblogging experience with business types, the Siren wishes she could tell you she met many who, after being reluctantly dragged abroad by an itchy wife, eagerly absorbed as much of the Continent's culture as possible. In fact, the Siren usually saw wealthy Americans treating Europe the same way Charles Foster Kane did--as a gigantic shopping mall. At the beginnning, Dodsworth doesn't seem to see Europe as much of anything at all, other than a means of making his wife happy. He's retired, she wants to see the world. Clearly his heart is still back in the Midwest, at the auto works he built from nothing. But early in the movie, as the Dodsworths make the transatlantic crossing, we see Sam tearing into one of the ship's dining rooms to tell his wife he can see the approach of a famous lighthouse on the English coast. He's so boyishly excited he barely notices that table mate David Niven, in Early Career Cad mode, is flirting like crazy with a willing Fran. Up they all go to the deck, and Dodsworth tries to interest his wife in the view. She says she's freezing and the damp air is ruining her hair. Dodsworth, hurt but still enthusiastic, lets his wife and her would-be paramour go below.

So from the beginning, you're shown how this trip will play out. Fran talks a good game about wanting the refinements of Europe. "Oh, you're hopeless. You haven't the mistiest notion of civilization," she snaps at her husband. Retorts Sam, "Yeah, well, maybe I don't think so much of it, though. Maybe clean hospitals, concrete highways, and no soldiers along the Canadian border come near my idea of civilization." Yet Dodsworth, not a man to putter around enthusing over cathedrals and graves, still will find much in his travels to fire his imagination. Fran will be sitting at a table in one fancy place after another, seeking reassurance from men far less worthwhile than her own husband. Your heart aches for them both--at least, at first.

Eventually you see Fran's restlessness degenerate into outright narcissism, despite her occasional better impulses, her husband's love and even a kind warning from Mary Astor, delivered when Chatterton coquettishly "admits" to being 35: "Don't." Meanwhile, Dodsworth is drawn to Astor's character, and who wouldn't be. The actress is photographed to show a classical beauty that seems to echo all the art of Europe. To Dodsworth, she comes to signify all the things another country could offer him. Astor, so memorable in shady roles, takes a potentially dull character and turns her into someone you want Dodsworth to fight for.

According to A. Scott Berg, who discusses the making of Dodsworth in his biography of its producer, Samuel Goldwyn, the depiction of Mrs. Dodsworth is due mostly to Wyler's efforts. He asked screenwriter Sidney Howard for rewrites to make the wife less selfish in the movie's early sections and to keep some sympathy for her even as things progressed. Otherwise, Wyler reasoned, the audience would despise Dodsworth for having stayed with such a harpy. Wyler fought constantly with Chatterton, who wanted to play the part as a straight-out bitch. The battles got so heated that according to David Niven, after one take too many Chatterton slapped Wyler across the face and retreated to her dressing room. Mary Astor, who seems to have been almost as insightful as Edith Cortwright, said Chatterton's character "was that of a woman is trying to hang onto her youth--which was exactly what Ruth herself was doing. It touched a nerve." No wonder the Siren found herself wincing at the harsh truth of some of Chatterton's scenes.

Despite its pedigree and glowing reviews, the movie barely earned back its costs, and then only after several revivals. ("Nobody saw it. In droves," claimed Goldwyn.) Chatterton wasn't nominated for an Oscar, though Maria Ouspenskaya was, for a micropart late in the film. All four-feet-whatever of Ouspenskaya sweeps into a hotel room to tell the deluded Fran that no, she won't be able to marry her much-younger lover. Luise Rainer is famous for winning an Oscar with one scene, but Ouspenskaya appears to have gone Rainer one better by getting a nomination for one perfectly delivered line: "Have you thought how little happiness there can be, for the old wife of a young husband?"

Goldwyn always believed the movie was a financial disappointment because "it didn't have attractive people in it." (Come again, Sam? how closely did he look at Mary Astor?) But its reputation has grown over the years. Let the prickly, hard-to-please Sinclair Lewis have the final word: "I do not see how a better motion picture could have been made from both the play and the novel."

(Quotations on the making of Dodsworth are taken from A. Scott Berg's brilliant Goldwyn.)
Posted by The Siren at 11:30 AM

I walked in on the tail end of Dodsworth many years back at someone's private screening. I liked it enough to buy it on tape, and now have it on DVD. I like Wyler's almost constant use of formal framing devices. It probably helped that cinematographer began his career with Dreyer.

Reading your review made me realize that I was far too young to appreciate this film when I first saw it. I've just upped it to the top of my Netflix queue.

Filmbrain, I think you're right. This is one movie that I am glad I didn't see in my 20s. Certainly a young person might like it, but you really need to have faced the reality of fading youth yourself to appreciate how well this movie deals with the subject.

Peter, I love the framing in Wyler's movies too. There is an almost literary quality to the way he presents a scene; that probably isn't the perfect adjective but I mean it as praise. There is always such precision to the composition. As soon as the camera looked in on Dodsworth, gazing down from his office on the factory he'd built, I knew I was watching a great one.

Do you think Dodsworth has more in common with James' Lambert Strether than with any real businessman?

I think Wyler may be the most underappreciated of all great directors, maybe many don't even see him as great. In discussion of directors, he certainly doesn't seem to be mentioned with the frequency of Ford, Welles, Hitchcock, and a few others. I read a bio of him, he was a good guy unless you were an actor. He was known for his endless takes and no hint to the actor of what he wanted, "just different" is the gist of what he would say. Your comments on Dodsworth certainly are in keeping with that.

Once again you add one to my growing list! Watch Wyler's atmospheric The Letter, where he seems to be filming a silent. It must be the only Bette Davis film that isn't strictly a vehicle for her. In fact Wyler's camera truly catches the dilemna of James Stephenson's lawyer, a man selling his soul for a mess of pottage.

Another one for my list as well. I'll hav to track it down. (Wyler does have quite an amazing list of movies to his credit.)

I've got a couple of older Wylers on my Netflix queue. If you haven't seen it yet, I recommend The Good Fairy, with a screenplay by Preston Sturges.

I love love love this movie. It came up a few times on Nick's Oscar threads, and I'm glad you have joined the love-in. And I'm so glad you liked dear Ruth. She's my favorite Oscar soapbox--Luise Rainer indeed.

Gentlemen, I am so glad we all love Wyler. Peter, I am putting Good Fairy on my to-see list right now. It sounds like a pip.

You write well about some compelling things about "Dodsworth" but you've made one important error, especially considering when the film was made: Edith Cortwright was a divorcee, not a widow. (Wikipedia staes otherwise but TCM backs up my recollection.)

That Edith is warm, caring, wise, and sane despite being divorced is a pretty significant statement. It also suggests a resonance of shared experience between her and Sam Dodsworth.

I love this film!

Greg, now you have me curious and I will have to go back and check the movie itself, which I can't do at the moment. I did flip back to Berg's "Goldwyn" and he also identifies Edith as a widow. You're right, it would be an important distinction especially the Breen Office frowned on any sort of positive portrayal of divorce. I suspect she's a divorcee in the book but honestly can't remember from the movie; whatever happened to him, her husband gets very little dialogue as I remember.

I don't really like this movie very much. Despite Wyler's efforts to portray Fran Dodsworth with a little more sympathy, she still got the short end of the stick.

And in the end, Dodsworth ended up with a younger and more beautiful woman to tend his house and warm his bed, while Fran ends up alone. As a woman, the movie left a bitter taste in my mouth.