Robert Altman Says It to Their Faces 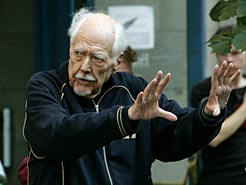 The Siren has spoken to several people who have worked behind the scenes with Robert Altman, and they all love him. They tell me he creates an almost familial atmosphere. They all have lunch together and Altman (get this) often bakes bread. He tells great stories. He's fun to be around. I love to think of people having a leisurely lunch with Robert Altman, then going back to the mixing and cutting rooms to turn out another movie reminding us that people are no damn good.

Tonight Hollywood awards Robert Altman an honorary Oscar. It's enough to get you all teary-eyed, this honoring of a likable man for a 45-year career of gleeful misanthropy. Especially when you consider The Player, a movie the Siren wholeheartedly loves. You didn't see the architects' association inviting Tom Wolfe to receive a gold watch for From Bauhaus to Our House. For all its many (many many many) faults, the Academy has got to be one of the few industry organizations that will reward a man for a career that includes a lengthy disquisition on what bums they all are.

Like any genre, films about filmmaking have conventions, one of them being that Hollywood is a cesspool. You can depict that in a funny way, as in Singin' in the Rain, or you can show it in a harsh way, as in Two Weeks in Another Town. Despite that incontrovertible rule, however, another genre convention is the saving grace--the benevolent executives (yeah, right) in Singin' and the Cukor A Star Is Born, the undoubted talent of Kirk Douglas's character in The Bad and the Beautiful.

Along comes Altman to jettison the rules, as he always does (and don't we love him for it). Not only are the executives creepy, the stars are creepy, the hangers-on are creepy and even the art-loving cinephiles are pretentious and creepy. (Thanks, Bob. We love you too.) Possibly the only character who seems entirely sympathetic is Malcolm McDowell, who shows up late in the film to tell Tim Robbins "If you've got something to say about me, say it to my face, not behind my back." (The actor probably ad-libbed the line or had it fed to him by Altman, as most of the stars with cameos in the movie did not have scripted dialogue.)

The Siren sees the occasional sneer at this movie's supposed stunt casting, a jaw-dropping parade of celebrity that dwarfs even Around in the World in 80 Days in quantity, if not quality. But the teeming People cover subjects add a giddy versimilitude, and underline another point about the film colony, namely its sheer cluelessness. Oh sure, they believe they're in on the joke. But do they realize just how dark that joke is? In some of the old Warner Brothers cartoons, Daffy Duck would tear around shrieking, "I know when I've been insulted!" Scene follows scathing scene in The Player--"I was just thinking what an interesting concept it is to eliminate the writer from the artistic process. If we could just get rid of these actors and directors, maybe we've got something here"--and you start to wonder if some of the talent milling around has the sense God gave a cartoon duck.

It isn't hard to look at this movie and think lunch with Altman would be an incredible treat. The Player is vicious, but hey, it's fun. There's the parlor-game aspect of spotting the references, there's the late Geraldine Peroni's flawless editing, there's the endless array of visual jokes (like the opening tracking shot that includes a discussion of tracking shots), there's the firecracker wit of the dialogue.

When Altman gets the inevitable, well-deserved standing ovation tonight, the Siren will be raising her glass in a toast--and wondering if somewhere in that theater, there really is a man who is planning to remake The Bicycle Thief.
Posted by The Siren at 11:33 AM

Re Daffy Duck: is there any comment about the helplessness of the film actor as sharp as "Duck amuck"? I believe that WB animation department were, under the innocent guise of cartoonist, were in fact the Voltaires of Tinseltown.

Off topic: by some coincidence an exhibition+film season about Erice and Kiarostami is taking place near me. Call it Serendipity.
(http://www.cccb.org/eng/activ/cine/cineact.htm)

Campaspe: Please don't make me wait so long for your next posting. I was curious as whether you would write about Altman, and if so, what film you would choose. I wish I could hear your comments during the Academy Awards. I'm just glad I'm not the one being asked to keep a straight face while announcing the Best Song nominees.

I know, I have been a bad Siren. My everyday identity as an Overwhelmed Mom sometimes prevents me from leaping into the phone booth and popping out with pithy film observations. I love every overwrought, self-congratulatory moment of the Oscars and only wish everyone didn't keep dressing so tastefully these days. Damn it, where is Cher?

Next year we should do a chat-board simulcast so we can all kvetch at the same time!

Gloria - I never thought of Duck Amok that way, but by God you are absolutely right. Hee hee!

I haven't seen 'The Player' since it came out. You've made me want to watch it again, it is very good indeed and I had forgotten about the remake of 'The Bicycle Thieves'.

Here in UK we are waking up to the Oscar news, the headline story is that 'Crash' won best picture. I think 'Crash' in many ways owes a debt to 'Nashville' / 'Short Cuts' - what do you think?

Campaspe, what a joy this post was! I'm getting to all the Altman posts about a week late (that's my life), and yours cheered me a lot. I loved your invocation of Daffy Duck and your speculation about whether the Hollywood talent pool has the sense God gave a cartoon duck. I've linked to your post as the last word in my own (rather meager) consideration of The Player, which should be up and running tomorrow-- part four of my Altman retrospective and, undoubtedly, the last straggler in the very loose Atman Blog-a-thon. The hour is growing late, and I'm not quite where I want to be yet with the post, but I hope you'll check in and maybe drop a line or two when it's finished. Thank you so much for your own terrific work. You're an inspiration, and your good humor is well appreciated! I look forward to more!