The Siren Emerges From Slumber

There has been a great deal of upheaval at the Siren's household, forcing her to deal with many matters mundane and neglect her patient audience. (She did manage a post here at the Cinemarati, regarding the very skewed and not-much-good WGA List of 101 Greatest Screenplays.)

The big news: The Siren's household is relocating back to New York City, Mr. C having accepted a job offer. Good news, because the Siren has been homesick for New York all along, and while she has grown quite fond of Toronto she hasn't assimilated all that well. There is a large part of my character that remains resolutely New York and pops out at inopportune moments, such as when I snapped "Lady, do we KNOW each other?" at a woman who wanted to know why my kids weren't wearing hats. Just because at least one Canadian woman found this retort hilarious doesn't mean this is the sort of response you get from someone who has moved to Toronto and is now Blending In.

The bad news is that we need to find an apartment in New York, a job more soul-sucking than getting the Augean stables in party-ready state. I was delegated to go to the city and find a place, so here I have been, dealing day after day with a unique Big Apple breed known as rental brokers. This dreadful species, rather than charging landlords for finding good tenants, as I am told they do in sane markets, in New York charges tenants about 12% to 15% of a year's rent for what amounts to unlocking the apartment door and running a credit check my toddlers could probably manage if you showed them which mouse button to click.

While I've encountered a few nice specimens, the rental-brokerage profession attracts the venal and duplicitous in droves--rather like the law, only without attorneys' frequent saving graces of intellect and mordant humor. My days I have spent in the company of brokers. At night I have retired to my friend's apartment in Park Slope (christened "the Slop" by an irreverent Siren pal), filed my nails and read political blogs to release bottled-up aggression. I venture out to buy a newspaper and find myself hating the locals who emerge from the brownstones because they have apartments and I, as yet, do not.

Understand, please, that the Siren hates conversations about real estate, and here that is what she must discuss, day after day. In New York, talk of apartments is doused in envy and surrounded by a sense of fickle chance. You might as well sit around and talk about lottery winners all evening. If, after all, there really is a hell and the Siren is sent there, by day she will have to write reports about the bond market. By night, she will be forced to discuss diets and real estate.

Some things are finally shaking loose here, and I hope to be back in Toronto packing for a move at the beginning of June. Meanwhile, I'm preparing my ballot for the Best of the Best Pictures over at Edward Copeland's place. I'll unveil it in a couple days. My chaotic life has pushed Joan Crawford to the back burner, which would probably have the lady at my throat with Jungle Red talons if she were still around. All the same, it's back to the rental counter for me, for now.
Posted by The Siren at 1:30 PM 9 comments:

Ah, the joys of toddler twins, or Infectious Disease Vectors as we sometimes think of them at the House of Campaspe. Who says the Domino Theory is kaput? Last week we had a nifty demonstration of it, as first the daughter of the house, then the Siren, then the son of the house were felled by a stomach virus in neat little two-day increments. After waiting with pious patience for Mr. Campaspe to succumb, the Siren realized that this was a decidedly sexist virus. Two more days elapsed as she recovered from her pique.

She hopes that by now you have been over to Edward Copeland's place to check out the results from the Worst of the Best Picture poll. Going My Way did not make the top (bottom?) twenty. Over the weekend the Siren re-read City of Nets and was reminded, however, that her hatred for the movie gives her some august company. Billy Wilder, nominated that year for Double Indemnity, had high hopes of winning on Oscar night. When the priest movie's Leo McCarey was called to the stage as Best Director, Wilder "could not bear it...He stuck out a foot and tripped him."

Copeland incidentally has two more great pieces up, one on David Lean and another on Dog Day Afternoon. (Wonder if he has toddlers. Harrumph.) The Siren agrees with him on the Lumet, vehemently disagrees on Lean, but such is the fun of blogging. Assuming her Home Sweet Petri Dish stays healthy she may rise to Mr. Lean's defense in the near future. Copeland has also issued a challenge, as promised, to name the Best of the Best Pictures. That should be almost as much fun as the first poll. Results are due by midnight CDT on April 29. Address same as before, eddiesworst@yahoo.com. By the way--if you are wondering whether to differentiate between "best" and "favorite"--he suggests that you don't. 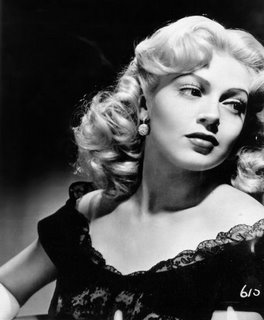 Meanwhile, Peter Nelhaus of Coffee Coffee and More Coffee has taken up the Siren's plea for another look at Lana Turner. This year, on the June 29 anniversary of her death, we're hoping to see some love for Lana. Peter is planning to tackle The Sea Chase. The Siren is having a bit of choice paralysis, as there are at least ten Lana films she could happily write about, from They Won't Forget to Portrait in Black. Maybe she'll do 'em all. We shall see.

Lastly, the Siren notes the passing of Henry Farrell, who wrote the novel Whatever Happened to Baby Jane? The bizarre 1960s trend of putting once-fabulous actresses in campy horror films just makes the Siren sad, for the most part. But Baby Jane, the first, was certainly the best and it did give the two stars a last hurrah, albeit at the expense of altering their images for all time. The Siren still prefers a much earlier Joan, and her small tribute is on its way.
Posted by The Siren at 8:59 AM 6 comments: