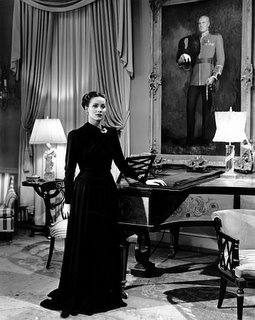 On a beautiful day in Brooklyn two weeks ago, the Siren sat down in a cafe, opened a newspaper and read that Alida Valli had died at age 84--and felt real sadness, because her daughter is named Alida.

Little more than three years ago Mr. C. and I had a lot of fun discussing names for our boy-girl twins:

"Nixon and Agnew? which name does the girl get?"

and so forth. When we finally got serious I went through some old movie books and hit on the name Alida, because it is beautiful and unusual but also simple and pronounceable. (Hail Girish, the only one of my film-mad friends who responded to "my daughter's name is Alida" with "Valli" as fast as any game-show contestant.) David O. Selznick marketed his Italian find as just Valli, hoping to echo the single-name impact of Garbo. In this, as in so many of his later-life decisions, he was wrong, because her first name is the business.

The Siren treasures her small connection to Alida Valli, one of the few she has to the Golden Age. When I graduated college, I went to work at a literary agency. One of our clients was Oscar de Mejo, Valli's first husband. I loved his courtly voice and beautiful manners on the telephone, and (yes, I am this starstruck) I also loved the idea that he gave me three degrees of separation from Orson Welles. AND Carol Reed AND Alfred Hitchcock AND Gregory Peck. 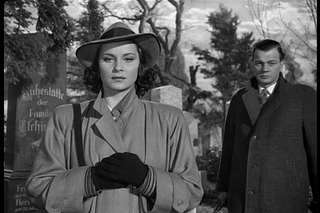 So Alida it was, though I had seen only two of the first Alida's films. She made a lot of good movies, but is most remembered for three: The Paradine Case, a minor Hitchcock that the Siren still enjoys a lot; Senso, a legendary Visconti film that the Siren prays will be released soon on DVD; and The Third Man, without question the actress's defining role for audiences outside Italy (and probably inside Italy too).

Good lord she was beautiful, "head-swivelingly beautiful" as Martin Scorsese put it, so stunning that even the hideous raincoat she wears for most of Carol Reed's masterpiece can't douse her light. The opaque, rather chilly quality she had in The Paradine Case was antithetical to a true femme fatale and hurt the movie. But in The Third Man, it's perfect. Her character, Anna, is as hollow and burnt-out as Vienna. Her eyes show life only when Harry Lime is mentioned. That he's worthless doesn't matter; he is all that connects her to the emotions the war blasted away.

The original Alida had bad bumps in her admirable 100-movie career, including a false accusation of fascist sympathies (someone claimed she had an affair with Goebbels!) that almost kept her out of the U.S., a stint in Hollywood that didn't last long enough and a scandal that sidelined her for about three years after she returned to her native Italy. That's just the professional side, and it was fairly minor compared to what her personal life dished out. After the Nazis pushed into Italy, she laid low for a while to avoid having to do propaganda films. Her first love, a fighter pilot, was killed in action. Her mother was shot (though not mortally) by anti-fascist forces for suspected collaboration. The scandal that almost ended her career saw her confirming a man's alibi in a celebrated murder case. 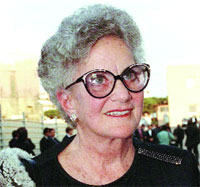 Each phase of Valli's life found her picking up and moving on, to Hollywood after Europe was leveled, back to Europe when Hollywood turned cold, to the theater when movies proved scarce or unfulfilling. And, with confidence even many non-famous beauties don't possess, when the wrinkles began to come, Alida Valli let 'em come.

Mr. Campaspe has Mediterranean coloring, and when the Siren talked him into the name "Alida," she envisioned a daughter with Valli's dark hair and olive skin. In one of life's little practical jokes, my daughter is a green-eyed blonde, a different kind of beauty altogether. But as I read more about Alida Valli's life, I realize I dreamed of the wrong inheritance. My Alida would do better with just her namesake's resilience and grace.
Posted by The Siren at 6:07 PM

What a magnificent article! You paint such a complex portrait of Valli, and the tinge of your sadness that I feel reading through the article touches me very much.

Earlier today I put The Third Man into my Netflix queue, and I was thinking of watching The Paradine Case again. I remember how simply stunning she was in it! Thank you for such a beautiful tribute.

By the way, I sent you an MUA-mail.

Campaspe, I agree she was a fascinating screen presence. She was so ravishingly beautiful and could sport icy hauteur like nobody. And maybe she was not right to play Mrs. Paradine, but I wonder Hitch preferred choice, Greta Garbo (whom he expected to rescue from her retirement) would also have been satisfactory as the colonel's wife who develops lowly passion for the gardener (but then Louis Jourdan wasn't either the lady Chatterley's lover buck type) whose faithfulness to the Coronel was a bit ambiguous...
There was an interesting article on her by Mr. Gregorio Morán appearing in "La Vanguardia" last saturday. The article is too large for me to translate to the full -having to cope with some deadlines!-, but I am offering here a rough translation of a few selected bits:
"My fondness for Alida Valli was not a love at first sight. It sufficed for her to raise her chin, her cruel fossettes appearing, to drive me into anguish. Does she look at me or does she despise me? She was the actress who most precisely expressed contempt (...) To me, Alida Valli will be always that fixed stare, between the ground and the void, in the long travelling which ends The Third Man (...) That woman walking in the long travelling -which I always find overbearing and only lasts a few seconds, is the representattion of something uncommon, magnificent and terrible: that of someone who loves in spite of crime"
You can check the full article for free up to next saturday (afterwards it will be pay-per-view) here:
http://www.lavanguardia.es/web/20060506/51256432129.html

Turner Classic has a wonderfully crisp copy of 3rd Man on mid-afternoon this past week. Oddly the first time I saw Valli was in the late fifties when televsion obtained a number of Hollywood films that never quite made it, like Night of the Hunter. One was a tear jerker "The Miracle of the Bells" with Fred McMurray, Frank Sinatra [playing a priest], Lee J Cobb and Valli. I haven't seen it in years but to the teenager who saw it, the one name person cast a fascination.

Gloria: I have a vague memory of Hitchcock wanting Garbo for that role; she might have done better, but ultimately the fault was in the script and also with a young, green Gregory Peck, who didn't give Valli much to play off of.

Exiled, so good to see you again. One thing I didn't mention was that according to a couple of obits, Alida described Sinatra as a great unrequited love of hers. If so I think she dodged a bullet there, as Sinatra wasn't exactly the ideal mate. I would love to see "Miracle of the Bells." Most film historians say it bombed because it opens with Valli's death, and it's notoriously difficult to make audiences care about a character who's already dead.

What a great post! Well done.
Yes, this was sad, what a true beauty. If you haven't seen 'Eyes without a Face' then she is also excellent in that but a darker role, as she is in '1900'.

Yes, 'Senso' needs to be on DVD. Hasn't been shown on British TV in years to best of my knowledge.

However, as one who has frequently experienced firsthand the ability of Americans to mispronounce even the simplest of foreign names, one has to ask: How exactly do you pronounce Alida?

Richard: I recall "Eyes without a face" as a very good film... but not one I would like to see again: it was so disquieting (even without the gore effects that present horror films rejoice in)... maybe it was the mix of horror and poetry.

Campaspe: the original -wished- Hitchcock choice for the Gregory Peck character was Laurence Olivier (his idea was a character in the Ronald Colman type/way).
However, I have no warm feelings for Olivier as a screen actor, so I don't think that LO would have been an improvement. (maybe Robert Newton as the gardener, as Hitch wanted would have)

Tonio: Ah-LEE-da. Which is how I have always heard it pronounced, by Scorsese and even a couple of Italians. :)

Gloria: I am not a huge Olivier fan either, though he's certainly been very good in some movies.

Richard: Eyes Without a Face is definitely on my must-see Valli list, along with Il Grido, the original We the Living and The Aspern Papers. I should probably buck up and see Suspiria too but Argento frightens me.

I'm so sad to hear about Alida Valli's passing! She really was perfect for The Third Man. (I was on a strange must-see-all-Orson-Welles-Joseph-Cotten movies kick back then!) But after I saw it, Netflix didn't have too many other of her movies available, to my chagrin. Maybe that's changed, it was quite a while ago? hmmm...

Koneko, there is NOTHING strange about wanting to see all of Orson Welles and Joseph Cotten! that is a very sensible thing to do.

I hear you are making a big move too! **smooches** Lucky thing, to be near dear Patti & Annie. Email me when you get a chance.

i love reading your blog but i rarely comment. this post, however, is forcing me to come out of hiding. alida valli was so great in the third man. i remember watching it right after i had seen citizen kane (this was back when i just began to really discover films of the past). i was just blown away by alida's performance. your tribute was lovely. i didn't know about the other controversial events in her life so thanks for the background info.

Paradise, thanks so much for the praise! I love comments so I hope you leave more in the future.

I am sitting here so moved, dear Siren. This article was so personal, witty (well, you're ALWAYS witty, dear; no shock here), lovingly humorous, explanatory, provided nuggets of history, and simply a beautiful tribute to Alida Valli. She is smiling down at you, as I am from L.A.