"Why Are You Talking French?"

The Siren has mentioned her film-book collection, an oddball assortment of film biographies, criticism, star autobiographies and interview anthologies. One book, however, stands apart for her, and probably for anybody who reads a lot about film. It is Otto Friedrich's City of Nets: A Portrait of Hollywood in the 1940s. Friedrich was a historian who approached Tinseltown the same way he approached his other urban histories, of Paris and Berlin. To read his book is to get a picture of Hollywood high and low, from the studio heads, to the union guys on the lots, to the mobsters that both had to contend with. Friedrich also wrote elegant prose, something one encounters too little in Hollywood books.

Anyway, the Siren has two favorite passages in this book. One is the story of Dimitri Tiomkin, David O. Selznick and the "orgasm music" for Duel in the Sun. This is the other one, tucked away in a footnote. A week from Monday, the family Campaspe flies to Paris for a small rest. The Siren (who will still be posting from there whenever possible) will thus be exercising her meager French. Guess that is what made her think of this:

At an executive meeting at MGM, Nicholas Schenck was fretting about [producer Mervyn] LeRoy's failure to stay within his budget on The Wizard of Oz, and [Louis B.] Mayer presented the young Joseph Mankiewicz as an experienced writer and director who could explain such things. When all the executives turned to Mankiewicz for an explanation, Mankiewicz felt some irresistible impulse to evoke Victor Hugo and blurted out, "I suppose LeRoy s'amuse." Schenck said, "What?" Mankiewicz repeated his inspired line. Somebody said, "That's French." Schenck said, "Why are you talking French?" "All I could think of," Mankiewicz said later, "was 'Why am I here?'" 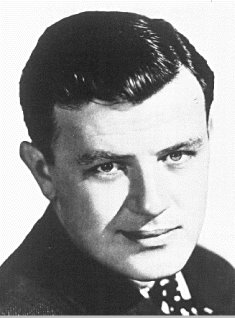 Hope everyone had a happy and restful weekend.
Posted by The Siren at 7:56 PM

How can you rest in Paris? Too many museums and lots of movies. May I recommend Russell, Kansas as a cute little place to get away from it all. And then you're going to move to Brooklyn? Pardon my French but, Oy Vey!

There are so many memorable quotes from those days: "Give the people what they want and they will turn out for it," must be the favorite of everyone.

I also love the line attributed to Michael Curtiz to the effect that the next time he needed an idiot to do something, he would do it himself.

Today we have the inane statements of Mr. Cruise, or the report that Brad and Angelina are holding out for 2 million for the photos of their Prince of Wales.

Hi!! Just dropping a note to tell you that I have just discovered your blog, and am enjoying it very much. Take care.

Peter: When you have twins, just the luxury of a walk by yourself in Paris becomes all the activity you need. I am determined to see the reopened Orangerie, though!

Exiled: One of my favorite Hollywood lines comes from Billy Wilder, who seems to have made more memorable quips than almost anyone. He was filming in Paris and his wife Audrey had been struck by the idea of installing a bidet in their Los Angeles home. He looked everywhere for a place willing to ship a bidet to the States and could find none. So he cabled Audrey: "IMPOSSIBLE TO FIND BIDET STOP SUGGEST YOU DO HANDSTANDS IN THE SHOWER STOP."

Jeff: thanks so much for stopping by! I like the looks of your blog, too.