Voices of the Screen

Time Warner took pity on our DSL connection about two weeks ago, but there is no television at the Siren's house, a situation she will probably rectify soon. So as events unfold in Lebanon, all she has are voices, from the BBC news service and on bad phone connnections. We have friends and relatives there. I was married in this hotel, six years ago. Everyone we love is safe, so far. It is hard to concentrate on blogging or anything else. It will be another couple of weeks before we get a TV, and I suppose that has its advantages at the moment. The images on my computer are bad enough. For once, I don't want to see the pictures moving.

In times like these, distraction is probably as good as it gets. During the first Gulf War I read all of Bruce Catton's Army of the Potomac trilogy, blocking out one set of hostilities with the echoes of another. I am at the point now where any war reading is out of the question, and without movies on a screen what I have are voices in my head, lines and scenes I can replay. I suppose I take it for granted that people who read my blog miss the Golden Age of movies as I do. We talk about old stars, directors, the incredible beauty of black-and-white, the snap of the dialogue, but so far we haven't discussed voices.

Early talkies did the human voice no favors, hitting the squeaky high notes with a frequency that gelded male stars and made female ones sound like Kewpie dolls. Once technicians got the sound more under control, though, performers began to stand out on the basis of their voices. Vaguely aristocratic tones like that of Ronald Colman were especially coveted. You strove for that mid-Atlantic accent, meaning not Delaware and Pennsylvania but somewhere in the middle of the ocean, between England and the former colonies. Eventually individuality blossomed, and the full spectrum of American accents was heard. The Siren thinks you hear a much wider variety of dialects in 1930s movies than you do in modern ones (notwithstanding, however, the ghastly parody that stood in for most black dialect, and the way Asian and some other foreign speaking patterns were mocked).

Anyway, all this got the Siren thinking about her favorite screen voices. And she started thinking about criteria. Is it sheer beauty that makes a great screen voice? is it enough to be memorable, even if the voice screeches like a rusty hinge?

Well, beauty counts for a lot with the Siren, so most of her list is easy on the ears. Many of them were stage-trained voices, that particular discipline seeming to bring out the best in a speaking voice.

I am not putting these voices in any particular order, save to list my favorite of all time, Orson Welles. The Siren sees some eyes rolling. Well yes, it is quite dreary, his being a genius all the time, as ex-wife Rita Hayworth is said to have sniped. And his voice may be cheapened a bit for those who had to listen to his Paul Masson spots in childhood. But his narration for The Magnificent Ambersons is an intrinsic part of that film's greatness. His voice focuses as deeply as the camera, with a similar interplay of light and dark. The Siren can, at will, turn on a recording in her head, hear him speaking the first lines, and be enveloped by that atmosphere once more: "The magnificence of the Ambersons began in 1873. Their splendor lasted throughout all the years that saw their midland town spread and darken into a city..." 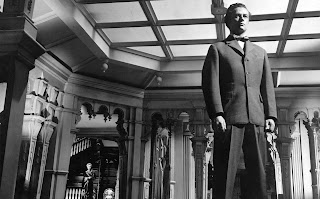 There never was and never could be another voice to give the climactic lines their sense of waste and inevitability, turning the much-anticipated fate of the Ambersons into the loss we all suffered when the great god Aut O'Mobile first took us for a ride. The bitterness and regret is there, but so is the gallows humor. We brought this on ourselves, as surely as George Minafer ever did:

Something had happened, a thing which, years ago, had been the eagerest hope of many, many good citizens of the town, and now it had come at last. George Amberson Minafer had got his comeuppance. He got it three times filled, and running over. But those who had so longed for it were not there to see it, and they never knew it. Those who were still living had forgotten all about it, and all about him.

The faint tone of mockery was seldom absent from the voice of Welles, whether he was discussing the relative merits of Swiss and Italian civilization or growling at an unlikely gypsy, "Come on, read my future for me." It's as much a part of the voice's allure as its baritone register. Gifted with an instrument that could (and often did) shout down the biggest-screen house, Welles was most effective when quiet--when a friendship ends with two words ("Sure we're speaking, Jedediah. You're fired") or a offhand observation to a bank examiner carries the weight of an entire failed life ("If I hadn't been born rich, I might have been a really great man").

So much for Mount Everest. Let's look at some other peaks.

Sydney Greenstreet. A delicious purr of evil, demonstrating that a slight touch of the effeminate can be as sinister as any macho growl.

Claude Rains. The stage-trained Rains had one of the most beautiful voices in the history of movies, able to convey sympathy in Now Voyager or gleeful malevolence in The Adventures of Robin Hood.

Peter Ustinov, Audrey Hepburn and George Sanders. "'Her English is too good,' he said. 'That clearly indicates that she is foreign.'" All three of these performers, possessed of exotic backgrounds, wound up speaking more aristocratic English than any Windsor. (Impossible to imagine any of these three locking the jaw and strangling consonants the way the royals do.) Ustinov, British-born son of a German father and a Russian mother, had occasional quavers that became part of his comic effect. The Dutch-raised Hepburn made her tendency to overarticulate a strength when she played comedy. Example: her somber, nun-at-vespers intonation of "It was as close to heaven as one could get on Long Island," in Sabrina. The artists at Disney managed to draw what a voice sounds like when the studio had the Russian-born Sanders give voice to a scheming, indolent tiger late in his career, in The Jungle Book. 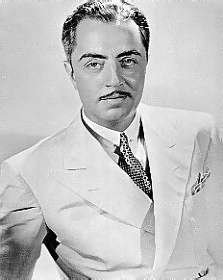 William Powell and Jean Arthur. Two superb light comedians, both with voices that could have been grating, but used to marvelous effect. Powell showed that an unapologetically American accent could still be elegant. Arthur frequently played women frantically trying to maintain dignity in an absurd situation. Physically, she wasn't a flutterer. It was her voice that betrayed her, cracking slightly as she tried to gain control.

Charles Boyer and Marlene Dietrich. The Continental accent, married to a naturally resonant speaking tone. Forever thrilling and (to borrow a line from Clive James) forever calling Americans across the sea to a place so sophisticated that people have sex with the lights on.

Robert Mitchum. Enough about the eyes. That silky voice seemed to veil just as much depravity as those heavy lids.

James Cagney. Pure New York, a rapid-fire delivery that suited the slang of the time like no other.

Charles Laughton. One of the most versatile voices the movies ever had.

Irene Dunne. Dunne, possessed of a very high-toned and vaguely Southern speaking manner, often swallowed words, and some of her best deliveries are sotto voce, as in The Awful Truth: "Well, I mean, if you didn't feel that way you do, things wouldn't be the way they are, would they? I mean, things could be the same if things were different."

Margaret Sullavan. Sullavan's marvelous hint of a rasp helped show the inner strength of doomed characters like the ones in Back Street or Three Comrades.