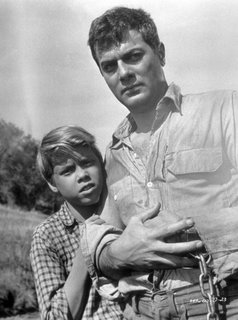 A general Curtis postscript: Last year I read his 1993 autobiography, cowritten with the excellent biographer Barry Paris. It is a strange book indeed. Curtis vaults beyond arrogance, into a territory where your self-love is so enveloping you have no idea how you sound to other people. (For instance, when Curtis describes how he decided to quit visiting his pathetic, institutionalized schizophrenic younger brother.) The frank selfishness is so consistent that after a while, amazingly, it gets to be kind of endearing. The man lets it all hang out. And once you have read the book, it isn't surprising that The Defiant Ones has something in common with other great Curtis performances in Sweet Smell of Success and The Boston Strangler. He isn't afraid to be disliked, which the Siren would call a mark of any real actor, as opposed to a matinee idol. It is a shame that Curtis's career, with a few bright exceptions, petered out in the 60s in a series of silly farces--jobs taken in part to make child support payments for his six kids from various marriages.
Posted by The Siren at 8:51 AM 5 comments: