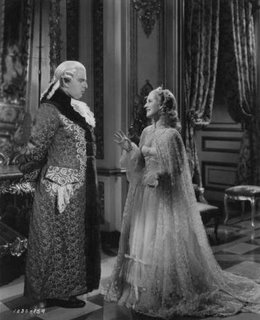 Certain cultural moments leave the Siren scratching her head, and the greeting accorded Sofia Coppola's Marie Antoinette is one. Not because the Siren dislikes the movie--she hasn't seen it and isn't enough of a Sofia fan to drop the newborn and rush out to remedy that--but because all the critics keep telling her it's based on a "revisionist" view of the doomed queen, an analysis that doesn't paint the woman as heartless, extravagant and silly.

To which the Siren replies, just what in the sam hill is so all-fired revisionist about that? Has any American film ever portrayed the French queen as anything other than sympathetic? Okay, the Siren can think of one: Start the Revolution Without Me, a breathlessly silly 1970 comedy the Siren loves. In it, Billie Whitelaw plays MA as a scheming nymphomaniac, a characterization the Revolutionary pamphleteers would have recognized and relished. Otherwise, l'Autrichienne gets sweetheart press over here, and always has. Prime example: the 1938 biopic starring MGM's Queen of the Lot, Norma Shearer.

No European film could ever be quite as royalist as this one. As hagiography, it makes Ivan the Terrible Part I look like Scarface. Marie is a victim of history, a good-hearted woman with a strong sense of duty, too noble to act on her passion for Count Axel von Fersen (Tyrone Power, barely there) after Louis XVI gets his (delicately unmentioned) phimosis cured. The revolution, it's suggested, wouldn't have been necessary if that nasty Joseph Schildkraut, playing the Duc d'Orleans, hadn't kept stirring things up. Starving peasants? Overtaxed middle class? ruinous wars? Geez, it wasn't Marie's fault that she didn't know how to stop a bread riot. She was just trying to be the best darn Queen of France she could be.

Still, I defy anyone with a love of classic film to view Marie Antoinette without, at minimum, getting some pleasure out of Cedric Gibbons' art direction. You could say MGM was unable to use Versailles, but the real answer is why bother, when they had the back lot? Gibbons worked not to recreate the world's most famous palace, but to suggest and, finally, outdo it as only MGM could. The spaces are bigger and bolder than in real life, full of laquered staircases, blazing klieg-light candelabra, and furniture and tapestries brought back by buyers rummaging through France. When the studio recreated the Hall of Mirrors for a ball sequence, they made it twice as big as the original. That's a pretty good metaphor for MGM's entire aesthetic, right there.

Adrian's costumes were equally over the top--check out this marvelously detailed site for a complete rundown of each costume. The site also has color snapshots of those costumes which have survived to the present day, and the gowns may be more lavish than anything the real Marie ever wore. Irving Thalberg was planning this vehicle for wife Shearer when he died in 1936, and at first it was planned as a Technicolor feature. It is a crying shame that money considerations meant it was filmed in black-and-white. One fur was even sent abroad to be dyed the color of Norma's eyes.

Shearer was a fascinating person, as Gavin Lambert demonstrated in his 1990 biography, but the Siren has a hard time warming to her performances. She had a marvelous voice, elegant posture and one of the most beautiful profiles in screen history, but she was very mannered, a back-of-the-hand-to-the-forehead kind of dramatic actress. Marie Antoinette, however, definitely ranks with The Women and Idiot's Delight as one of Shearer's best talkie performances. Shearer spent hours learning to move gracefully under the heavy costumes, and her carriage is always aristocratic. That physical focus frees up Shearer's face and gestures, and her emotions flow much more organically than usual. The movie was a personal favorite of the actress. (In later years Shearer owned prints of only two of her movies--Romeo and Juliet and Marie Antoinette.)

And Shearer's greater believability as Marie Antoinette also probably had something to do with a wee bit of identification. Thalberg had been dead two years, and Shearer's power as Queen of the Lot was ebbing away. She had wanted old pal Sidney Franklin to direct, but an underhanded maneuver (did he make any other kind?) by studio chief Louis B. Mayer resulted in Franklin being replaced with W.S. "One-Take Woody" Van Dyke. The replacement probably helped the picture (Van Dyke, of Thin Man fame, was a better director), but such a thing would never have happened when Norma ruled at the Boy King Thalberg's side. When filming stopped, she was only four years and five movies from retirement.

The 1938 Marie Antoinette puts suffering Shearer front and center throughout, but it is the kings who stand out. John Barrymore seems more dissipated than even his role as Louis XV requires. But the Siren's favorite, and the real reason she would watch the movie again, is Robert Morley as Louis XVI. The Siren is an ardent small-r republican, prone to point out irritably that tearjerking scenes of Marie separated from her children obscure the question of the sufferings of France's less privileged children. But Morley, spending his last night alive lovingly repairing his son's toy soldier, manages to make her feel sorry for a Bourbon. Touché, MGM.
Posted by The Siren at 12:12 PM 13 comments: