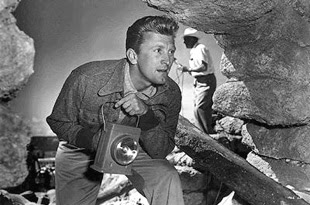 When you see Ace in the Hole (and the Siren does hope that is "when"), you will immediately understand why, upon its first release, the movie stiffed colder than Harry Cohn's heart. Austrian-born Billy Wilder always claimed affection for his adopted country, but you would never know it from this very great movie and its portrait of what H.L. Mencken called the species Boobus Americanus. There we are--grasping, foolish, gullible, addicted to lousy food and cheap entertainment, as distractible as a toddler. This film is bitter medicine even in 2007. Send not to know for whom the bile flows--it flows for thee.

Ace in the Hole's Charles Tatum (Kirk Douglas at his best) is a big-city reporter, a sharp cookie who's made himself unemployable. When the movie opens he is talking his way into a job in New Mexico, despite his open contempt for the surroundings. "Even for Albuquerque, this is pretty Albuquerque," is his review of the local paper. With a single dissolve, Wilder establishes the passage of a year, and we find Tatum's contempt has turned to desperation. He hasn't found a single story capable of getting him back into large circulation. But while on his way to cover a rattlesnake roundup, Tatum stumbles across a one-stoplight town called Escadero. There, Leo Minosa (Richard Benedict) lies trapped by a cave-in after going too far into an Indian burial site. Here's the human-interest story Tatum's been waiting for--if only Minosa will stay buried long enough for the reporter to milk the pathos.

The local contractor believes he can rescue Leo just by shoring up the walls, which would take about 16 hours. Good for Leo, bad for Tatum. With the connivance of the local sheriff, who is up for re-election, Tatum strong-arms the contractor into drilling through the top of the mountain, a process that could take five days. Thus begins the great ghoulish parade of people seeking something out of Leo's plight. Tatum, of course, wants his career back. His sidekick Herbie (Bob Arthur), a callow young photographer, wants to hitch his wagon to Tatum's. Leo's wife Lorraine, played so dense and so hard by Jan Sterling you could use her to pound a piling, wants out of her Escadero existence and away from the sad-sack Leo.

You can read this movie as an attack on tabloid journalism, which it certainly is, but the press isn't the main target. Tatum is a heel, but he does have a conscience, albeit one that kicks him only faintly and too late. None of these characters have pretty motives, but worst of all are the crowds of people who arrive to camp out, buy souvenirs and eat junk food while waiting for a man to be rescued or to die. Wilder includes a beautiful long shot of a train pulling into Escadero after years of passing the whistle-stop by. What pangs trouble the passengers as they jump out, so eager to mill outside a possible tomb that they leap before the train stops moving? The same that trouble millions of reality-TV viewers, that is to say, none. The throngs believe they are just indulging their God-given American right to be entertained.

Wilder didn't much care for the common American, but he dearly loved the common man's lingo. Here he uses the matchless variety of mid-century Americanese like a dimmer switch, taking the movie from bright to dark. The script starts off funny, as Douglas delivers each staccato burst of sarcasm con brio. "I can handle big news and little news. And if there's no news, I'll go out and bite a dog," he says. To the Albuquerque paper's editor, Jacob Q. Boot (Porter Hall), he remarks, "I've done a lot of lying in my time. I've lied to men who wear belts. I've lied to men who wear suspenders. But I'd never be so stupid as to lie to a man who wears both belt and suspenders." Asked if he drinks, Tatum says, "Not a lot. Just frequently."

The one-liners continue, finally climaxing in the biggest laugh of the picture, Jan Sterling to Douglas: "I've met some hard-boiled eggs in my time. But you? You're twenty minutes." The laughs are quieter from that moment, until all smiles cease together, as Leo's chances get smaller. Nobody laughs when, late in the movie, Douglas tells Boot, "I'm on my way back to the top, and if it takes a deal with a crooked sheriff, that's all right with me! And if I have to fancy it up with an Indian curse and a brokenhearted wife for Leo, then that's all right too!"

As scalding as he is, Wilder doesn't leave audiences utterly without hope. A Wilder picture almost always has at least one character who acts as moral grounding--Edward G. Robinson in Double Indemnity, Arlene Francis in One, Two, Three, Nancy Olson in Sunset Boulevard. You can measure the movie's cynicism by the amount of respect and exposure that character gets. The Apartment, often called bitter, is one of Wilder's most optimistic films, in that the character whose essential decency anchors the movie turns out also to be the protagonist, Jack Lemmon.

In Ace in the Hole, the last good man is the editor Boot. He has about four brief scenes. He may believe in truth, so much so he has his secretary cross-stitch "Tell the Truth" on a sampler, but he is badly outnumbered.

Ace in the Hole is based in part on the real-life story of Floyd Collins. In the movie Tatum talks about the incident, without mentioning Collins' eventual death. No, what's notable to Tatum is the payoff for the reporter on the scene. Listen for Douglas, saying "Pulitzer Prize" the way you hear "Medal of Honor" intoned in a John Wayne movie.

According to Wilder biographer Ed Sikov, the movie also has roots in the even more tragic story of Kathy Fiscus , a three-year-old who fell down a well in 1949. Jockeys showed up, offering to be lowered to rescue her, as did the Philip Morris cigarette midget and some other little people from the circus. This may have sparked Wilder's decision to create the full-scale carnival that springs up next to Leo's mountain prison. See the director's camera come to rest on the trucks delivering the Ferris Wheel and other fairground rides: "The Great S&M Amusement Corp." Sikov notes that head Production Code enforcer Joseph Breen objected to the word "lousy" in the script, but apparently the carnival name flew right over Breen's flat little head.

He didn't work on the script, but we'll let later Wilder collaborator I.A.L. Diamond have the last word, as quoted in Sikov's biography:

Sure, they called it cynical. And then you see thousands and thousands of people turning up at Idlewild airport in New York to watch a plane coming down with bad landing gear. People clog the runway waiting for it to crash--and you ask yourself how cynical Ace in the Hole really was.

Note: This entry is cross-posted at Newcritics, a new outpost for Web criticism that is the brainchild of Tom Watson. The Siren hopes you will visit it frequently.
Posted by The Siren at 9:45 AM

We saw the movie last weekend. Manny loved that 20 minute hard boiled egg remark. I was not prepared to like it as much as he did, since he adores any movies about newspaper reporters.
It amazed me, though. The actors, camera angles, dialogue: "The circus is over," struck me as a reprise of "Elvis has left the building."
Among many other surprises was what an iconic sex-symbol Kirk Douglas was. Villainous or not, he was too gorgeous to believe. Though I really don't see many movies, it occurred to me that most of the ones I have seen have borrowed liberally from "Ace in the Hole": Douglas' protracted death scene(s), Leo's quiet, inevitable death, the corrupt but silly sheriff, the bored, callous, desperate wife...too many to list. They weren't stereotypes here, though. The whole thing played (to me anyway) as if new, first time, only time.

So who do we have to convince at Paramount that there are people waiting for the DVD? Ace is the one Wilder film I've never even seen once.

Kathleen, so nice to see you. My girlfriend was also bowled over by Kirk Douglas in his heartthrob heyday. I think the whole audience was loving it, and the theater was packed. So Peter, I don't know what it's gonna take. Surely Paramount chief Y. Frank Freeman's dislike of the movie can't be carried over to the current suits. Given how fashionable Wilder has become, surely *someone* has the brains to do this.

Age 8, I saw this in 1951 or the next year at a third run movie house near our home. I'm dating myself to those days films would begin downtown, and then work their way down the food chain. Billy, my friend, did not care for the lack of heroes. He was waitng for 'The Thing' which was to play there soon. It stuck with me, like Sunset Boulevard which I saw the year before. I've fleeting memories of scenes, and don't remember which title was used, but you've brought the film back to life.

My late wife's Aunt Dotty turned down a date with Kirk Douglas when she lived in NYC, probably late in the war. As I recall the story, he did borrow the vacuum cleaner from Dottie and Betty, my wife's mother.

I thouroughly enjoyed reading here! As a poet, I found it a very interesting and informative look at classic cinema...thank you!

I'm an Albuquerque native, and this movie is perhaps the only movie I've ever seen to "get" the town. (Especially as compared to, say, Little Miss Sunshine which is all wrong.) It's smart, viciously funny and genuinely suspenseful -- and this write-up conveys all of that elegantly. Thanks.

This is Wilder's Most German film. I'm thinking specifically of his years as a reporter and the time he interview Freud, Einstein and someone in the coming Third Reich on the same day.

I haven't the slightest doubt that Fassbinder saw this. The last shot is Pure Rainer.

Wilder was of course punished for this. Holding up a mirror to show people who they are is Bad Box Office. But the film lives and breathes still as NOTHING HAS CHANGED ABOUT THE MEDIA,

Like 'Reality TV' or movies like Jackass...just not my cup of tea. Not the movie the precept around it. Like following a missing jet liner for days after knowing the people are surly all dead, what do people really get from this?? Is there something chemical which feeds an otherwise unquenchable thirst for innocent blood to be spilled within smelling range for these 'jackels'....I really don't want to know.