Four Weddings: The Siren Does Not Hold Her Peace 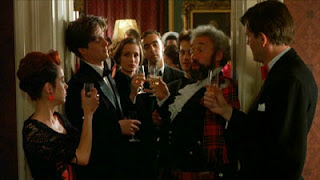 Here's one for the "What was I thinking?" pile: Four Weddings and a Funeral. When the Siren saw this in 1994, she thought it was darling. She saw it again recently and was, well, appalled. She must have been Blinded by The Hugh. Grant is a handsome devil, he knows how to time a line and he lends some appeal to his drippy character. But the rest of the cast--my god. It isn't that they are bad actors, they certainly aren't. It's that they are playing the most off-putting collection of conceited twerps this side of "The Simple Life." What's supposed to be so funny about these charmless snots sitting around weddings and mocking anyone who happens to be less rich, less slim, less witty or less drunk than they are? The primary love on display in this "romantic" movie is self-love. Hugh has to spend his time pursuing Andie Macdowell, whose prettiness cannot disguise the fact that her every performance since sex, lies and videotape confirms Ivan G.'s "Blind Squirrel" theory of cinema. The Siren now sympathizes with Martin Amis, who said if they had released Four Weddings in the 1960s, people would have torn the seats out of the theatre. In conclusion, Hugh yes, this movie, no.
Posted by The Siren at 10:47 AM

Back in '94, this was all the rage with the just-30 crowd, so I decided to give it a go. Hate isn't a strong enough word to describe my reaction to it.

I've always pinpointed this film as the beginning of the end for the romantic comedy. For years, every rom-com was billed as "This year's FW&AF."

As for Mr. Grant, he continued to play the same character over and over again -- the proper but boyish English chap who shocks and delights us with lines like "Fuckety fuck fuck." He was an interesting actor up until Bitter Moon but from then it was all downhill.

That Amis quote is brilliant.

The trouble with Andie MacDowell is what Pauline Kael said of Natalie Wood: She's the sex symbol that immediately banishes all thoughts of sex.

Filmbrain: it was in a New Yorker article. He & Salman Rushdie had to hang out in a movie while the security detail was doing something or other. At the end, Amis said, "well, that was bottomlessly awful. Why was it popular?" and if memory serves, Rushdie just said "people have no taste." When I read the article (I love Amis's prose) I thought, couple of old fuddy-duddies. Now I realize that they were so right and I was so wrong. Mea culpa. I had the same wake-up moment about Star Wars, and I think for the same reason, only it was Harrison Ford who had blinded me to the general crappiness.

TLRHB: brilliant. So true. Wood was really beautiful, but she was not sexy, which is why she is touching in the first half of Gypsy but not the second.

I think I still like FW&F quite a bit, but I haven't seen it since '95, so I guess I can't be 100% sure. I am a bit hetero to be excessively blinded by the Hugh, and I agree with LRHB about Andie McDowell, but the fat curly headed guy who wrote those books about Orson Welles sure had it going on, but where was I...

Oh, yeah, the tale of Martin Amis and Salman Rushdie. I also read Amis's article, which was actually about Jane Austen, and found the comment a little obnoxious in its "everyone intelligent needs to hate this movie because I do" tone. I also remember wondering whether maybe I was a shallow idipt for not loathing FW&F as much as Amis and, as Amis reported, his courageously fatwa-flouting friend.

My vindication came when I read a separate interview with Rushdie several months later, when that Amis article came up. If memory serves, after being asked about it, Rushdie said words to the effect of "never go the movies with Martin Amis", adding that he actually liked FW&F and was annoyed that Martin wouldn't stop complaing during the movie.

Anyhow, it I gather that Rushdie doesn't really hate this kind of film-making so much, since he actually appeared in "Bridget Jones Diary", co-written by Richard Curtis.

Oh, and I just caught that comment about "Star Wars". Heresy!

(Though the acting in that first movie really is, like, horrible. And why the hell didn't Lucas notice Carrie Fisher's impromptu imitation of Peter Cushing's accent while he's blowing up her home planet. Was George even listening?)

Bob, you have me laughing ... Martin says "if you like FW you are aiding the fatwa" ... you are undeniably right, it was a very superior sort of aside and at the time I thought, well excuuuuse me, Martin. But honestly, I really did hate this movie on second sight, despite Callow's undoubted skill. That coda from Rushdie is a hoot, though. "Martin, will you PIPE DOWN??"

Star Wars is OK, Empire is better and it was all downhill after that, but I did realize later that if it weren't for Ford I would not have liked it very much at all, despite the obvious debt to the Errol Flynn movies I love.

Movies like this, though, are why Hugh Grant says he hates acting and doesn't want to do any more movies. He always has to be stammeringly in love with a self-absorbed half-beautiful woman (an American) be too bashful to go after her but, just as she's about to leave, jump into a car and rush off to the airport to get her in time. Good God. Brits hated Hugh Grant for what they saw as this pandering to American audiences and only liked him a bit more when he was a bastard in About a Boy.

FW did lead the curious to the poetry section of Barnes & Noble in search of Auden's "Stop all the clocks, cut off the telephone," in numbers not seen since Stingo read "Ample make this bed, make this bed with awe."

Anna, I hope Grant continues to act because I sincerely think he is talented. His rom-com shtick is a lot harder than it looks, and given even a marginally interesting character (as in Bridget Jones) he can still grab the screen. But in terms of getting away from his image, it seems to be one step forward (About a Boy), two steps back (Love Actually). Although, from the Brit point of view, in that last one at least he got to tell off the prez.

MA Peel - yes, that was a very nice side effect. Poetry at the movies ... now there is a future post. "The untold want by life and land ne'er granted, Now voyager sail thou forth to seek and find." :)

Not a big fan of this movie, or of George Lucas. Empire isn't Lucas, at least not in my book--I think what made it special was Kershner. He made it come alive, in human terms, for the first and only time. It's the best thing Lucas didn't direct.

A film like FW&aF, also reminds me Peter's Friends (note: bear in mind I hold Brannagh as a much more interesting filmaker than Mike Newell)... I enjoyed it on first sighting, darn good actors and all..., but in the second one, I failed to fall again for the same rich and successful Cambridge ex-grads wailing around their "failed" and "troublesome" lifes (I feel any character from a Ken Loach film has more to complain about).

Noel, agreed. The first Star Wars definitely has verve and mischief, the second manages to add some actual sex appeal, but from then on out, it was cutesiness and the Force, not a good combo.

Gloria, I have not seen Peter's Friends a second time but I suspect it might not hold up. On the other hand, I re-viewed The Big Chill a while back and was pleasantly surprised. The first time I had thought it was too precious and navel-gazing; second time it, well, sort of still was but I appreciated the tartness of the humor a bit more.

I forgot about the 'Stop all the clocks' speech. Has anyone ever seen the AMAZING Canadian tv show called The Industry? (If you want to find it, the main comedian involved is Rick Mercer - he's an important figure in the Canadian media as far as I can tell, kind of like a Canadian Jon Stewart - sorry to Canadians for my ignorance) There was a great episode where they re-did that speech for a funeral scene for the fictional Beaver Creek programme. I'd recommend 'The Industry' to everyone who can find it - like The Office only way smarter and way better, and a great theme song.

Andie McDowell is an actress with very little range, but she has a nice screen presence if she is given a role that isn't too demanding. She is an important part of one of my favorite movies - Groundhog Day, where she is practicaly glowing on the screen, and she makes the perfect love interest for Bill Murray.

I like Four Weddings for the most part. I think I read somewhere that in the original source material (at IMDB it appears to be an original screenplay, so I'm not sure what I read on this) the character of Carrie was supposed to be a wild American, a free spirit type and was to be contrasted with the more reserved and staid British. I think she doesn't quite come off this way.

Also noticed at IMDB while checking the screenplay origins that Jeanne Triplehorn was originally cast in the Carrie role, but had to drop out. Now that would have been a real disaster for the movie, she just knows how to play annoying.