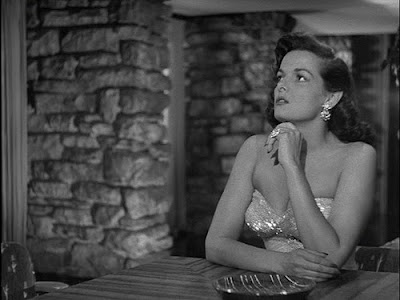 The Siren has always divided the screen personas of great beauties into two categories: those who would steal your man the second your back was turned, and those who would just as soon knock back a few with the gals, while the man lopes off until such time as his presence becomes nonsuperfluous once more.

Jane Russell, who has died age 89, belonged to the latter category. Her chief asset was likability, but that's a rare quality in a woman so stunning. There aren't many sex symbols who seem chummy on screen. A guy could buy her a beer without being ensnared forever; a woman could lament an errant lover to her without fearing that Russell might snap him up on the rebound. Russell had talent; witness her hilarious courtroom scene in Gentlemen Prefer Blondes, in which she out-Marilyns Marilyn, or her perfect reactions in The Paleface, one of Bob Hope's funnier movies. She had moxie, too; "don't let her fool you," said Hope. "Tangle with her and she'll shingle your attic."

Without hesitation the Siren would name His Kind of Woman as her favorite Russell movie, even if the film really belongs to Vincent Price. Her Lenore Brent is a different noir character from the femme fatale; it's the Gilda type, a woman who seems trampy but really isn't. When Lenore says "Wherever I am, I sing at the drop of a hat," you want to say, "Of course you do, doll." 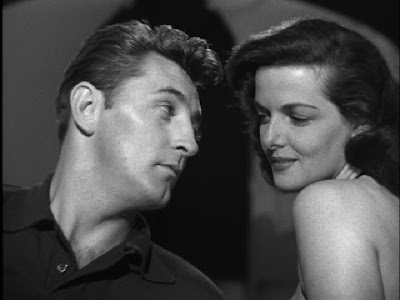 Mitchum and Russell had liked one another as soon as they met on set; their mutual lack of pretension made them the right kind of friends. It's impossible to view the TCM interview with Russell and Robert Mitchum, filmed not long before Mitchum's death, and not like her even more. (The interview is included as an extra on the Macao DVD.) Mitchum gives one of the most screw-you performances the Siren has ever seen from any actor on any chatfest. Robert Osborne goes from surprise, to discomfort, to outright desperation as he tries to get more than a monosyllable out of the uncooperative legend slumped next to Russell. The actress' treatment of her old co-star is that of a loving spouse after decades of marriage to an impossible coot, as she tries to nudge him into courtesy.

But as biographer Lee Server told it, Mitchum, as much as anyone, had boundless appreciation for the things--many more than two, thank you--that made Russell such fun.


He loved to tell the one about the pestering reporter who couldn't believe a girl with her 'image' read the Bible and went to church each Sunday. 'Hey buddy,' she told him, 'Christians have big breasts, too.'

I crossed my heart, one full-figured gal to another, to send her to her rest in the Lord.

I agree with everything you said here, Siren, and I actually knew a woman like that in my younger days: a gorgeous sex bomb who was still a gal's gal.

Wasn't she putting together shows in senior homes up until a couple of years ago?

What a force of nature! You sure can't say she wasted anything the Good Lord gave her.

Must raise a toast to Jane and thank her for the silver screen fun she left as her legacy. Now it's time to cue up that Gentlemen Prefer Blondes/Son Of Paleface double bill.

jesse said...
This comment has been removed by the author.
2:25 AM

Glad to see a mention for His Kind of Woman--I too love that film. In all of her films she seemed game for anything, a quality I had really been appreciating more and more. A real class act.

Thanks for the beautiful tribute.

-jesse @ Memories of the Future

So glad to hear that interview's on the Macao DVD.

And here she is at the Oscars two years back

And it wasn't just her breasts. She was a knockout in The Outlaw.

My favorite image of Jane Russell is from Raoul Walsh's Revolt of Mamie Stover. Russell is on top of a hill overlooking Hawaii, back to the camera, with the kind of defiant stance that would normally be associated with such Walsh heroes like Gregory Peck or Errol Flynn.

Amen: Jane Russell was never better than with partnered with Robert Mitchum -- especially in Macao.

Oh, I do love that double-interview. Mitchum is positively impenetrable, but the affection between him and Russell is palpable.

To me she will always be Dorothy in Gentlemen Prefer Blondes, mostly because that was a film that loomed very large in my life for a very long time. I loved that she got all the best lines. And dear lord she was beautiful.

Hamletta, I, too, am a full-figured gal who treasures Ms Russell like a soul sister, despite learning of her aggressively conservative politics in the NYT obit. I much prefer this tribute, which concentrates on what she was known for.

She was a helluva gal, and there's never too many of those to go around.

Oh, Karen - you said it! His Kind of Woman is a treasure, but Miss Russell will always be Dorothy to me too, because I saw her at my most impressionable. She made me believe I could be a smart showgirl. I remember the Playtex ads too, and at the time couldn't figure out what she meant by "full-figured girls". I had to ask my mother.

Karen & Trish, I am going to update this with a link to a very nice piece on the Guardian's blog, that deals with Russell's politics in a nicely balanced way. Much more importantly, it's got a great appreciation of her as Dorothy.

I certainly share with The Siren and Karen my love of "His Kind of Woman." Something about the way she sings "Five Little Miles to San Berdoo" ... I also share David's love of "Ain't There Anyone here For Love."

I should add, though, a comment that a trusted friend made about JR's mean-looking mouth, which he jpokingly described as "terrifying." Of course the nature and the personality conveyed are all benign and supportive and welcoming, but ... one gets a feeling that JR was not an individual to be messed with (see the "shingle your attic" comment above).

JR's autobiography, which I've picked through at leisure and is quite enjoyable, also quotes a comment that Maria Ouspenskaya allegedly made about her pupil: "[with spelling changed for comic effect] The trouble with you, Jane, is you have no energy." And it's true. When one looks at Russell on-screen one sees strength, one sees solidity -- but fleetness or hyperactivity are not among the qualities observed. What she conveyed was more like an attitude of "Stand back and watch."

In addition to what every obit seems to emphasize, she had a great face, great eyes, great mouth, great legs, great singing voice ... and a great screen personality.

"In addition to what every obit seems to emphasize"

By which I meant, every obit except yours ... thankfully.

I really thought that Jane was one of those underrated actress. She was wonderful in all the films she ever made.