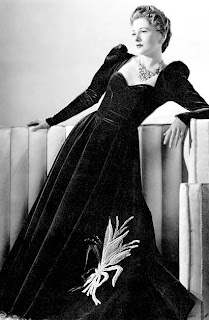 Today, Oct. 22, Joan Fontaine turns 90 years old. And this week the Siren intends to do her doggonedest to post as much as possible, and devote each post to Joan. There are precious few stars from the glory days of Hollywood who are still with us, and none are dearer to the Siren than Ms Fontaine. Can you guess why?

She was a delicate clinging vine in Gunga Din, one of the greatest of all 1930s action films. She was a teary-eyed, but still sympathetic "sheep" in The Women. She was Fred Astaire's first post-Ginger partner, in A Damsel in Distress. She was Hitchcock's first Hollywood blonde as the terrorized, given-name-less second Mrs. de Winter in Rebecca, the role Ms Fontaine believes most likely to keep her name alive with the public. She won an Oscar with her second film for Hitchcock, Suspicion, beating a roster that included her own sister, Olivia de Havilland. She was nominated for another Oscar for The Constant Nymph. She was the title heroine in Jane Eyre, opposite Orson Welles in one of his few outings as a romantic lead.

Any of this would merit a good long post from any classic movie lover, but for the Siren one reason towers above all. Joan Fontaine didn't merely give her finest performance in Letter from an Unknown Woman, which the Siren firmly believes is the greatest woman's picture of all time. Ms Fontaine also selected the Stefan Zweig story, developed the project with her then-husband William Dozier and was instrumental in hiring the great Max Ophuls to direct.

It just doesn't get much more impressive than that. If there were any justice in the world, they'd be altering the lights on the Empire State Building today for Ms Fontaine. As it is, maybe she is catching up with some of her lesser-known films on Turner Classic Movies today. As of now, the Siren plans to spend the week going through Ms Fontaine's career more or less chronologically, winding up with some thoughts on Letter. If you have the time or can get to your Tivo, do try to catch some of TCM's offerings. The Siren saw Until They Sail a while back, and though Ms Fontaine is hard on it in her memoirs, she is pretty good in it. Unfortunately the Siren won't be able to see Born to Be Bad, but Nicholas Ray directed it and if anyone catches it please let us know what you think. Also, if anyone else posts birthday tributes, drop the Siren a line via email or comments and she will link it up.

The Siren treasures her one tiny personal connection to Ms Fontaine. According to IMDB, she now lives in Carmel, California, but in the early 1990s she still maintained at least a part-time residence in New York City. In those days the Siren's roommate, Bill, managed a chic, high-end costume jewelry boutique on the Upper East Side. This store specialized in pieces that echoed real jewels sold in the legendary stores a few blocks away on Fifth Avenue. The ladies who shopped there were the sort who could throw on a little cubic zirconia and have everyone assume it was the real deal--with none of the insurance risk from taking the genuine sparklers out of the vault. Bill waited on a number of breathtakingly famous women, including Jacqueline Kennedy Onassis and Imelda Marcos. (Imelda didn't actually speak to him, communicating instead through her companion, a Mrs. Batista--prompting the Siren to wonder forever afterward if New York is home to some sort of Ex-Dictators' Wives Club.)

Anyway, Bill's favorite client was Joan Fontaine. She came in several times a year, still beautiful, always dressed in perfect taste, always warm and courteous and always picking out his favorite pieces. The Siren yearned to dash uptown from her office job and catch a glimpse of Joan, but alas, the rent had to be paid, and the Siren's boss at the time had this dreary insistence on one's bodily presence throughout the working day. (And he never went to the movies. Boy, was the Siren glad when that gig ended.) Every time Bill came home and mentioned Ms Fontaine had been in the store the Siren almost chewed her arm off with jealousy. Finally she made him promise that the next time the lady dropped by, he would at least mention his worshipful roommate.

So some time later, in comes Joan, glamourous as ever. Bill waited until he was almost done wrapping her purchases, then finally remarked, "You know, Miss Fontaine, my roommate is a big admirer of yours." A polite murmur of "how nice" or something from Ms Fontaine. He ventured further. "And she asked me to tell you that her favorite movie of yours is Letter from an Unknown Woman."

At that, Bill said Ms Fontaine lifted her head and gave him the most dazzling smile he had ever seen from her.

What a terrific anecdote! You must have burst when he came home and told you that. I bet it still makes you smile like a Cheshire Cat everytime you think of it. Well done!

It did make me happy, but to this day I wish I had faked a sudden attack of gout or something and whisked uptown to gawk at her. I bet she would have been nice, no matter what kind of stammering fool I made of myself.

Hello sweet Siren!
I was so excited to read your lovely story... and as usual, have been jotting notes on more movies to pick up! I have been searching fo The Constant Nymph for a long time and cannot find it. =(
I am so happy she is celebrating her birthday. I was just wondering a few weeks ago if she and Olivia de Havilland were doing well. I like them both very much.

Hope you are well!

Hello dear Koneko! It was so wonderful to finally meet you in person. You are not the only one in search of The Constant Nymph--I was too, for the longest time. Some ghastly rights situation between the novel, play and movie has kept it out of view. IMDB has the alarming news that UCLA has a nitrate print but it isn't scheduled for preservation. I had despaired of ever seeing the movie but a kindly fellow blogger managed to slip me a copy and I plan to review it later this week. (Where he got it he did not divulge, and as they used to say in spy movies, it is safer not to know.)

I love that story. I've had a rough day and it gave me a welcome jolt of genuine happy.

Now if only someone would dig up Something to Live For out of the vault it's buried in. I'm looking forward to the future postings.

Wow, that's one of your best pieces. (And I so admire your grammatical ability to remain in the third-person.)

I've never given that much thought to Fontaine, beyond Rebecca. I can't wait to read your thoughts. Of course, don't overdo it. If you post all week this week, we'll never see you again til 2008. And you have, like Miss Fontaine, a loyal fan base!

I taped Born to Be Bad off TV something like a year ago and it's still waiting to be watched. I'll give it a shot sometime this week and report back.
I'm thinking I should probably give Letter from an Unknown Woman another shot too.

Stinkylulu, I am most glad to have helped out. ;)

Peter, there are a lot of her movies that are buried for reasons I don't understand.

JJ, I loved your What's My Line post and need to link to it.

Goran I watched the last 45 minutes of Born to Be Bad and you know what, it was a lot better than I had thought it would be. Robert Ryan, Nicholas Ray -- you know it won't be worthless.

I saw her once in person -at a book signing in the late 70's. It was her autobiography she was promoting - "No Bed of Roses" (love that title, so indicative of the latterday Fontaine vibe). I remember that she looked terrific - patrician but fresh as a -well, not a daisy - but something a lot more upmarket. With a beautiful complexion smooth and natural looking as a baby's. And I recall being amused at her ever-so-in-character remark that "No man helped me write this book!"
Onscreen 1944 is Fontaine's golden year for me. Kind of shimmeringly mousy in Fox's "Jane Eyre"- binding the whole swirling affair together with her impeccable gift for off-screen narration. Then traipsing over to Paramount to play the ultimate Restoration milady in "Frenchman's Creek", splendidly equal to the incredibly elaborate series of hats, wigs and gowns.It was Fontaine's ultimate glamour showcase; the rest of the picture's Technicolor splendors were really just there to accesorize her marvelously witty performance. And it all worked beautifully.

I love every film by Ohpuls I have seen so far, so I'll sign into the "Mine, too" club

Hi, Siren! Sorry to hijack the comments section of your Fontaine post, but I couldn't resist.

My grandfather was the commissioner of the tax bureau for Imelda once; in effect, he was her Tax Man. I'm not sure if he was responsible for her ostensible wealth (for one thing he had a rep for honesty (take that how you will, though his employees swore by him), and she had more direct ways of amassing riches (Joke: What's Imelda's favorite industry? Mining. "That's mine, and that's mine, and that's mine...")). I don't know if you know it, but one of her favorite trophies was George Hamilton; fact is, there used to be a T-shirt going around: MACOY, HINDI KA NAG-IISA (Macoy(Short for 'Marcos'), you are not alone!) with a picture of the president in front, and a picture of Hamilton in the back.

I saw her once, too, in a Spanish restaurant. Never met her, though my grandpa told me (always respectful) stories of her.

What a great story! And you can totally hear her exact delivery.