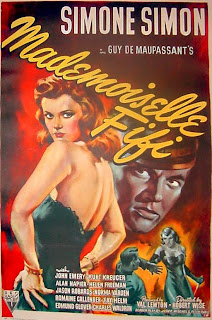 Mademoiselle Fifi doesn't get much love from various Internet critics, in French or in English, but the Siren enjoyed it. Perhaps that's because she saw it not as a Val Lewton mood piece, nor yet as a Resistance allegory, but as a woman's picture and a passable (albeit considerably cleaned-up) take on Guy de Maupassant, who happens to be one of the Siren's favorite French writers.*

The film combines the Maupassant short story "Mademoiselle Fifi" with his even more famous "Boule de Suif," which is generally thought to be the genesis of the tale that became Stagecoach. A coach filled with well-to-do passengers is making its way from Rouen to Dieppe just after the Franco-Prussian war. The one working-class passenger is Elizabeth de Rousset (Simone Simon), a "little laundress" as she is billed in the credits. That's one big divergence from Maupassant, as the original heroine is a large prostitute (hence Boule de Suif, literally ball of fat). During a stopover at an inn, the proudly patriotic Rousset is spotted by a Prussian officer, Lieutenant von Eyrick, nicknamed Mademoiselle Fifi. The officer asks her to "dine" with him. (As you can imagine, in the Frenchman's story he wants a wee bit more than that.) She refuses; he detains the coach. The passengers talk her into dining with him, then make it clear that they despise her for doing so. But the villainous Fifi hasn't done with our heroic laundress yet.

What's interesting in the film isn't the direction or the look of the thing. It's hard to believe Val Lewton and Robert Wise made the shimmering Curse of the Cat People that same year, and the pedestrian direction forms rather a good argument for Gunther von Fritsch's greater influence on Curse. Only a nighttime chase sequence near the end seems to have much of the visual sense of Lewton productions--darkness, echoing footsteps, the dread of what you are not seeing. That scene is also quite sexy in a suppressed, embrace-in-the-shadows way that the Siren identifies with Lewton. Otherwise the film has a rather standard period look, although that in itself is an accomplishment. In the documentary Val Lewton: The Man in the Shadows, Martin Scorsese notes dryly that Mademoiselle Fifi has the "dubious distinction" of being the cheapest period film ever made to that point. The Siren's sleuthing puts the budget at a minuscule $200,000. (The ever-great John McElwee has precise figures here at Greenbriar Picture Shows.) Despite the low budget, poor Mademoiselle Fifi still didn't turn a profit. But true to Lewton's ability to get visual bang for the buck, the movie doesn't look that cheap. The one "uh-oh" moment is a drive through snowy countryside that looks like exactly what it is--a California national park, about as French as a redwood forest.

Surprisingly for an era where mangled adaptations were more common than today, Mademoiselle Fifi adheres to Maupassant in many regards, even to keeping some dialogue almost word-for-word. Lewton was, by all accounts, a cultivated man with a high regard for literature, and the screenwriters Josef Mischel and Peter Ruric treated the stories with respect. Aside from the changes mentioned above, the character of the bogus revolutionary Cordunet (John Emery) is made sympathetic, turned into a love interest capable of being inspired by Elizabeth's heroism. But many Maupassant moments fit nicely into a World War II anti-Nazi allegory. There's the scene, for example, where the Germans fill a teapot with gunpowder for the childish, barbaric enjoyment of blowing a beautiful room's interior to smithereens. That's straight out of the original "Mademoiselle Fifi," with a Hollywood line to whack us all with the symbolism: put enough powder in "to destroy the furnishings, and leave us the room," orders Fifi. Despite his character's ludicrous nickname, Kurt Kreuger, the chiseled blond who pops up in many a 1940s Nazi movie, poses more of a threat than Maupassant's short, effeminate officer, and the movie gives him a psychopathic sidekick for good measure.

The movie retains the anti-bourgeois bite of the short stories, in part by adding lines to make sure no one could miss the point. "Rich people don't seem to like little laundresses, or liberals," observes Cordunet early on, when he and Elizabeth are being snubbed by the other passsengers. Elizabeth understands: "At the laundry they always said it was much harder for the rich to be patriotic." One wonders how this screenplay escaped HUAC's notice later on, since the dialogue's at least as revolutionary as Tender Comrade. One Maupassant touch, however, didn't survive: his anti-clericalism. The hypocritical nuns of "Boule de Suif" are jettisoned, their place in the coach taken by the sympathetic priest from "Mademoiselle Fifi." And in the latter story, the heroic prostitute is a Jew, something the screenwriters also eliminated. Given what the world already knew in 1944, the Siren wonders why that aspect was scrubbed.

So, we have comparatively unexciting visuals and a Resistance melodrama plot. What, other than her delight at finding favorite bits of Maupassant still in the film, made the Siren like this movie? It's the same thing that makes her like Lewton's movies in general--not just the atmosphere of dread and suspense, but the complex, dynamic treatment of women. A Lewton film fleshes out its heroine in distress. She doesn't simper in one scene, scream in the next. She is an active agent of her own fate, for good or ill, whether trying to bring back the wife of the man she loves, clean up an insane asylum, escape an ancient curse, or even, as in The Seventh Victim, avidly pursue evil itself. 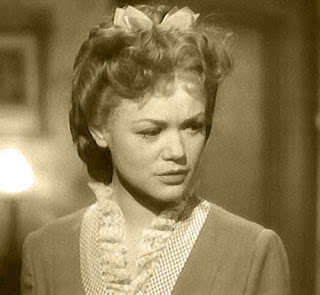 Simone Simon as Elizabeth embodies this quality well. She is by far the most principled character in the movie, and she comes into peril only when she allows weaker people to gain influence. In movies, as across cultures and centuries, a woman's chastity is drafted into maintaining the purity of all sorts of things that really should take care of themselves--country, race, family. In Mademoiselle Fifi, yes, the heroine stands in for France. She's her own woman for all that, resisting the onrushing allegory even as she resists the leering von Eyrick. She's dealt one blow after another, but picks herself up each time, principles intact. "I don't eat with Prussians," she says proudly, and instead of seeming ridiculous or petty, it is a declaration of human rights.

The first time Simon dines with Kreuger, his object isn't so much to seduce her as to humble her. He forces her to kiss him, then blows a plume of cigar smoke into her mouth. Simon's expression--mingled humiliation, pain and fury--renders the moment as close to an explicit sexual assault as 1944 ever got. "What I think of you matters very little. What I want you to think of yourself matters a great deal," he tells her. This rather moustache-twirling line, which isn't in the stories, still sums up the tenor of the movie. Of course we're supposed to think of the pride of the French people, but it's the pride of the laundress the Siren was caring about, at that moment and later. Toward the end, at another dinner, Fifi forces another kiss and bites Elizabeth so hard she gets a streak of blood on her mouth. The camera stays where it is, in a two-shot on her and Kreuger, which underlines the brutality--no way to read it except as the rape of a virgin. But Simon's expression this time is different, there is a cold deadly fury to it. What follows a few moments later comes as little surprise.

Mademoiselle Fifi isn't available on Region 1 DVD, but there is a French edition of it. The Siren thinks it deserves another chance. While the film won't satiate a hunger for Lewton's particular brand of atmospheric menace, it offers a window into his careful regard for literature and for women.

(This post is a belated offering for Michael Guillen's Val Lewton blogathon over at The Evening Class. Please stop by there and check the links--the blogathon has brightened the Siren's week.)

*You can read her all-time favorite, "Useless Beauty," right here. The Siren finds that one quite cinematic and wonders why no one has filmed it. "Mademoiselle Fifi" and "Boule de Suif" are also available online.
Posted by The Siren at 11:47 AM

Robert Wise told me in an interview that Simone Simon kept lobbying to have Wise replaced by her boyfriend - Max Ophuls!

Wise's version of Mademoiselle Fifi is a good film, but I can't help thinking that with Ophuls behind the camera it might've been great.

What a fantastic story. One of the reviews I linked to also makes the very accurate point that this is begging for Ophuls, it has all his earmarks. Plus, of course Ophuls made the very greatest of all Maupassant adaptations, Le Plaisir.

but, an aside -- naughty Max! wasn't he married? But Simon was one sexy kitty in those days.

Your support of the Lewton blogathon has meant so much to me, Siren; thanks a million!

I am really glad you were able to add my contribution to the links, and I appreciate it. It was a good opportunity to look at this producer auteur again. I like Lewton movies but oddly, I haven't done much reading, writing or even deep thinking about them, so this was a good exercise for me.

That's clearly the value of the blogathons; they provide that little bit of extra incentive. I'm not always free to participate, and it's nearly impossible anyways with the amount of blogathons running out there these days, but, I remain grateful that you came to my party and please let me know if you throw one too!

Campaspe, Along with Youth Runs Wild, this is one of the few 40s Lewton films I haven't seen. Many thanks for linking me to the treasure trove that is the Lewton script site.

I just watched this last night and found it had a very similar ring to Jean Renoir's La Marseillaise in its call for a fighting spirit. I find WWII-era movies so interesting in this regard. Thanks for giving it an airing.