This Week's Odds and Ends 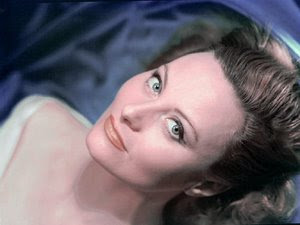 Last night Michèle Morgan was on TCM in Higher and Higher, and had the Siren not already seen the star in things like René Clair's deliciously romantic Les Grandes Manoeuvres and The Fallen Idol she might never have wanted to hear of Morgan again. Having seen what Morgan could do with a good script, the Siren can only conclude that when the actress was assigned Higher and Higher she just said there was no putting any rouge à lèvres on this cochon. Despite a couple of cute scenes the movie is a stinker, and Frank Sinatra, here in his first full role, at this time was so bad an actor he couldn't even play himself. The Siren would not be mentioning the movie at all if it weren't for wanting to bump the picture of Joseph Breen down the page a bit. Michèle is much easier on the eyes, yes?
In an interview in the 1960s Morgan confessed that she had always wanted to be a great international star and her failure to make it in Hollywood was a disappointment. But to anyone who's seen Quai des Brumes, a great star is what she always will be. Morgan was a Leap Year baby, born Feb. 29, 1920, and is still alive and well and even attended the Césars a couple of years back when her companion of fifty years, the late director Gérard Oury, was honored. The Siren salutes her.

The Siren was dealt a cruel blow last week when Flickhead decided to close up his blog. His support and encouragement in the early days of the Siren's blog meant more than he probably knows. Ray is the reason the Siren keeps renting movie after movie by Claude Chabrol. Flickhead is a wonderful writer and he will continue to maintain his larger site, so all is not lost.
And Matt Zoller Seitz, a critic for whom no praise is adequate, has also decided to quit the blogosphere as well, to pursue filmmaking. While we can ill afford to lose good critics, there is perhaps an even greater dearth of intelligent, witty and compassionate directors, so the Siren finds comfort here too. And the House Next Door is now in the good care of Keith Uhlich, so that site will continue to be indispensable. Keith has just inaugurated a regular Monday column, so there is that to look forward to as well.
Finally, Marilyn of Ferdy on Film is running the Invitation to the Dance blogathon this week. Has there ever been a more enchanting topic? As she is for most invitations ever since the twins were born half a decade ago, the Siren is running late. But she's gobbling up the entries in this one, so take a look.
Posted by The Siren at 10:32 AM

Oui, Morgan is better than Breen. But then, I miss Vera Zorina...

Thank you for the kind and considerate mention, Siren.

At the very least, the closing of my blog prompted a mention by Dave Kehr on his blog, and yielded an offer from an editor/publisher to write reviews for a hardcopy magazine. (Details to follow if and when that happens.)

As for Michèle Morgan, she made a brief but touching appearance in Tornatore's Stanno tutti bene (Everybody's Fine, 1990). If one isn't too hardened or cynical, this Felliniesque odyssey -- starring Marcello, no less -- can be rewarding. At 70, Michèle was still quite an eyeful.

By the way, did you ever get around to renting À double tour?

But Surly, I gave you Greta! in my second-favorite picture of her! in my favorite Garbo movie! Whaddya want from me?

Flickhead, A double tour is on my Netflix which I am constantly reshuffling. I am crossing my fingers for the magazine gig and I hope you let us know! Meanwhile I am perusing your new blog, not that I am sulking over having to learn of it in someone else's comments. No sirree. (makes discreet moue)

I love it when you moue!

I watched about half of this the other night when it was on but had to take care of homework and bedtime chores with the kids so I didn't see the end but I was amazed by how lifeless Sinatra was in the scene I saw him in (where he pops in and sings the song at the piano).

From what little I saw (about thirty minutes) the problem seemed to be casting more than anything else. Not that the screenplay was great or anything but Jack Haley just seemed wrong for a wisecracking part. There's something about his voice and style that just didn't work for me (full confession: outside of the Tin Man Jack Haley doesn't work for me in anything). I did like Mary Wicke, with what little she was given. And Michelle Morgan was nice to look but her timing was off. In fact, everyone's timing seemed off (even Mary Wicke to a degree and she was an expert at it) so maybe beyond casting the real problems came with the director on the set and the editor in the cutting room.

I can't believe I just gave that much thought to "Higher and Higher." Must be your Siren call.

And Flickhead: the closing of my blog ... yielded an offer from an editor/publisher to write reviews for a hardcopy magazine. Hmmm... Cinema Styles closes today everybody. All posts half-price. Get 'em while they last.

I am always tickled when I find out somebody was watching TCM at the same time I was. I want to argue with you about Jack Haley but realize I can't because I don't remember him in much. Trotting over to IMDB reminds me that I liked him in Rebecca of Sunnybrook Farm, Alexander's Ragtime Band and Moon Over Miami. He was actually just about the only thing I liked in the movie; he's a warm and genial presence although I guess I can't argue that he's particularly memorable, aside from that one immortal part.

The one scene that did make me and Mr. C laugh was at the butler's ball when Morgan is giving a speech and starts to absent-mindedly polish the banister. It was cute. But overall Sinatra must have been glad when MGM bought his contract.

I kept reading the first part of your comment as "ticked" instead of "tickled" and couldn't figure out why my watching TCM when you were would have upset you. Then on about the third read my brain finally read "tickled" correctly.

I think Haley's voice has always bothered me for whatever reason. I don't deny he has a genial presence (probably why the wisecracks didn't register) and I don't dislike him, he just doesn't work for me and maybe it is because he is burned onto my brain as the Tin Man. Of course, I've never had the same problem with Ray Bolger, Bert Lahr, Frank Morgan, Margaret Hamilton or Judy Garland so I guess Haley and I simply don't connect.

And there's always a good chance I'll be watching TCM around the same time as someone else as it's about the only channel that gets used on our tv. That and the input channel for watching DVDs.

Maybe I should be answering the Siren's question in the other post, but I do recommend Simon Callow's biography of Welles. I hope he doesn't take ten more years to finish what was originally intended to be in two parts. Callow is able to give a much fuller picture of Welles, and though Welles is held responsible to a good extent for undoing his own career as a filmmaker, Callow is able to put in context, letting us know what Welles was doing at the time. The only other biography I read was David Thomson's. Callow's is also useful in supplementing what was shown and stated in the documentary It's All True, about Welles in Brazil.

I'm not familiar enough to comment on the Flickhead decision.

Yes, Matt Zoller Seitz' decision was a bit of shock--especially to those of us here in Dallas who remember his work from the pre-Net days--but given recent events in his personal life, it was all too understandable.

And the written reason he gave for his decision was a lot more eloquent than I expected.

As was your response.