Anecdote of the Week 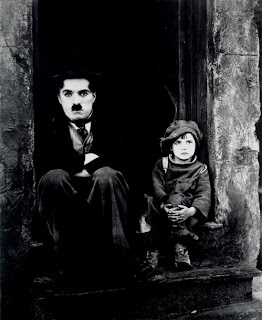 Oy, quite the week chez Campaspe. Mr. C is in Australia on business. Periodically he calls to tell the Siren how great the weather is. Things here in Brooklyn are hot, humid and rather frantic, as the Siren tries to come up with a New York blog post in time for the Derelict's blogathon.

For some reason, all week the Siren has had Charlie Chaplin on the brain. Perhaps it is because she is child-wrangling by her lonesome. Chaplin was beloved by children around the world for such a long time. Do they still love him, if you show them the movies? Or is his art too faraway and antique now? The Siren plans to find out, soon.

Meanwhile, I couldn't stop thinking about this passage, from Griffith and Mayer's The Movies, and I had to share.

They were dreadfully poor. Charlie's parents were third-string strolling players. His father died early of alcoholism; his mother was often in asylums, whether through drink or because of periodic mental illness. Whenever this happened, Charlie and his brothers had to shift for themselves on the streets of London. Robert Flaherty used to tell the story of one of these times: 'It was a rainy winter night. Charlie, who was about eleven, had no place to sleep and was sheltering under an overhanging roof. A solid-looking man came by, took a look at the boy, and asked him what he was doing there. Charlie told his story. The man stroked his chin for a moment and said, "Well, I've a bit to eat at my place. I've only one room, but you're welcome to stay the night if you don't mind sleeping on the floor." They went to the man's furnished room, where Charlie slept on a pallet at the foot of his host's bed. Next morning when he woke, the man had gone, but Charlie found a note saying, "If you've no place to sleep tonight, come here." Charlie had to avail himself of his friend's help for many nights, but always in the morning the man had gone to his work. Charlie became curious about what that work might be. One morning he managed to wake early. The man was taking out of the closet and measuring in his hands a long, strong rope with a noose at the end of it. He was the common hangman.'

Out of such experiences came the greatest comedian in the world.

This is powerful. Thank you for sharing it. Much of Chaplin's best comedy came from its acknowledgment of the nearness of horror and grief. Sometimes that made him maudlin, too: there's a lot of Chaplin I pull away from, preferring the hardness of Keaton. But at his best Chaplin could remind us of loss and despair, then find the absurdity and humanity that made them comic and survivable. This story about the innocent discovering the man who's putting him up could easily be a Little Tramp routine--and he would have gotten a great laugh out of the moment when the Tramp saw the hangman take his noose out of the closet.

My gosh. What an amazing anecdote.

And an aside: my 9 year old nephew informed me once, out of the blue, point-blank, "I prefer Buster Keaton to Charlie Chaplin." It's so hard not to laugh sometimes when kids say something so seriously - but I loved that he would have enough familiarity with both artists to have a preference. I asked him why he liked Keaton better, and he said, "Because his face is always like this", and he mimicked Keaton's poker face, and then collapsed into hysterical giggles just thinking about it. Love it! We've had some great chats about both actors!

Gerard, all that had struck me was the horror of this for such a young boy, but you're absolutely right, Chaplin could have made it funny. There are a great many terrible things going on in just about any Chaplin comedy. I seldom find him maudlin--rather, Victorian at times, showing us human emotions with a flourish. Certainly only Dickens could have done justice to Chaplin's childhood. He was a difficult man in many ways but when you read of Chaplin's youth you can only marvel that his genius ever flowered at all, rather than his circumstances leading him into organized crime or serial killing or multiple addictions.

Sheila, I find that very encouraging. The twins are 5 and maybe still a wee bit young but I might try one of his shorts. I always found him funny as a kid; children adore physical comedy.

I took my son to a lot of silent movies when he was younger (7-12, say--he's less interested at 15) and he never really took to Chaplin. He seemed somewhat unnerved by Chaplin's essential sadness. He liked Keaton more, although it appears he wanted more out of the character. But he LOVED Harold Lloyd. The silly excesses of emotion and explosive optimism really spoke to him in middle childhood.

One of the greatest time I ever had watching a movie was when I showed a dusty videocassette of the Circus to my class of 6th-graders while teaching ESL in Thailand- not only did they laugh and laugh and love the film, but it provided material they were eager to talk about (in English, natch) for weeks afterward.

San Francisco filmmaker Jay Rosenblatt captured his daughter's Chaplin obsession in a lovely short film. I don't know how available it is to view.

Gerard, I think they might be a touch young but I want the twins to see some silent comedy at a young age before all the lush visuals of current kids' fare make it harder for them to watch anything that old.

Brian, what a wonderful memory. It reminds me a bit of "I've Got Rhythm" in An American in Paris, such a wonderful, fresh musical number -- I love the delighted cries of "Charlot!" when Kelly goes into his Tramp imitation. Thanks very much for the Rosenblatt link too.

"Certainly only Dickens could have done justice to Chaplin's childhood."

I was going to say that Dickensian would be my description of his sensibiity. But there yo've already said it...

I have difficulty with the mannered style his pictures inherited from the stage via the early silents. In a lot of ways it is like reading 19th Century authors; I'm too accustomed to the terse rhythms of the 20th Century. But the guy was brilliant, and it shows. When you think of it, how much of the "tortured artist" cliche' is because a background of comfortable ease doesn't produce a whole lot of the sort of furious drive and self-awareness that produces both great art or great crime...?

FDChief, I'm thinking what I need to do is re-view some of Chaplin's earlier movies. I always think of him as fresher and less maudlin than, say, Griffith, despite Griffith's undoubted genius as well. But then, you are talking to a woman whose last big fiction read was "Pendennis" so the 19th century mindset doesn't both me.

One of the things I find extraordinary about Chaplin is the way that he was, for a period, a universally popular performer wherever his films were shown, at least from everything I've read. For instance, I was reading a research paper by an anthropologist working in Nigeria, who set out essentially to debunk notions of African credulity when it came to the movies. He said that the audience reaction to Chaplin films there was exactly the same as in Britain during his own childhood - laughter at the same moments, identification with the characters in the same way. I'm curious to hear, in due course, what your children think: when I was that age - c. 1978 - Chaplin shorts would crop up fairly regularly on TV at the weekend (Irish TV, I think, rather than British, though I'm not certain; we also LOVED all the Our Gang/Little Rascals shorts, of course...).

Every year I show my 4th grade drama students The Kid, and I get such a kick out of watching them grow totally absorbed by the story and the acting without words. Then they make their own pantomimed silent "movies" in response.

I love The Gold Rush; I love the first half of Modern Times; I absolutely adore City Lights. But then I see Sherlock Jr., and--well, there's room in my life for two absolute loves.

This weekend, I was in not-so-beautiful downtown Anaheim CA, at the Annual ALA conference (20,000 librarians converging in one place--scary).

Anyway, I went to panel on wordless books: Lynd Ward and Franz Masereel through Werner Gotheim and William Gropper to Peter Kuper and Thomas Ott. One of the panelists was an author of a wordless woodcut book himself, Eric Drooker, author of Flood! For his section, he did a slideshow (literally, with a carousel projector) of one chapter from the book, and he had a musical soundtrack to accompany it, essentially turning it into a kind of silent animated movie.

It was so powerful. It was universal--no need for any kind of translation. It was moving. It addressed social injustices (historically, many of these wordless books do). Anyone from a child to a senior citizen would have been able to follow it.

That's the beautiful thing about Chaplin films, especially, because he never needed to use words. I've always been so impressed at how huge an international star he became, with crowned heads lining up to meet him and every country coming up with their own nicknames for him. But it makes sense. There was nothing to stop him from becoming as big a star ANYWHERE else as he was in the US. He needed no words, and he touched deep into the core of humanity.

Not bad for a little tramp.