Anecdote of the Week: Barrymore's Blackboard 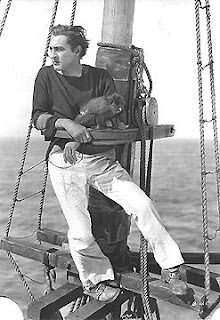 Fellow redhead Sheila O'Malley is never better than when she's got her Irish up, as she does over Peter Manso's Brando biography. James Wolcott already covered this one, but it bears another look. Sheila was particularly incensed by Manso's snide referrals to Brando's reliance on taped cue cards, as though the process somehow diminished the performance.

So this one is for the magnificent Sheila, and her superb collection of film books. May her series about them continue forever, or at least down to the very bottom shelf. This anecdote is from Garson Kanin's Hollywood, which is not the most unimpeachable of sources. In this case, however, the Siren catches a whiff of authenticity. See if you agree.

It's 1938, and Kanin is filming The Great Man Votes with John Barrymore, a star whose reliance on lines scrawled on blackboards owed more to a memory dented by years of diligent alcohol abuse than technique. How much Barrymore really needed them is anyone's guess--he could recite Shakespeare by the page even in the very depths of his binges--but insist upon them he always did. On this film Barrymore's "blackboard man" was named Henry, and Kanin came on set one day to find that Henry was about to mix it up big time with the principal gaffer.

The gaffer spoke. "Listen, I've put up with this goddamn pest every day since we started, but enough is enough. He doesn't have to be in here with that goddamn sliver. I need this spot for my key light and I want him the hell out of here."

Henry, a dignified old gentleman, said, "I know my job and I"m going to do it and no one's going to prevent me from doing it. My job."

I was confused. "What job? What do you mean 'sliver'"?

Henry held up a blackboard the size of a child's slate. On it was written the word "Yes."...

I went over to Barrymore...

"We have a little problem," I explained. "You know the scene. We're outside here with the camera. Miss [Katharine] Alexander knocks on the door. You open it. She says, 'Are you Gregory Vance?' You say 'Yes.' She walks in and that's it."

"Fine," said Barrymore. "What seems to be the trouble?"

"Well," I explained, "Henry here sems to feel that he has to be standing here with this little slate that says 'Yes.'"

"Oh by all means!" said Barrymore.

I did not grasp his meaning at once. "You mean it's all right for him not to be here. Is that it?"

I was losing patience, struggling for control. "But let's be reasonable, Mr. Barrymore. All she asks is, 'Are you Gregory Vance?' And you are, so what else could you possibly say?"

Barrymore thought for a long moment, then looked at me and said, "Well, I could say 'No,' and then where would you be?"

We found a spot for Henry and his slate.

*****
This week marks the start of a long-awaited vacation for la famille Campaspe. We'll be in France for three weeks, hence the banner change. The itinerary is Paris, then Normandy, then Paris again, then back home. I will have Internet access in Paris although Normandy is something of a question mark. In any event I have set up some posts via Blogger's spiffy new advance-post system, as well as my piece for Mike "Goatdog" Phillips's "Movies About Movies" blogathon. I will be checking in when possible but I hope you guys still chat amongst yourselves.
Posted by The Siren at 9:30 AM

Bon Voyage, oh Siren of the Seas.
Eat at the La Taverne du Sergent Recruteur, (Tavern of the Recruiting Sergeant) in Paris. I actually said "Sank Roo Doe Noo" to a cabbie there once, just like James Bond recommended, and ended up at Harry's Bar. Have a good time. Gee, I said that without a sliver to help.

Bon voyage, O Siren! You will be sorely missed. It is, of course, not just your posts that bring us here, but the delight of your dialogue with us in the comments.

And what a lovely parting present you've left us! Not just that dee-licious anecdote, but the smokin' photo of a young and robust Jack.

Bon viatge! right now I'm one stepaway from the French frontier myself:I may cross it to get some real Petit Suisses ;)

(Kanin's "Hollywood" can get quite agressive at times, can't it?)

Have a wonderful time in Paris, Campaspe! It's no San Diego, but it does have its charms...

Sometimes reading an anecdote about John Barrymore is more fun than watching one of his movies. This makes me want to watch "20th Century" again, with Jack furiously scrawling chalk lines on the stage floor...

Welcome in Paris ! The weather is so-so, but there are pleasant sights, as always, and interesting exhibitions. Don't miss the lovely Méliès at La cinémathèque, in itself something of a treat.

Have a good time. Hope you come to visit those of us stateside when you can, online. I'll let you and the rest of my readers know about any effects of the world visiting my town at the end of this month when Denver temporarily becomes Obamaland.

Oh man! I had a good laugh with that one about Barrymore's slate man.

By the way Siren, bon voyage!

Have a wonder time in France - don't chide them to much for not winning the swimming medley relay - well maybe a little. And so glad to see you will be posting either in real time or via blogger blog delay - 3 weeks with any post would, I believe, be considered cruel and unusual punishment for your loyal readers :-)

Have a great time. A bientot!