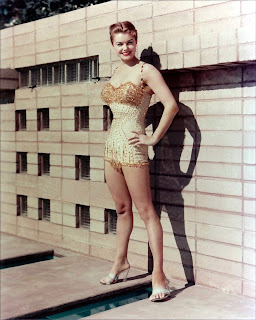 The Siren finds some genres slow going and the aquatic musicals of Esther Williams are definitely in that category. Williams was wonderfully pretty, had a smile that could power a small city and the best figure in Hollywood until Mitzi Gaynor came along to give her some competition. But the swimming and the posing underwater, even with a genius like Robert Alton or Busby Berkeley in charge, is only intermittently interesting to the Siren. And then the curiosity is usually clinical, such as how long did that take to rehearse? weren't those sequins awfully heavy in the water? is this the one where the crown on her head could have killed her?

Talk about a vanished aesthetic--there is really nothing around these days to compare with Williams and her movies. Then again, nowadays if you get a person who is famous for something nondramatic, and decide to make her a star, you plunk her into a reality show. As with just about everything else, the Siren prefers the old days. Skirts Ahoy! may not be The Magnificent Ambersons but it sure ain't The Girls Next Door, either. There were other non-acting celebrities that Hollywood gave the star treatment, notably Audie Murphy (a better actor than people give him credit for) and Sonja Henie (so, so, so much worse than you imagine--not even Tyrone Power can make her bearable). I like Take Me Out to the Ballgame, an enjoyable movie from Stanley Donen that Williams was utterly miserable making, due she says to ceaseless put-downs from both Donen and costar Gene Kelly. Nevertheless she's charming in it, and her singing voice was pretty good. Fiesta has its moments too. Williams and Ricardo Montalban were one hell of an eyeful (though they were playing brother and sister, alas).

But unlike some genres and directors that the Siren has given up on, she still watches Williams's water movies from time to time, largely due to the lady's delightful 1999 autobiography. Brutally honest about herself and others, Williams has intelligence, humor and self-deprecation to spare. Here she is, talking about the unique approach to the art of acting at MGM: 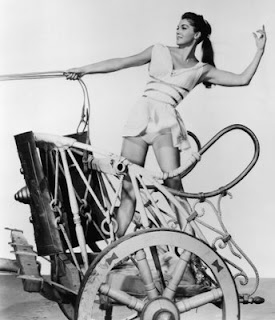 Lillian Burns was the drama coach, and she clearly made her mark on the leading ladies of MGM. Burns was a proponent of the one-size-fits-all school of acting. She was oblivious to the fact one might be taller, fatter, thinner, older, younger than she. When she left a room, she left in a huff. Up went her shoulders, up went her chin. Then she snapped her head back--you could almost hear it--and sailed out the door. We all learned the same mannered technique. Ava Gardner snapped her neck; so did Lana Turner and Jane Leigh. Even little Margaret O'Brien left a room that way. It's a wonder we all didn't end up at the chiropractor's.

Even though Lana Turner, Donna Reed, Debbie Reynolds, and Janet Leigh all swore by her, Lillian Burns and I were a mismatch. I knew instinctively that a five-foot-eight-inch girl could not behave like a feisty indignant little poodle with quick, jerky movements. Lillian's teaching consisted of reading chunks of dialogue in her style, which we were then expected to imitate, but her melodramatic incantations didn't work for me. I though I had avoided picking up most of her mannerism, but seven years of classes were bound to leave their mark. I remember watching Neptune's Daughter and when I saw my nostrils flare and my eyes pop out of my head, I thought, 'Oh Lillian, you sneaked those into my subconscious!'

On Aug. 8 she turned 87, and her swimwear line is still going strong. Ms. Williams, the Siren thinks you're fabulous, and the next time Dangerous When Wet comes on television I am by golly going to watch it.
Posted by The Siren at 10:24 AM

One of the most disturbing film-watching experiences of my life was when we recently attempted to show Bathing Beauty at my theater. The color in many old prints has faded to a sort of magenta, but in this print, it had faded to a tone that made it look like Williams was frolicking in a sea of blood. I couldn't inflict that on my patrons, so I had the distributor send a print of Million Dollar Mermaid instead; thankfully, the color was ok in that one.

Between EW in Neptune's Daughter and my birthday salute to Debra Paget, it's clear that that what the world needs more than ever is more women-in-togas movies.

I always considered Esther Williams' water numbers something agreeably spectacular... though it is true that they don't necessarily need a whole picture around: a series of short-feature watery extravaganza would have been OK for me.

As for...persons who are famous for something nondramatic, and working in films right now? Well, sometimes I feel modern-day films are full of them: they are called stunt people ;p

Peter, you should have seen Debra Paget in Lang's " The Indian Tomb", where she wears something more brief and bejewelled than a toga

Gloria: Yes, I've seen Lang's Indian films. Now all we need are Princess of the Nile and Cleopatra's Daughter on DVD.

By the way, in Rock-a-Bye Baby, there's a musical parody with a movie called "White Princess of the Nile". I'm sure Frank Tashlin was thinking of Debra Paget.

I loved those silly, glorious films of hers even before I read her fabulous autobiography (if Jeff Chandler hadn't already been on my Death is Not an Option list, he sure topped it by the time I got to the secret closet section). I remember how taken aback I was when I first saw her, by how pretty and talented she actually was--as you point out, there aren't a lot of athletes-turned-actors who carry that off.

I would have loved to have been in that audience in San Francisco (were you there, Gerard?), listening to her, live. She sounds so amazing.

At the height of the Reign of Breen, seeing Esther Williams in a swimsuit, underwater or otherwise, must have been about the raciest sight available to most men in the movie-going audience. Add to that her appealing personality and it's easy to see why she was so popular.

Out of the pool, Williams did respectable work in "The Unguarded Moment," directed by one Harry Keller, about whom I know nothing.

Strangely appealing premise, water dancing; only Esther pulled it off right. Criminally underutilized, and shamefully wasted - she had a face for film, a body to inspire all sorts of fantasies, and she could take direction quite well, so what the hell was wrong with the Studio heads? I see one of the things was the poor acting training she got - one of the reasons she might not've been such an easy plug-in lamp for the kind of movies women were supposed to do was indeed her height - she could never have been transformed into one of the midgets with big heads, strapping thing that she was, but I also get the impression she wasn't keen on being just another bimbo for them. She was one of the absolute best things about Technicolor, too - she generally glowed with some sort inner, self-directed 1,000 watt bulb, for my take at least. Besides, how can you resist Esther in a film called "Pagan Love Song"? As in that one, often she was the only reason to watch some of her films - Breen or no Breen, she projected sex in a way different from most. Van Johnson was one lucky guy, BTW.

Siren, dear Siren. Today was Babs Stanwyck day on TCM. Did you tape TEN CENTS A DANCE. I just saw it and it was amazing, so I wrote about it on Bright Lights. It rocked. Babs rulez!

oh yeah, and Esther Williams... hmm. Loved the passage you quoted... and I have a soft spot for TAKE ME OUT TO THE BALLGAME, but I have a feeling I'd need to be pretty anesthetized to appreciate one of her water ballet features.

Esther is one great example of how Life is something that happens to you when you're making other plans. Acording to the same bio (Million Dollar Mermaid) she was a terrific conventional swimmer in her youth, but too young for the 1936 Olympics. She was in training to swim sprint races (100 meter freestyle, her AAU title) when the 1940 games were cancelled.

No war, Esther becomes an Olympic medalist, maybe moves from there into coaching at UCLA or USC...here's no "Dangerous When Wet". Hmmmm...

I have to agree that Esther's charm is her athletic sexiness. At a time when most movie sexuality was steamy boudoir innuendo, Esther made you think of a simple, happy afternoon romp amid the towels by the pool, all sun and the tang of chlorine.

One of her other winning ways was her willingness to expose herself as a pretty self-centered bee-yotch. She comes off looking less than a perfect Hollywood idol in her bio; she more or less admits straight up that the crapped on her kids so her third marriage (Lamas) would work, confesses to getting involved with a number of men because they were good in bed but nowhere else; she seems to have a sense of herself as flawed person. Good swimmer, fair actress, good wife, rotten mom...she had a good run and made her own way. Good on her. Hope you're enjoying the end of a hell of a life, Es.

I probably amuse easily but I thought this was a hilarious book title.

Peter - I must amuse easily too because I think that title is hilarious. I purposely did not read what it's about. I don't want to know, it might spoil the title for me.

Harry Keller directed a couple of scenes in Touch of Evil with Leigh and Heston for "continuity" on orders from the studio.

But as for Ms. Williams--I watched all her movies as a kid, yet I'm still not sure exactly why. I know water ballets don't do a whole lot for me. In fact, they make me sleepy. This is not an original idea, but movies in water have a kind of lulling effect.

Yet, I think I watched them all on L.A.'s Channel 11 afternoon movie....Of course, I was a weird kid.