Rising Above the Times 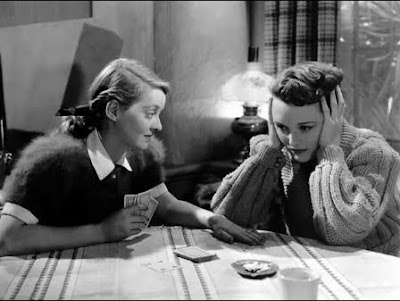 Manohla Dargis is a good writer and a fine critic. The Siren wants to get that out front where it belongs. That is why the Siren was disturbed to open her New York Times this morning and read this passage in Ms. Dargis's review of Amelia:

Romance is in the air in “Amelia,” or at least in the score, which works hard to inject some emotional coloring into the proceedings. The music screams (sobs) 1940s big-screen melodramatic excess and beautiful suffering.

Alas, excesses of any pleasurable kind are absent from this exasperatingly dull production.

The Siren hasn't seen Amelia so she has no Pomeranian in that fight. Her beef is the same she expressed somewhat less forcefully here. It distresses the Siren no end to see a comparison to 1940s melodrama used as a perjorative, even when those films are faintly praised in the next sentence as pleasurably excessive.

Please, Ms. Dargis, please. Each time you do that from your perch atop 8th Avenue, you contribute to most people's notion that old black-and-white movies are fusty relics, enjoyable mostly as camp. Your excellent prose style no doubt has many other equivalents for "cheap sentiment." The Siren asks you, politely but as firmly as she knows how, to cease and desist.

This is the second offense; the Siren devoutly hopes there will not be a third. Otherwise, like Peter Lawford in Cluny Brown, "I won't relax. I'm going to write another letter to the Times."
Posted by The Siren at 10:16 AM 119 comments: 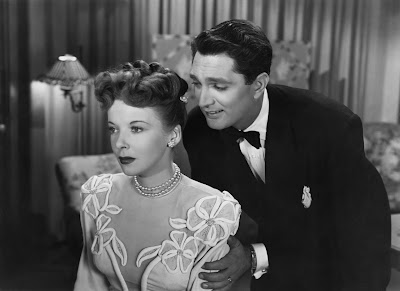 Since the Siren recently dissed another Ida Lupino movie in a big way, it is only fair that she make amends and write up the lovable, unclassifiable The Man I Love. The Siren has no idea what Warner Brothers, via the great Raoul Walsh, was trying to make here--it's noir, it's a musical, it's a women's picture and a romantic melodrama, with bits of The Best Years of Our Lives and Casablanca. Given this all-over-everywhere genre mashup, the Siren was agog at Walsh's superb control of tone. Not once does the movie stall while the gears shift. You hand yourself over to the master and get lost in the characters, particularly Lupino's Petey, a woman the Siren instantly took to heart.

Petey, as she's called without explanation, has just had a romance go bust. Fed up with New York, she leaves for the West Coast to celebrate Christmas with her siblings, her parents being long dead. The folks in Long Beach all have their own problems, however, so Petey's attempt to recharge just throws her in another tar pit. Next we meet her sister, Sally (Andrea King), working at a diner and fending off nightclub owner Nick (Robert Alda, sleazily handsome and quite good). Soon Petey is performing at Nick's club and gets involved with him herself, until she meets up with a morose but gifted piano player, San, and falls in love with him. Meanwhile Petey has to sort out not only her own family, but even the troubled couple across the hall. 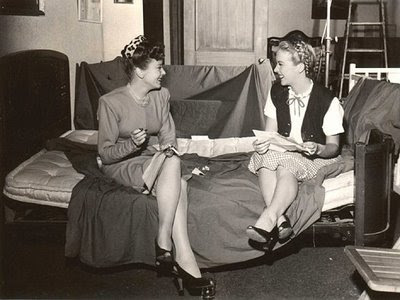 Despite a fine cast overall, in terms of acting it's Lupino's picture. Petey may seem like a tough one, but she's too much the caretaker for true toughness, and falling for an unattainable artist isn't usually the hallmark of a true me-first broad. Her toughness is mostly mental clarity. Petey sees things the way they are, doesn't lie to anyone about it and most importantly doesn't lie to herself. This is a dame who would never, but never cheat at solitaire.

Petey's common sense adds to her isolation; no one else in this movie has a clue. Nick thinks he can get Petey. San loves the wife who dumped him. Sally can't figure out what's going on with her shell-shocked, hospitalized husband (Jon Ridgely). Petey's brother Joey (Warren Douglas) thinks he's a tough guy. Their other sister, Ginny (Martha Vickers), loves her married neighbor Johnny (Don McGuire). Johnny thinks his trampy wife Gloria (Dolores Moran) is a nice girl, and Gloria thinks she's going to be Peggy Hopkins Joyce if only she can get somebody to babysit long enough. (Gloria and Johnny have twin boys and since she has twins herself, the Siren was paralyzed with amusement over the movie's breezy attitude toward double-baby duty--Sally and Ginny volunteer for baby-watching practically every day, but alas, sane people in the real world do not.) Petey keeps a gimlet eye on all this, dispensing advice and cleaning up when the advice isn't taken. The Siren's favorite line in the picture comes when Petey wonders why Sally bothers covering for Gloria: "She wouldn't give you the time of day if she had two watches." But Petey is never cruel, and she's generous; she will give you the hat right off her head, even if it matches her jacket. 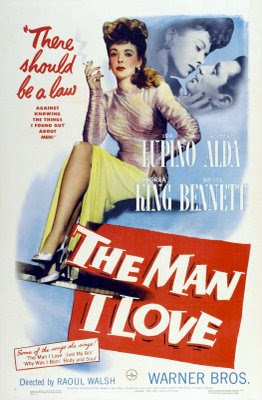 Over at Glenn Kenny's place there was recently a brief reference to the concept of "invisible editing;" The Man I Love has it, but it also has beautifully subtle and unobtrusive direction. Walsh could do a virtuoso battle scene, but he could make faces equally thrilling. Much of the movie consists of people talking to each other, and Walsh shoots these scenes with depth and intimacy, trusting his actors and the snappy dialogue to hold the audience. In scenes with multiple actors--clubs, a diner, Sally's apartment with its foot traffic to rival Penn Station--the Siren was lost in admiring how Walsh could foreground the people talking so that you don't miss them, and yet draw your attention to something in the background, often with the slightest of camera movements or no movement at all. Walsh can do it all just with a choice of angle. When he shoots Sally visiting her traumatized husband in the hospital, Walsh never once pulls back to show the guy's whole room; instead we stay tightly perched on or near the edge of his bed, conveying the man's isolation and narrowed focus. The director will stay in a medium shot and let you savor the bits of business that signal the characters--Gloria popping out of her apartment to admire a Christmas tree with a cigarette in one hand and a half-empty baby bottle in the other, or Joey, the ne'er-do-well younger brother, showing up moments later with a nattily folded pocket hanky and a bowtie he wants fixed, swinging his hat and not caring one bit he's about to bail on the family on Christmas Eve.

A while back, during the discussion of The Verdict, we talked a bit about musical numbers in non-musical films. Now the Siren confesses she loves the surreal way a song or dance can pop up in a studio film, while everyone claps and smiles and the plot goes off into a corner to smoke a cigarette and bide its time. (James Wolcott recently drew the Siren's attention to a superb example of this, from The Fastest Gun Alive.) Walsh manages here to have it both ways; the songs in The Man I Love are diegetic, but they always advance the story and theme.

The director shows great respect for the musicians and singers that populate these scenes. The Man I Love opens with two drunks trying to get into a club, lured by the music they can hear inside. No dice, the musicians inside are playing for their own pleasure, a nice setup for a picture that savors its characters' love of music. The camera goes from musician to musician, but it isn't just a tease while we wait for the star to show up; the men are talented, they're a pleasure to hear and one by one, each gets a beautiful shot. You hear Lupino singing the title song before the camera even finds her (she's dubbed, but the voice sounds like what the real Lupino sounds like, only better). And when the camera finally lights on her, you see Petey's regard for the musicians and how it's reciprocated just in the way Lupino, while she's singing, leans over the piano to light the player's cigarette with the tip of her own.

Even Sally tenderly listening to "Silent Night" on the radio--and Gloria flinging her fox fur around and whining that she wants some dance music--connects the ability to respond to music with the ability to feel. Nick, the ruthless nightclub owner, spends his life around music and recognizes what is good, but his only thought is to put a price tag on it. Petey and Nick go into a bar on the beach and listens to a great band playing "If I Could Be With You." The venal Nick starts scheming about how to hire away the band, while Petey ignores him to connect with the song. 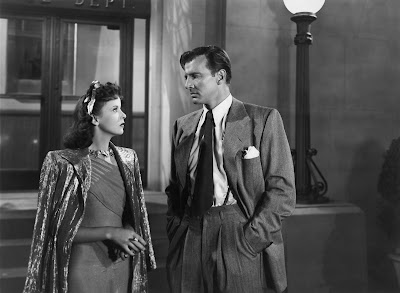 The Siren knew Bruce Bennett, who plays San, mostly from Mildred Pierce and his small but pivotal part in The Treasure of the Sierra Madre. He didn't have a lot of charisma but he had great melancholy appeal, wearing his depression like a well-broken-in fedora. This former Olympian was as tall as Gary Cooper, he sounded like Cooper but he doesn't much look like Cooper unless you scoot way back from the screen, squint and imagine that somebody just beat the shit out of him. In the hands of a different director and star it might be hard to sell Petey's fascination with this big lug, even though Lupino acknowledges the problem by calling him "you big lug" at one point, but sell it they do. Walsh gives Bennett a long moment at the piano, playing the title song, and keeps the camera focused on Lupino's face, so the erotic fascination she has for Gershwin seems naturally to spill over to the man playing the piece so well. Walsh's camera lingers over the couple and dares you to think that the music, and their deep emotional stake in it, is anything other than the very foundation of the film.

More on The Man I Love at Film Noir of the Week.

Anecdote of the Week: Joan and the One Man 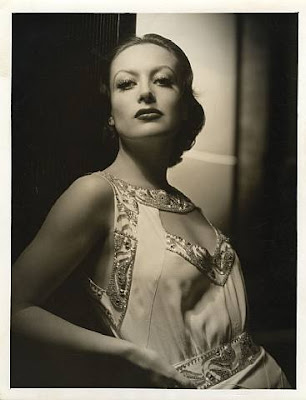 Every woman tells me there was only the One Man she ever really loved. Joan Crawford told me once that the only man she really loved was the rather dull, middle-aged vice-president of a soda-pop company and when I reminded her she'd said this to me about Douglas Fairbanks Jr. and Clark Gable and Greg Bautzer she looked incredulous. Then she said quite simply, "There is always only one though, isn't there?" And told me. It wasn't the vice-president.

Blogger Larry Aydlette, aka That Little Round-Headed Boy, whom the Siren loves despite his refusal to archive his wonderful blogs, posts a good guess as to Joan's One Man.
Posted by The Siren at 9:31 AM 31 comments: