For the Love of Film: The Film Preservation Blogathon

The Siren's blog is approaching its fifth anniversary, and to borrow a line from the best, "things are looking up." The TCM Shadows of Russia series starts tonight, on Tuesday the Siren will appear at the august Brooklyn Academy of Music for a screening of Mission to Moscow, and traffic to her little corner of the Web is up. Time, says the Siren, to celebrate. Time, what is more, to give back some of this good fortune.

So as we swing into 2010, the Siren is doing something she never has before. She's asking you for money.

Not for herself, but for what brings people to this site and many, many great film blogs around the Web. 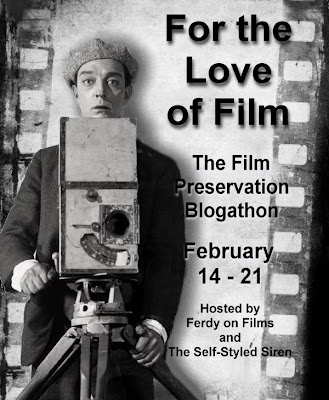 The Siren unpins her Lilly Daché hat and passes it around in hopes that you will donate to film preservation.

Together with the fabulous Marilyn Ferdinand of Ferdy on Films, from Feb. 14 to 21, 2010, the Siren will host For the Love of Film, a fundraising blogathon, with proceeds to go to the National Film Preservation Foundation. Here is the NFPF's mission statement:

The National Film Preservation Foundation is the independent, nonprofit organization created by the U.S. Congress to help save America’s film heritage. Growing from a national planning effort led by the Library of Congress, the NFPF began operations in 1997. We work directly with archives to rescue endangered films that will not survive without public support.

The NFPF raises money, awards grants, and organizes cooperative projects that enable archives, libraries, museums, historical societies, and universities to work together to save American films. Since opening our doors, we have helped preserve more than 1,560 films and assisted organizations in 48 states, the District of Columbia, and Puerto Rico. In 2009, we partnered with the National Film and Sound Archive of Australia to preserve and make available on the Internet several American silent films that no longer survived in the United States; another such project will be announced later in 2010.

And here, also from the NFPF, is what is at stake.

A two-year study prepared by the Library's National Film Preservation Board documented that American films are disintegrating faster than archives can save them. The types of motion pictures most at-risk are documentaries, silent-era films, avant-garde works, ethnic films, newsreels, home movies, and independent works. These are not Hollywood sound features belonging to the film studios, but 'orphans' that fall outside the scope of commercial preservation programs and exist as one-of-a-kind copies in archives, libraries, museums, and historical societies.

According to estimates, at least 50 percent of all films made for public exhibition before 1951 have been lost. Move into the silent era, and the estimate shoots up to 85­-90 percent. The nitrate film on which nondigital movies are recorded is flammable and highly susceptible to deterioration. All or parts of thousands of films have burned up, broken down, or ended up in a dumpster.

We hope that as many bloggers as possible will contribute a preservation-related post during the week of the blogathon, and we also hope all our readers will find it in their hearts and wallets to kick in some dough for a cause that is surely very dear to us all.

This blogathon-with-a-goal is a long-held dream of the Siren's, but it is Marilyn who has been working like a demon to pull the logistics together, and she deserves all possible praise and thanks. Greg Ferrara of Cinema Styles constructed the beautiful logo you see above, showing an artist from a period badly in need of preservation money. As Marilyn says, "the NFPF gets its operating funds entirely through donations and grants, so whatever funds we raise through the blogathon will make a real difference."

Please start by clicking over to our Facebook Fan Page and becoming a fan. Marilyn, Greg and I will be updating it in coming weeks with suggestions for post topics, discussions about the blogathon, facts and figures on preservation and other matters. We welcome suggestions there, too. And go to the For the Love of Film blog, where Greg has posted ads and commercials you can use on your own blog and Facebook page to promote participation and awareness.
Posted by The Siren at 12:38 PM

Labels: Blogathons, For the Love of Film, Shadows of Russia, TCM

Self-Styled Siren said,"The Siren's blog is approaching its fifth anniversary, and to borrow a line from the best, "things are looking up."

Congratulations! on your upcoming fifth anniversary.

Thanks, for sharing the links to the NFPF and I most definitely, will try to bring attention to this cause the (NFPF) in the upcoming days on my blog.

Siren, I expect great things from this blogathon. I'm very excited about it and would like to put together at least one more commercial, possibly two, using more images sent to me by the Film Preservation Foundation, and of course more of my music to set the mood. I was honored to be asked by you and Marilyn to help out and expect one hell of a turnout.

On the importance of films of all types:

"It's like the public library, its full of books from the beginning of printing, and it doesn't make any difference whether they're old or new. Some are good, some are bad... Every picture is worth something to somebody, and there's always a reason for saving it, for not discarding it..."

Regarding who judges what has "lasting" value or not:

"That is what this prejudice and these silly judgments out of left field ruins; that is why they ruin archives, and ruin the curators work, and ruin it for the viewer, for you or me who just go to look at films; that's why these people aren't necessarily instructive. They should grab everything they can get hold of, for sooner or later it's going to be precious."

Louise Brooks to John Kobal, towards the end of her life - she knew, she knew, that time's a wastin'.

Siren, you got a shout-out from Robert Osborn on TCM tonight!!! It was awesome! I'm so excited for the Shadows of Russia series -- thank you for initiating it. :)

Also, congrats on your 5-year anniversary -- your blog is one of the best.

Count me in for the blogathon and a donation. I have no idea what I'll write about, but I've got a month to think of something! ;)

I will be aboard for the blogathon. A great cause and two great film blogs to put it all together.

Congratulations on your anniversary, and on this wonderful project. Count me in, too.

Congratulations on your anniversary, Ms. Siren.

I am beyond excited about this. I am an aspiring restorer of films, so this is my chance to do my part before my work begins. Can't wait!

Congratulations on your anniversary! I look forward to the blogathon, it's such a great idea.

Happy Anniversary Siren, may there be many years ahead!

Also, thank you for the heads up for the blogathon, a worthy cause! I plan on donating (for a shot at free DVDs) and also donating something blogworthy at my little corner of the blogosphere.

Congratulations on the anniversary - which made me realize that I posted my first entry five years ago tomorrow! - and count me in for the blogathon. I'm trying to think of something suitable: it may be about film preservation outside the US, but that's still in the appropriate spirit I assume.

Boston ain't that far away, but it seems like Yakutsk when you can't get down to BAM to take in Kenny, Siren, Lumenick and Uncle Joe.

I know all about the demise of nitrate in forgotten vaults etc.
My father was William E. Ault who saved so much footage during his years working for that thief Kemp Niver who never did anything but take credit. Bill later worked for UCLA vis a vis the library of congress. Univ. of Ohio at Columbus still has one of his machines he constructed from 2 old Eclair cameras.
I ended working for Binnie Barnes in her later years running her husband M.J.Frankovich's office.
Much kudos to all involved and if you'd like to get in touch with me here you go "mault53@google.com"
I cannot stand today's world and what I know is due to choice.
Congrats to all involved!
On a different note, he passed away 10 years ago this March 19 due to complication from nitrate - chemicals,fibers, etc. I"m sure he's watching with a smile on his face.

Ms Ault, thank you very much for stopping by to comment. It is great to hear from someone with first-hand preservation knowledge. Thanks so much for the support!

Here is more and thank you for your comments and concern.

Hi, Bucky it's me, Mary Ault.
I'd like to add some information about the 2 Eclair cameras that were converted into the ones that Niver "claimed" to have invented. He didn't invent any of it except for the name "Renovare Productions" It was the Englishman who he fired after the inital work was done in the mid 1950's.
And as for my father William E. Ault, he started working for Niver back in the 'early 50's after the original format had been sketched out by that Australian guy whose name I cannot conjour up right now.
The 2 machines - one of which is still at the Univ. of Ohio were cannabilized from several different Eclair cameras ending up in the 2 remaining.
BTW, Niver was married to Margaret Harrick, who came up with the name of "Primrose Production". She was the one who helped him establish his company. He'd also been one of the "Hat Squad" back in the of Los Angeles and it's infamous police force.
The original wizard of oz less charm.
Let's not even mention what happened with the Pickford fire at the United Bank in Beverly Hills that was used as a restoration site in the '60's due to everyone's penury. She lost all or most of her early work then. And the same with the Harold Lloyd collection fire in his basement.

My reason for writing this is to give credit to the actual living human being who did the Library of Congress work for Niver. He was never given anymore than a passing reference for that which ultimately ended his life - nitrate and the chemical issues with that material. It'll be ten years this March 19 that he passed away - it'd be nice to see a black boxed memorial to William and his work.
Thanks again for reading and I can be reached at mault53@google.com