Mission to Moscow Screening at BAM; Panel Discussion to Follow 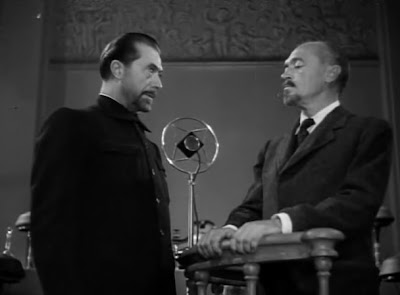 The Siren is taking one last opportunity to promote her live, in-person, one-night-only appearance at the Brooklyn Academy of Music, as part of the panel discussing Mission to Moscow, and oh my goodness, is there a lot to discuss. Ed Hulse will be there. Glenn Kenny is already doing his homework. Lou Lumenick is ready, and how. And the Siren is also studying up. Do join us for a screening and get ready to talk about this, one of the most notorious films of the entire studio era: Jan. 12th at 7 p.m., at the BAM Rose Cinemas, 30 Lafayette Avenue, Brooklyn.

To paraphrase Virginia O'Hanlon's letter, Papa says, "if you see it in the Times, it's so." And if Dave Kehr himself says it, it's really really so. So the Siren points to the last sentence of this write-up and announces that she has added "critic" to her "blogger" status, or if you prefer from the Sunday edition, "film writer"--like a frequent-flyer upgrade, except that she suspects there won't be that much more leg room. The Siren isn't sure what to do now to indicate the changed status, however. Repaint the foyer?

Anyone wanting to know why the Siren and Robert Avrech get along swimmingly need look no farther than these posts (part 1 and part 2) on Big Hollywood about the top ten movies he screened in 2009. The latest date is 1950, and the film is Madeleine, a neglected classic and favorite of the Siren's. Most of the choices are pre-1934. Plus he digs Constance Bennett in a big way, too.

The proprietor of the great Lombard fansite Carole & Co. occasionally comments here, to the Siren's delight, and last week he went a bit off-topic at his own place to offer a preview post for Shadows of Russia. Check the splendid photos of the St. Petersburg rail station.

The Siren watched Rasputin and the Empress and The Scarlet Empress live on Wednesday and is watching Reds and Red Danube off the DVR. So far she must say that the battle of the Empresses was won by Catherine in a walk, despite Dietrich's signal inability to play innocence. Don't get me wrong, I love Marlene, but that was one woman who emerged from the womb knowing the facts of life. But the stunning look of the movie had it all over Rasputin, despite Lionel's working his beard for all it was worth. The Scarlet Empress is one of the most beautiful black-and-white movies ever made, and also one of the most erotic.

As for Rasputin, it's a crash-course in scene stealing, with that art reaching its apex in the scene where John Barrymore first threatens Lionel. It's The Beard vs the Sword, as John refuses to look directly at Lionel, causing the monk to almost bulge his eyes out of the socket in an attempt to force eye contact. There's also the frightening scene where Rasputin forces little Alexi to watch a battle between a fly and an ant--hard to watch at times, between the terrorizing of a child and the grossness of seeing insects so close.

This week, it's the comedies, and the funny thing is that, as I note here in an article for Moving Image Source, the comedies have the most trenchantly anti-Stalin moments in the series.

Back soon with more thoughts.
Posted by The Siren at 11:51 AM

Lionel vs. John is indeed hilarious. And as ludicrous as it is Rasputin and the Emperess is tons better than Schafffner's elephantine Nicholas and Alexandra (despite the presence of my darling Richard Warwick as Rasputin's assassin.)

Just want to congratulate you.Though I have not posted before I always check out your blog. Wish I could be there at BAM. Below is a post I did last week.

I'm so sorry that I'm half a continent away! The one time I saw Mission to Moscow was in Brooklyn (at the Brooklyn Museum of Art).

Congrats, again, on your Shadows of Russia series and this event!

Because I’m also a continent away I just got Mission to Moscow down off the shelf to re-re-re-view it. Well...!
I’m here to tell you it hasn’t lost one iota of its impact – what a hoot! Talk about your Reductio ad Americanum - what a monumentally triumphant catastrophe of a movie! I loved every frame of it.

Forget the ant and the fly; for me, the money shot in "Rasputin" is when John leaps onto Lionel and then tries to beat him to death with a fireplace poker. The look of gleeful bloodlust on John's face is worth the price of admission. Wonder if there were any years of sibling rivalry that went into that little encounter?

I'd disagree with you, Siren, regarding Marlene Dietrich's inability to "play innocent". I think her performance in the first section of The Scarlet Empress is remarkable in capturing the childlike naivete of that character, this spoilt entitled Bavarian princess. The childlike innocent is a perfect fit for transformation into a devilish wanton.

Her expressions and reactions in the phenomenal wedding sequence is especially striking. SHe has been used and is being made use of as an ornament.

Marlene is even more convicingly innocent in Der blaue engel which is misunderstood as a story of a femme fatale corrupting a honorable man rather than a bleak despairing story of masculine pride and repression. Her character is compromised but she isn't malicious at all and retains a childish charm that puts her above her lecherous audience, the charm is in fact what enchants Jannings in the first place.

Marlene as a child in The Scarlet Emperess is played by her own child Maria Riva. If we are to believe Maria Riva's bio of her Mom (and I for one believe every dipped-in-venom word) she recalled every last nanosecond of the shooting.

Maria's also a big fan of Siren Fave Brian Aherne. Of all Mom's boyfriends she liked him the best.
Maria has much to be proud of in her own son, set designer J. Michael Riva among whose achievements is the overwhelming The Adventures of Buckaroo Banzai

Thanks so much for the link, the kind words, and your friendship. I've been watching Shadows of Russia and will be writing about the films for Big Hollywood. You and Lou have created a remarkable series that I, for one, find fascinating and in many cases, jaw-dropping.

Regarding The Scarlet Empress. This was not von Sternberg's first first operatic treatment of Russia. The Last Command, (1928) a silent film with Evelyn Brent, William Powell and Emil Jannings is an absolute masterpiece that also places love and passion at the center of the holy Russian soil.

Best of luck at BAM. Wish I could be there.

Jean-Marie Maurice Scherer, better known as Eric Rohmer is no longwe with us...

Everyone go out and get a copy of Triple Agent -- one of his last and very best works.

Arthur, heaven knows I respect your opinion and share your von Sternberg love, but I just don't see what you're seeing with Marlene's performance. In the first half, I see a fantastically beautiful woman widening her eyes and panting a lot. I don't get much of anything **underneath** until she starts living it up past the halfway mark of the movie. Dietrich doesn't even play the natural curiosity of the naive. Honestly, it doesn't matter that much because there is so much else going on in that movie, and the idea of masks and deception is so prominent that Marlene's lack of believability somehow doesn't hurt things for me.

David, I agree that Rasputin is a lot more fun than the later N&A movie.

Sad news about Rohmer. I wonder if some sort of health decline was behind his retirement announcement last year (if I recall)?

I suspect we were all half-embarrassed (I know I was) to chuckle at Gene Hackman’s line in Night Moves, "I saw a Rohmer film once. It was kind of like watching paint dry."

Sometimes true, one must admit, but that paint was a rainbow of pastel shades no one else could even approximate.

The ending of Le Rayon Vert comes closest to emulating the, for me, greatest ending in cinema history (Wild Strawberries), and that alone would earn Rohmer his seat in the Pantheon.

"Autumn Story" was the last Rohmer I saw and it was revelatory. I thought, if middle-aged French people still act like high schoolers when they try to engage romantically then this terminal confusion is par for the course. I also especially like the fact that there is little or no music on the soundtrack until the end when the band at the wedding starts to play.

He was a director who thought and provided an opportunity for his audience to think and feel along with him.

Best wishes tonight, working in the same building that has housed performers dating back to the days of Caruso. Wish I could be there, but 1) I'm working this evening, and 2) even if I wasn't, I live in Virginia.

Looking forward to tomorrow night's part of the "Shadows" series. "Comrade X" isn't a great film by any means, but Gable has his usual flair and Hedy Lamarr holds her own. If you resist trying to compare it to "Ninotchka" (which follows), you'll enjoy it.

Incidentally, I do plan to participate in your blogathon, as film preservation is important to me. In fact, today I noted your entry about it -- as well as the one celebrating Luise Rainer's living centennial -- at http://community.livejournal.com/carole_and_co/271639.html