For the Love of Film: Wrap Party 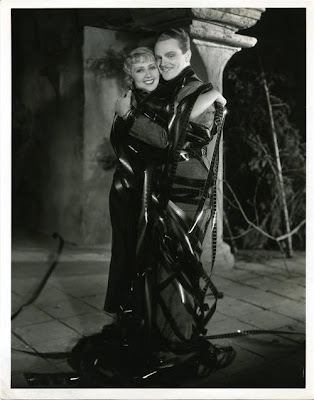 After more than one hundred posts from more than 60 bloggers, critics, archivists, students, food writers, film collectors and just plain cinephiles, the blogathon is over, and the Siren is at something of a loss for words. It has, simply, been one hell of a great week. The response to this, the film blogosphere's first effort to come together and raise money for the art form we love, has been tremendous.

When I first zinged the idea past Marilyn Ferdinand, I told her I thought it would be a nice way to raise a few hundred for a preservation organization. Pay the electrical bill at the restoration labs for a while, that sort of thing. Later, when we started to realize that the level of enthusiasm was higher than anticipated, Marilyn and I dreamed that we might hit $10,000.

And so it came to pass. We've raised $10,000 and change for the National Film Preservation Foundation. That should be enough to save an entire three-reeler--a film that will go on living because people took the time to write and donate. The NFPF is working on a special project, and our donations will be applied to it; details should be announced in June. When the film is restored, they want to make note of the fact that it was done with money from this, our film preservation blogathon.

In future, if anyone tries to tell you bloggers are all talk, point 'em to the Movie Preservation Blog, which will house a master list of all the posts and participants. And then tell them about the film we saved.

As Marilyn writes at her place,

The blogathon ads Greg made were plastered all over the blogosphere, and we got shout-outs from James Wolcott at Vanity Fair, The Auteurs, Lou Lumenick at The New York Post, and Roger Ebert, among many others. We had film students, film bloggers of every stripe, preservationists like Eddie Muller, and scholars like David Bordwell write about preservation. Tinky Weisblat, a food blogger with an interest in film, showed up and turned in a great couple of posts. We had Dennis Nyback, who actually projected nitrate film, tell us about it. And we had people who were willing to open their wallets in these tough times to help.

Even now, we still have donations trickling in, and more posts have come as well. Dennis Nyback is blogging about his experiences trucking nitrate film cross-country, a sort of film collector's Wages of Fear. Kenji Fujishima just made the midnight cutoff with a lovely post about preservation and The Crowd, at My Life at 24 Frames Per Second. Brian Darr of the fantastic blog Hell on Frisco Bay gave us an eloquent shout-out. And Michael Guillen's post about the immortal Lola Montes is a bit late, but so well worth the wait.

Finally, in keeping with the fact that we've had contributions from bloggers all over the world--India, Scotland, Dubai, Spain, the Philippines--the Middle Eastern Film Festival and its publications doyenne, Cindi Rowell, have chipped in with an interview with Serge Bromberg, co-founder of Lobster Films and co-director of L’enfer d’Henri-Georges Clouzot. They remind everyone that it is never too late to donate--how very true--and plan to include a regular preservation feature at their site.

And now the Siren is going to go find one of those cute little ice-packs that Myrna Loy wore in The Thin Man, and recuperate for just a wee while.

Great Closing post, give yourself a nice big Pat on the back also- Ya Done Good!

After this massive undertaking, you and Marilyn deserve an Eric Blore-ish butler to wait on you for a few days. Excellent work.

Farran: What a nice conclusion. I read the Wrap Party posts and translated Jaime's. I'm excited about the money that we all raised. You and Marilyn and everyone did a wonderful job. Thank you for giving us the opportunity. Now I hope you'll get some well-deserved rest. A visit from "My Man Godfrey" would be nice.

It is so wonderful to have further evidence of the power of blogging! What an amazing group of people. I'm so proud of everyone--you and Marilyn especially. Marvelous work!

It was almost a horse-killing ride, but a helluva journey! Thanks for the use of the hall, Siren - you have had a great start to this year in film, and thanks again for ramrodding with Marilyn!

Fantastic news! Should do this every year. Well done!

Brava, Siren, to you and Marilyn. I'm with D Cairns, this should be an annual event.

You did a great job! Congrats.

Thanks to you and Marilyn for everything you did and to all the bloggers out there. I agree with the others- this should be an annual event. If so, count me in- I'll be there with bells on, ready to help. Even if bells will no longer be fashionable next year.

Congratulations on a job well done. So many interesting articles, so much good reading.

By the way, I look at Cagney and Blondell in your masthead photo and think, 'My God, they're wrapped in nitrate. If someone on set had been careless with a match..."

Dan, I know, after this week I thought the exact same thing! And you know there was a LOT of smoking back then. Fortunately I am pretty sure Cagney didn't smoke.

Wow! A huge THANK YOU to Siren and Ferdy and everyone. I loved reading as many blogs as I could. The donation total is fantastic and very encouraging. I'm definitely up to doing this again next year. Finally, I have finished up the screencaps for The Shamrock Handicap, in case anyone wants to see some 1920s horseracing (and Janet Gaynor). :) A few pics didn't come out right but I should have them replaced tonight. The Film Preservation info and my journal entries (including one new/last one today) will stay up for a few more days, but otherwise it's back to lurker status. But I plan to keep on screencapping. I'm thinking about doing City Girl next, which will take much time and tender loving care -- but I hope I can get it up before the TCM Film Festival. Yes, I'm going! Hope I see some of you there. :) Thank you again to all.

Siren, Marilyn, what a fabulous week. I'm still catching up on reading all the posts. It's a thrill to read how much chicken feed was raised and that it is enough to save a 3 reeler. It' was fun to participate and, now that the pressure is off, my head is filled with more ideas to post about. Dammit, a little too late. I'll save them for next time! Congrats, enjoy your ice pack and get some sleep.

I love that pic of Blondell and Cagney, great friends, just like all the blogathoners! Thanks, everyone.

Rudyfan (sort of) beat me to it but:

TRY AND GET SOME SLEEP

At last I've said it.

I'm very impressed by the participation of both the bloggers and the financial contributors. I'll echo sentiments to make this an annual activity if possible.

Thanks for you very kind words about my blog in this wrap party post. My participation here was very much a lst-minute thing and I'm honored that my piece has been appreciated nonetheless. How do I go about submitting the link to the Movie Preservation Blog for "posterity"?

Brian, as far as I know, Greg is just picking up the links off my blog. I will make sure he sees the last batch.

I just realized I've been remiss in thanking Greg for his hard work, as well! Thanks, and good on ya, Greg!

I hope you and Marilyn DO have a little wrap party--after you recuperate! Thanks for inviting us all to the party, and CONGRATULATIONS.

Thanks for everything! This was a great endeavor filled with fantastic posts and, yep, love for film. All around an amazing experience.