Why We Fight: For the Love of Film, Part One

Along with Marilyn Ferdinand of Ferdy on Films, Greg Ferrara of Cinema Styles, and more than fifty other bloggers from around the world, the Siren urges anyone reading us this week to give something for our film heritage.

Please also check with your employer; some corporations match funds donated to the NFPF. If you know of such companies, please post them in comments.

To start things off, the Siren offers part one of a primer on Why We Fight (which film series, by the way, is on the list of films preserved by NFPF). 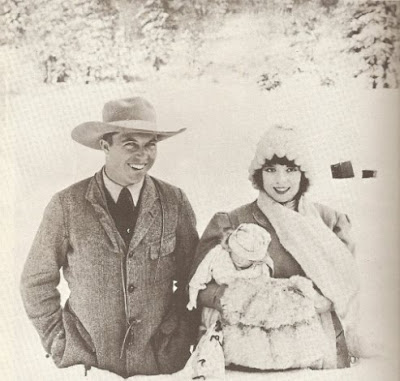 From A Cast of Killers, Sidney D. Kirkpatrick's book about King Vidor's quest to film, and solve, the William Desmond Taylor murder. It's 1967 and Vidor is visiting the Paramount lot:

In front of the white post-production building, teeming with activity from the Christmas releases, he saw an old friend, an attractive blonde, who worked in the film library. He complimented her miniskirt, then asked if he could take a look at some of William Desmond Taylor's films. He was particularly interested in Taylor's last production, The Top of New York. She went to the office to see what she could do.

Over the years Vidor and [Colleen] Moore had seen many of their own films destroyed. In the early sixties, silent films were thought to have no commercial value. They were difficult to store, dangerous to handle, and a fire hazard. Vidor's had been destroyed in a Bekins Storage Company fire, and Colleen's entire collection had burned up in a fire at Warner Brothers.

Vidor's friend brought him the news of Taylor's films. What titles had not disintegrated by the fifties were in such bad condition that they were taken out of the vaults, cut into small pieces with a chain saw, then burned, to salvage the silver content of the film stock.

The picture above is from the set of The Sky Pilot, the film Moore and Vidor made together; according to the Silent Era website, a print survives. Of Flaming Youth, the movie that made Moore's name and gave the world the flapper, only one reel survives in the archives of the Library of Congress. 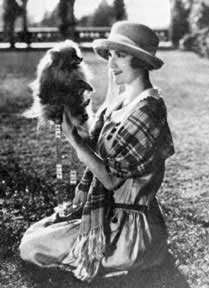 From Anita Loos's screenplay for A Virtuous Vamp, starring Constance Talmadge; included as an appendix to The Talmadge Girls. The movie opens just after the San Francisco earthquake of 1906. Gwen (Constance Talmadge), whose sole salvageable possession was a mirror, has just found her mother wandering near their former home, carrying a bicycle wheel and a garbage can.

The mother finally comes to and realizes what she has been carrying all the while, looks at the bicycle wheel and the garbage can and then at Gwen and says:

SP. HAVE I BEEN CARRYING THESE THINGS ALL THE WAY FROM THE HOUSE?

SP. DO YOU REALIZE, CHILD, THAT ALL WE HAVE IN THE WORLD IS A BICYCLE WHEEL AND A GARBAGE CAN?

Gwen then holds out her mirror and says, "But we have a mirror," and then looks at [her brother] Eddie who enters with his contribution, saying, "Look what I got." The mother takes it and looks at it:

SP. YOUR FATHER'S FAMILY CREST! THAT WILL HELP A LOT.

She takes the crest, lifts the garbage can lid, and drops it in. The kid, resenting this, goes around and fishes it out. The mother turns to Gwen and says:

SP. WHY COULDN'T ONE OF US HAVE SAVED A CAN OF SOUP?

The Silent Era website lists the survival status of A Virtuous Vamp as "unknown." 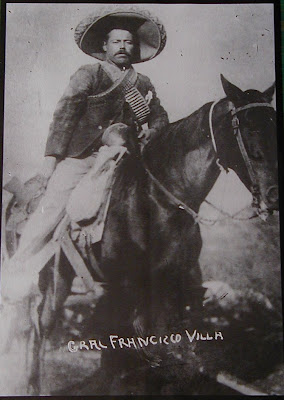 From Peter Bogdanovich's interview with Raoul Walsh, in Who the Devil Made It?:

Raoul Walsh: (discussing The Life of General Villa) I spent four or five months with Villa, photographing some of the battles..Then I'd photograph all the executions. In the morning they'd line up these Federales against the wall and shoot them. I remember the first morning we set up to photograph this and I looked around: there was a bunch of Mexicans there, some with rocks in their hands and another bunch there with knives. I said, "Jesus, this doesn't look too good." The cameraman was Dutch (I can't think of his name); I said, "You'd better be able to run, Schultz--I don't like the look of things." So this guy sat there, looked at us and said, "We are ready now." They shot these guys, and the bastards with the rocks ran in, opened the guys' mouths and knocked the gold teeth out. And the others with the knives went in and started to cut their pants and take their boots off.

Bogdanovich: Did you photograph all that?

Walsh: Yes. When I got home, [D.W.] Griffith said, "My God, Raoul, you've scared us all out of the projection room." I said, "Well, you wanted the life of Villa--you got it."

No print of The Life of General Villa is known to have survived. 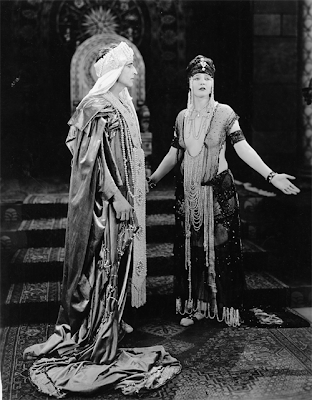 From Betty Blythe's interview with Kevin Brownlow in The Parade's Gone By:

[Director J. Gordon] Edwards returned to this country, and his whole flash of genius as a director just went to ashes...Now I just carry in my heart the memory of this beautiful thing--The Queen of Sheba.

The Queen of Sheba is a lost film. 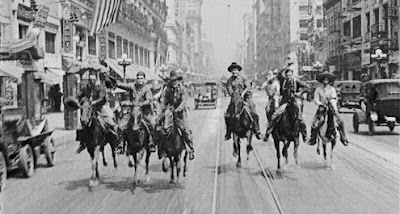 It was quite novel at the time--instead of riding to the rescue through Western scenery--they rode down Broadway at full tilt, weaving in and out. We went to downtown Los Angeles and rode the cowboys down the streets with a camera car ahead of them. And not a horse slipped.

Bucking Broadway was presumed lost until 2002, when it was located in the archives of the French National Center for Cinematography. The film was restored by Archives Françaises du Film in cooperation with the Museum of Modern Art. 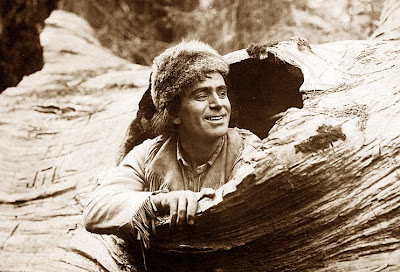 When construction was started on a skating rink on the site of a long-filled-in swimming pool in Dawson, the historic old gold-rush town in the Yukon, workers struck another kind of lode-a whopping 550 reels of film preserved half a century beneath the permafrost.

It seems that Dawson had been the end of the line on the old movie circuits-and the local bank, which had been storing the film in its basement, early on ran out of space for so many cans. Among other treasures, the trove yielded Douglas Fairbanks' long-lost The Half Breed (1916).

More recently, a couple remodeling their porch found two reels of film buried under it that turned out to be the Civil War drama An Angel in Contention (1914) with Lillian Gish. But in the couple of months that it took for the American Film Institute to get hold of it, the nitrate had disintegrated so rapidly that now only seven frames exist.

After publication of this article, it turned out that only two reels of The Half Breed, which was directed by Alan Dwan, had survived.
Posted by The Siren at 8:03 AM

Labels: Blogathons, For the Love of Film, John Ford

I had the fortune to see Bucking Broadway at the San Francisco Silent Film Festival. While it is frustrating to know that some films might never be seen again, it is also encouraging when a film, or even a part of a film declared lost is found, preserved and made available to be seen again as we move deeper into the new century.

Peter, that is exactly why I included it in this post because, as I told Marilyn, otherwise it was just depressing as all hell. If they can find a lost Dreyer in the broom closet of a mental hospital then you never what crazy stuff is still out there.

David, thank you! my automated roster post hasn't posted and so I must go check why.

David, it's fabuloso! can you do me one favor, and add the donation link somewhere in there?

My post is up, and naturally for me, it deals with film preervation and Carole Lombard:

It's mind-boggling to realize that something like 91% of films made in the silent era are irretrievably lost.

David, over at Lou Lumenick's blog he's got a post up reminding us that many of them were deliberately destroyed, too. They were considered to have no value.

Oh my God, there are tears in my eyes after reading this.

Thank you, Siren. This is a great start to the blogathon. I remember in The Parade's Gone By when Kevin Brownlow tried to meet Douglas MacClean. MacClean's movies were gone. His mind was gone. Really depressing. It's a wonderful thing every time another old movie gets unearthed.

Loved your Blog Post, great choices with regards to material you discussed. I am so glad you mentioned the Dawson material also. I was fortunate enough to become Friends with the Late Bill O'Farrell of the National Archives of Canada, who along with many other worked out the preservation efforts for this material. Their efforts at the time to restore these image were nothing short of Heroic.

Bucking Broadway will be included as an extra on Criterion's upcoming DVD/Blu-ray of Stagecoach. David Cairns has written the essay in the booklet accompanying the DVD.

Lovely mixture of research, photos, and information. I'm only now catching up with the blogathon posts, but I'm really enjoying them so far!