Why We Fight: For the Love of Film, Part Two 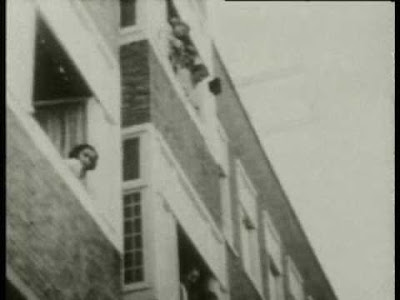 It was posted on the Net last fall, and has been watched by millions since: 20 seconds of film that offer a fleeting image of Anne Frank. It was July 22, 1941, and a young couple next door had just been married. There is a glimpse of Anne at the window above, happily watching the newlyweds, resting her elbows on the sill and calling to someone, we'll never know to whom. The view of her face is gone in an instant.

It is one of the most intensely moving pieces of film I have ever seen.

Now clearly that is because neither I nor anyone else who views Anne at the window can do so without terrible hindsight. History crushes those watching such films with Cassandra's fate of knowing what will happen, yet being forever unable to stop it. That is why few moments in the fictional movies can match the eerie jolt of one brief view of the real Titanic in Belfast, men walking up and down inspecting her magnificence.

Many newsreels and home movies capture quite ordinary moments, ones that history never reached out to give larger significance. And yet even a film of a homecoming parade fascinates, the spectators and beautiful young women speaking of happiness that can be created no matter what events roil beyond.

Home movies and newsreels, however, are some of the most endangered of all films.

Newsreels were a particular passion of the great Lillian Gish. The one movie she directed, Remodeling Her Husband, was lost, but when she testified before Congress in 1979 about the urgency of film preservation, Gish talked about newsreels and the need to protect the "living record" of American history. As Anthony Slide says in Nitrate Won't Wait: A History of Film Preservation, hers "was not an idle gesture, for while the features and shorts produced by the American film industry have been sought after and preserved, America's newsreels had generally been allowed to disappear through neglect and lack of funding."

The NFPF has made a special effort over the years to support cultural institutions as they work to preserve these bits of our country's "powerful history," as Gish called it. When you give through the blogathon, so are you.
Posted by The Siren at 8:05 AM

Such a nice new banner image of London After MIdnight Several years back a partial reconstruction of that Tod Browning flick was made using stills. It's at the Academy. I'm not sure if they distribute it in any form.

Excellent post. I agree those clips you've mentioned are almost overpowering, simply because we know what happened next. Lillian Gish, beyond her career, should always be remembered with gratitude as an early supporter of film preservation.

David, it's really too big, but I loved it so that I used it anyway. I watched the reconstruction but the images were so haunting and obviously of a high degree of art that it ultimately became quite depressing--like watching the party scene in Magnificent Ambersons and knowing it's 1/2 of what it could have been.

Jacqueline, thank you, and thanks for your contribution! I am adding it to the master list which I am about to bump.

I forgot to mention yesterday -- "Why We Fight" is a great title.

You make excellent points in your post. I found a newspaper article about people in 1907 San Francisco watching a movie shot on Market Street before the Fire and Earthquake of 1906: "But while hearty cheers greeted the familiar scenes as they followed one after the other, the pathos of the ravages of the great fire touched many hearts and there were tears in the eyes of scores of onlookers."
http://www.cable-car-guy.com/html/ccatdms.html

The London After Midnight restoration is available from TCM. It runs 47 minutes and is a heartbreak to watch, knowing how recently the last print existed.

HI- Part 2 of my Blog is up. It is a History of the Library of Congress Paper Print Collection.

Here is the link: