Anecdote of the Week: Merle and David Make a Death Scene 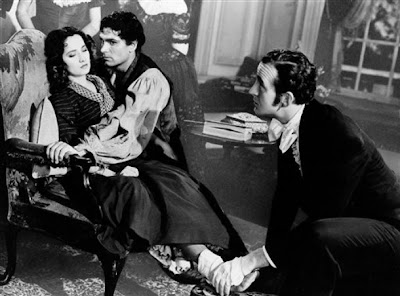 The Siren has been saving this one, from The Moon's a Balloon by David Niven, the funniest star autobiography she's ever read. Warning (and I am very serious here) read no further if you treasure the death scene in Wuthering Heights. You will never look at it the same way again.

So, if you're still here, it's 1939, and Niven, as Edgar Linton, is playing the death scene of Catherine Earnshaw, played by Merle Oberon. Flora Robson, Laurence Olivier and Geraldine Fitzgerald are on set for Cathy's final moments. Niven is supposed to break down in sobs. The problem: Niven can't cry. He tells director William Wyler, who by way of consolation bellows to the assembled cast and crew, "Here's an actor who says he can't act!" Niven attempts to give Wyler what he wants.

I tried and it was pretty grisly. Tam Williams got hiccups bottling his laughter and Larry looked up the chimney.

'Jesus,' said Wyler, 'can you make a crying face?'

I made some sort of squashed-up grimace.

Irving Sindler, the prop man, was instantly at his side.

'Give him the blower,' said Wyler.

Gregg Toland, the cameraman, gave his signals, and the film started passing through the sprockets.

Through a handkerchief, Sindler puffed menthol into my open eyes.

A terrible thing happened. Instead of tears coming out of my eyes, green slime came out of my nose.

'Ooh!! How HORRID!' shrieked the corpse, who shot out of bed and disappeared at high speed into her dressing room.

By the way, the Siren adores the still above. Maybe it's just her dirty mind, but it suggests all sorts of scenarios that would give Joe Breen apoplexy.
Posted by The Siren at 8:11 AM

''Wuthering Heights'' as zombie movie!!! Produced by such masters of refined elegance as William Wyler and Samuel Goldwyn.

''Wuthering Heights'' as zombie movie!!! Produced by such masters of refined elegance as William Wyler and Samuel Goldwyn.

There's a striking on-set story from another film which has the precise opposite problem. On the set of Rossellini's ''Rome Open City'', the priest played by Alberto Soldi needed to have tears on his face. Rossellini approached him with glycerine to substitute for tears but Sordi said he could cry for real. He did it but Rossellini was dissatisfied and they went through take and after take when on each occassion Sordi cried on cue. Rossellini felt that Sordi looked like an actor crying on cue and so unconvincing, finally he told him to use the glycerine and did the scene. Sordi never had a kind word to say about Rossellini again.

Then there's that famous analogue about Kazan directing Vivien Leigh in Streetcar and putting her through take after take just to se if she really could cry on cue each time. I don't know if it happened for real but it's suggestive.

I guess that for actors it's a technical thing; some can do it and some just can't. In All About Eve there is a scene where Celeste Holm breaks into laughter upon being told Margo doesn't want to play the part that has caused all the trouble with Eve. Holm broke into tinkling laughter exactly on cue. Davis, who did NOT like Holm (and it was very, very mutual) said angrily, "I don't know how you do that. I can't do that. Can you do it again?" and Holm did, right away, just like that. And yet Davis was unquestionably the better actor.

Where's Margaret O'Brien when you need her? I always like her control at six years old: "When I cry, do you want the tears to run all the way or shall I stop halfway down?"

I DO treasure the death scene, but I read the post anyway. And I'm glad I did.

I am now treasuring the mental image of Olivier looking up the chimney while Niven attempts to cry.

Niven was a raconteur par excellence, and one of the best talk show guests ever. I read The Moon is Blue dogs' years ago, and it's clearly time for a return dip.

Karen, I love the death scene as well but this is still pretty freaking funny.

Vanwall, did you ever read Vincente Minnelli's account of getting O'Brien to cry? It was a little more complicated than that...

Siren -
I've heard the dead dog story, and it's still up for grabs as far as veracity, he said/she said - O'Brien was accomplished enough to cry pretty damn good already, judging by her previous films, but I have no doubt that was used plenty of times, if not on her, on hapless others. At least she didn't spew green snot at will, but I kinda get the impression she coulda-woulda.

VW, yeah, I don't know but what that I trust Margaret more...

I treasure the death scene in Wuthering Heights. I recorded Olivier's dialog by holding a tape recorder next to my tv. I played it incessantly in my walkman as a teenager. This is probably my single favorite scene after, "I hate the look of your milk white face! I hate the touch of your soft, foolish hands!" And yet, this is a great anecdote, too good to be left alone.

Also, anyone who has dirty thoughts looking at stills from WH is my kind of freak show. Bravo, again, Siren. Bravo.

Jenny -- "my kind of freakshow" -- why thank you very much, that's a definite day-brightener. :D Bunuel would have adored that still too and probably did.

If not Bunuel, than certainly Lubitsch. Think of what Lubitsch would have done with Wuthering Heights. He would have made Heathcliff sane and Cathy likeable which would have made Edgar instantly less gay and more "elegant." They both could have moved in at the Grange. Edward Everett Horton would have to play Hindley...

When I was about five years old, my family went to Mexico for a vacation. One of the places we stayed was a spa in the mountains called San Jose Porua.

One day, I saw a man in a white suit and panama hat climbing out of the terraced orchards extending down the hillside. He walked up and gave me a fresh lime.

Years and years later, I read Bunuel's autobiography and he mentioned using San Jose Porua as a writing retreat during his Mexican years. The timing was right and I prefer to believe that the gentleman who handed me that lime was Luis Bunuel.

Gmoke, I totally would too! do the facial features fit?

Perhaps not coincidentally, given our current topic, I’ve had “The Moon’s a Balloon” on my night-table the last few days, re-dipping into favourite passages. 2nd place for Anecdote of the Week might be what preceded Niven’s mucus mishap: At first Niven refused to take on the role of Edgar, and only agreed after getting a face-to-face promise from Wyler that he “wouldn’t be a sonofabitch” like the last time (on Dodsworth).

Wyler looked Niven in the eye and swore it would be different, “I’ve changed… I’m not a sonofabitch anymore.”

Of course Wyler willfully and gleefully broke his word day one of WH.
Niven confronted Wyler and asked if he remembered his promise.
WW: “Yes, I remember, what about it?”
DN: “You really are a sonofabitch, aren’t you?”
WW: “Yes -- and I’m going to be one for fourteen weeks!”

I loved that one! Wyler was so mean he even made sweet Audrey Hepburn cry. But he got results...

I've often imagined an alternate universe production of Best Years of Our Lives in which foul-mouthed and tyrannical Cathy O'Donnell reduces timorous and tremulous William Wyler to a puddle of tears with her towering rages.

Not sure I’d be entirely comfortable living in that universe, X, but it sounds like a helluva place to spend a weekend.

I was five. It was only a moment. The man was thin with an angular face. Could be Bunuel. The lime could have been a lemon as well. Memory is a strange thing. One could say surreal....

She's kinda mean, in a pious sort of way, isn't she?

She's always reminded me of my grandmom, but after I read All About "All About Eve," it was moreso.

As to tears on cue, I've heard that about Joan Crawford, too, I think from Vincent What's-'Is-Name, that she asked which cheek the tear should roll down.

Hamletta, I just read All About All About Eve myself and I greatly prefer Bette Davis's particular brand of, um, personality to HOlm. And yes, Holm tells that story a LOT.

Siren, are you preparing for the great "All About Eve" blowout by TCM next week?

I envy all those who will see it on the big screen. Talk about larger than life!

Ladybug said...
This comment has been removed by the author.
3:08 PM

(Here I go again) I’ve always adored Celeste Holm; BD not so much. No question but there is more than a hint of razor wire in Ms Holm’s dazzling smile; that smile, those eyes, the tinkling laughter taken together are absolutely captivating, but they also warn ever-so-subtly: ‘Don’t fuck with me, I’ll tear you to ribbons…’
Ever the bridesmaid (Tender Trap; High Society et al.), she’s been overlooked and underestimated almost her entire career, but anyone who loves B’way Musicals is forever in her debt for Ado Annie.

(Forgive me, I can't resist)
This is my final word on Wuthering Heights:
presenting Heathcliff and Cathy in one of the milder scenes from Arashi ga oka, the 1988 Japanese version.

Celeste Holm shows her steel in "Champagne for Caesar."

It isn't that I dislike Holm on screen, she's often breathtakingly good. Along with John Garfield, she keeps Gentleman's Agreement from being a total snooze. But I never seek her out nor do I think "oh goody" when I see her name in the credits. I don't know, I find her hard to warm up to.

Ladybug said...
This comment has been removed by the author.
9:21 PM

These people made adultery look amazing, haha. Now if Vivien Leigh/Laurence Olivier were featured in a GQ issue, I'd buy out the newsstand.

I don't know if Holm ever gave a real reason for hating Bette. I saw a DVD extra for All About Eve in which she recalled their first meeting. She offered a pleasantry to Bette, who fired back, "Oh no, manners." And from thence on, Celeste despised her. Doesn't seem like a great rationale to me, but I guess they just didn't get on. From all I've read of Bette, she either loved you or hated you. She was prone to extremes. But she was more than capable of mining the grey areas on screen.