For the Love of Film: The Big Reveal 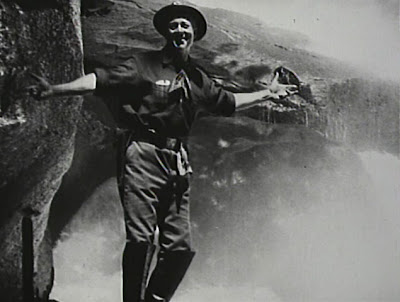 Update: Marilyn has additional behind-the-blogathon and NFPF information at her place, so do read up there too.

A little earlier this evening, the New York Times published news of 75 silent films, previously thought lost, that have been discovered in New Zealand and are being restored through the efforts of the National Film Preservation Foundation. Among them are Upstream, a backstage drama by John Ford--and aren't you dying to see what he did with that genre? There's an early Clara Bow feature, Maytime--and right now Operator_99, Donna Hill, Flapper Jane, Robert Avrech and David Cairns and my other silent-film peeps must be turning cartwheels. And there's also the earliest surviving film directed by and starring Mabel Normand--hoorah for women pioneers! hoorah for Mabel Normand, so much more than a footnote in an infamous murder.

This was all over Twitter and the blogs in record time.

Well, here's something they aren't saying.

At least two of the films being restored are ours. And that includes the very first one, called The Sergeant, a Western from 1910, shot on location in Yosemite Valley before the National Park Service even existed.

What do I mean by ours? We raised the money for them in February, $13,500, through the blogathon we did for the NFPF, For the Love of Film.

That means these films are surviving through the efforts of Marilyn Ferdinand, the powerhouse behind organizing the blogathon; the people from the NFPF who contributed clips, stills and information for the Facebook page and elsewhere; Greg Ferrara, who contributed the video and banners; me; the 80 or so dedicated bloggers and critics who wrote contributions; and, most of all, the 70 or so people who followed the links and donated. 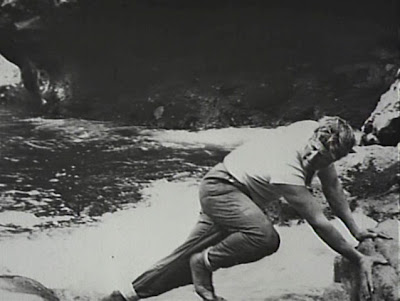 Believe it, folks. Here is an excerpt from the press release about The Sergeant, from Annette Melville of the NFPF.

The exciting discoveries include The Sergeant, one of the earliest surviving narratives shot on location in Yosemite Valley. The one-reeler shows the magnificent terrain prior to the creation of the National Park Service, when U.S. Army cavalry troops kept order, and it is the military presence that provides the backdrop for the story.

In this Western, the sergeant takes his commander’s daughter on a horseback ride along the Merced River. When their horses are stolen by a renegade, they are forced to travel back to headquarters by foot and lose the trail. In the first clip, mounted troops search for the lost couple. The two are found the next day and the sergeant is disgraced. However, the sergeant proves his mettle when he escapes during an Indian attack and leads reinforcements to the rescue. The second clip shows his daring exploit.

The Western was one of many made by the Selig Polyscope Company, the early motion picture company renowned for its “action” pictures. Based in Chicago, Selig sent director Francis Boggs west in 1908 to find authentic locations for Westerns. Shooting films across the Southwest, Boggs made his way to Los Angeles, where he set up the city’s first movie studio. Boggs found that the sunny climate was ideal for outdoor filming and that the area offered a wide array of scenery as well as access to sensational locales, such as Yosemite and Mount Shasta, both used by the company. To act in the films, Boggs hired Hobart Bosworth, one of the first trained Shakespearian actors to crossover to the then-less-respected art of film. Bosworth appears to play the sergeant in this one-reeler, which he probably also directed.

Very little survives from Selig Polyscope Company, aside from Col. Selig’s papers in the Margaret Herrick Library of the Academy of Motion Picture Arts and Sciences. After the murder of Boggs on the set in 1911, the company continued on with its popular Tom Mix Westerns, the early serial The Adventures of Kathlyn, and animal pictures (the Selig menagerie became part of the Los Angeles Zoo). However, the company failed to make the transition to features and ended production in 1918.

And here's the part that has the Siren turning cartwheels herself.

About the preservation. This remarkable film—part Western, part travelogue—survives through the single copy shared by the New Zealand Film Archive. The original nitrate distribution print was shrunken but complete. Thanks to funding contributed through “For the Love of Film” Film Preservation Blogathon held from February 14 to 21, 2010, the print was painstakingly copied to modern black-and-white safety negative film. This transfer was made from the negative at 16 frames per second and the tints added digitally to reproduce the colors on the original print.

For the exhibition print, color film will be cut in for the red- and amber-tinted intertitles so that the film can be enjoyed today as it was originally seen by audiences in 1910. The Academy of Motion Picture Arts and Sciences is supervising the preservation and will house the nitrate source material, preservation masters, and access copies so that they will remain available for years to come.

Here's the credit that will be attached to the film from here on out. The Sergeant will be included on Treasures V, part of the NFPF's DVD box-set series of films preserved through their efforts. 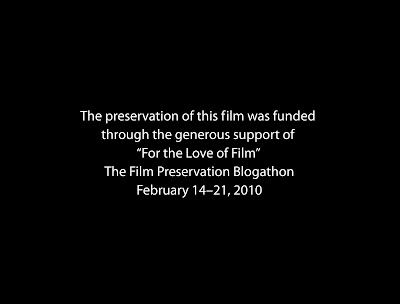 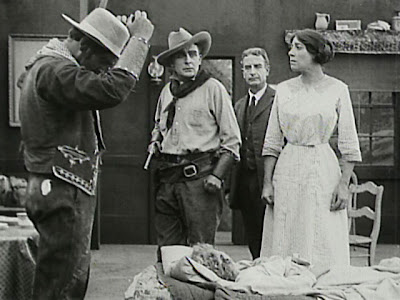 Because the blogathon donations qualified for matching funds from the federal government (hoorah for government funding! sorry, couldn't resist), we can take credit for about $27,000 of preservation money. That means our efforts will also help save another Western, The Better Man (Vitagraph Company of America, 1912) "a Western in which a Mexican-American outlaw proves himself the better man," according to Marilyn. The Siren doesn't know as much about this one, but will be sharing details as soon as they are available.

Update: Clips from The Sergeant are now up at the NFPF site, so go over and take a look. And here is a partial list of some of the most exciting discoveries from New Zealand.

And one note. Perhaps you didn't donate in February. The rent was due, the cat was sick, the kids had cavities, Nathan Detroit showed up at the door to remind you of a pressing debt of honor. It is not too late. The donation link still works. And the NFPF is still working to repatriate all those films, and there will always be others.

Meanwhile, the Siren's busting out the champagne.

(The first two stills are from The Sergeant; the third is from The Better Man.)
Posted by The Siren at 8:28 PM

Labels: For the Love of Film, John Ford

To say this is good news is to wildly understate things.

I still want to see "Hats Off."

Wow! This is so cool! A distinct, concrete result from the efforts of a bunch of bloggers! Thanks, Siren, Marilyn, and Greg! Thanks to all you who helped, in any manner! I've never seen any real results from donating to anything before, so this is exciting! Thanks for the heads-up!

This is really quite wonderful: as Vanwall says, I've almost never had a sense of such concrete value coming from a donation.

And what is going on with these NZ and Australian archives that turn up such treasures?!

What a lovely conclusion to the weekend!

Outstanding! Honored to have been a part of it.

I too am very honored to have been a part of this effort. It's humbling to know that blogging about what we all love, movies, can make such a difference. I also think it's pretty cool the two films are westerns! One of my favorite genres!

If I was in better shape, I'd do a cartwheel. Be that as it may, this is the most incredible film news that I've heard in quite some time. I'm positively thrilled to have been a part of it, and I say we do this sucker again soon!

So little of the silent cinema remains. This si cause for major celebration.

Thank you! I'll be up all night waiting for the complete list.

My verification word is "rejeoxe," which is pretty much what I'm doing.

I have finally participated for the betterment of world culture after spending so much of my life as a dreg of consumerist society.

Hopefully some of the 75 titles might be say, some missing footage of GREED(one can hope against hope).

The Selig Collection at AMPAS contains papers and contracts, bulletins (ads for exhibitors), and stills from virtually all of the films.

That "For the Love of Film" credit screen is simply heartwarming.

When I saw the article at the NYTimes site--the featured story of the online edition last night, by the way--I had no idea of the Sirenic connection.

This is so exciting. So cool.

Thanks to you guys for all your hard work. Wow.

Hooray! I thought of the blogathon when I read about these films, OF COURSE. Well done, Siren and Ferdy!

Dave Kehr in the NYT on the find.

Gareth and Vanwall make an excellent point; it really is wonderful to see a donation make an immediate, measurable impact. We did good. And it does my heart good to see people here in comments who blogged for the blogathon and threw something in the hat. Film preservation is in some ways a hard sell--b&w, silents, obscurities--but not for this crowd. Which is an awesome thing.

Fantastic! My usual feeling of being of artistic value feels less hollow than usual.

Well, KUDOS to Farran and Marilyn for a job well done. An awesome job and very nearly instant gratification. :-)

This is great news. Very proud today as a movie lover.

I have a quirky question for you, if the newly discovered John Ford silent film is screen in Los Angeles this year - does it make it eligible to receive an Oscar nomination.
Looking through the AMPAS rules and eligibilty, I can't locate any reference to a film requiring a specific time frame in which it was made for it to be eligible.

Rhett, wasn't the Ford released in 1927 though? I dunno, AMPAS rules are not my specialty, I'm afraid!

So fantastic. Thanks to all the Blogathoners, contributers, and New Zealand too!

YES I am very intrigued by John Ford's "backstage" picture!

Put me in the cartwheel camp, especially since the batch includes a chapter from a long-lost serial!

More breaking news, a lost Keystone Comedy 'A Thief Catcher' (1914) has been found, which includes 2 minute cameo by Charles Chaplin.

I am sooooo happy!

A Ford movie was saved. I don't care if it's not even a very good Ford movie... it's a Ford movie, and you guys saved it.

Coolness. I'm glad I was part of it.

Just read this and I'm passing along:

Tonight's (Thursday, June 10 at 9 p.m. EST) Modern Marvels program on the History Channel will be about the Library of Congress, with a significant portion on the Packard Campus for Audio Visual Conservation.

And for your further film-viewing pleasure . . .

Siren, it was a pleasure meeting you last June 12. As I said, the pics do not do justice.

It's just cool when it works. And it worked. The cartwheel didn't, but I'm having someone take me around in a cart with a wheel.