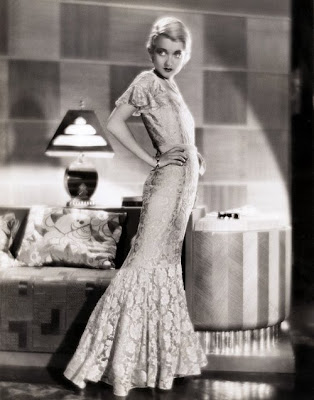 The Siren can't believe she never noticed this before, but two of her most treasured, obsessive obsessions share a birthday, October 22. One is Joan Fontaine; the other is Constance Bennett. Tomorrow, Turner Classic Movies will be playing Bennett's films all day, and the Siren has several set to record.

And the Siren says, loudly, that the one worth clearing out the whole DVR for is George Cukor's What Price Hollywood?, which the Siren rhapsodized about at great length in May. Go forth and record, at 8:45 am Eastern, because it ain't on DVD.

Before we get into the other goodies TCM is bestowing on us, here is a bit from Brian Kellow's The Bennetts: An Acting Family. It was 1965, Constance had terminal cancer and was being admitted to the hospital for the last time. And did Death's icy outstretched hand cow Constance? See for yourself.

By midsummer, Constance's condition seemed outwardly stable. One evening in mid-July, she suddenly collapsed, and [husband] John rushed her to the nearby Fort Dix Hospital…Constance was quite unresponsive as she was wheeled in to the admitting desk. John began helping the nurse on duty fill out the entrance forms, but when the nurse asked Constance's age, a clear, strong voice called out from behind them, "I was born in 1914"--cleanly shaving off ten years.

The Siren loves this dame.

Here's what on TCM. All times Eastern.

A comedy, which Constance excelled at; Kellow says she has "a special glow" in this one, and quotes one great line: "I talk so much to myself that I'm all worn out when I meet people." On the Siren's DVR it goes.

One of Constance's mother-love dramas, made the same year as What Price Hollywood? and good, via Cukor, who loved Constance and always spoke well of her: "Constance had one kind of romantic, Scott Fitzgerald look about her. It was the look of the 1930s--or perhaps the 1930s looked like her."

The Siren doesn't need to go on about this one again, does she?

Oh look, let's see what Constance does to Herbert Marshall, shall we? David Shipman says it's a version of The Green Hat. Recording.

Written up here. Most of the Siren's patient readers must be well familiar with this one, but it deserves its classic status.

Not as good without Grant, but still diverting.

All right, so it isn't My Man Godfrey, but it's an awful lot of fun just the same.

Looking forward to this one. The Siren has a copy of the novel, with a great movie tie-in cover, and it's Curtiz, after all.
Posted by The Siren at 8:00 AM

How well I reme,ber seeing Rockabye at Howard&Roger's back in the day. Howard&Roger (one word) were a couple of New York film fanatics who found 16mm prints of the most obscure des obscure and held screenings in their apartment.

All gone thanks to AIDS now.

Constance Bennett was for 30's audiences the very image of sophistication. For some reason Mr. Cukor didn't think she was "all that." But he worked well with her nonetheless.

So many rarities, too. Wonderful line-up. Recorder will be set. Thanks for the heads-up!

I've seen all but Lady with a Past, Rockabye, , and Outcast Lady, but I'll be DVRing What Price Hollywood? as well, just to have a copy around for when I get lonely.

I tweeted bout Constance Bennett day Tuesday morning, as soon as I saw it in my on-screen guide. SO EXCITING.

Even more exciting than Marion Hopkins day last week, which netted some new ones for me, including the rather tartly-written Wise Girl. I do love a sassy blonde!

Don't write off "Topper Takes A Trip." It may not have Cary Grant, but it does have Asta, as "ghost dog" Mr. Atlas...and Roy Seawright's special effects are always wonderful. Constance makes one sexy ghost.

The Unsuspected is GREAT.

David, I'm watching Rockabye on my desktop when I should be working. "Whaddaya mean 'fatha'? I'l kill ya, ya dirty rat!" Whatever got into Cukor? Constance rocked then as now.

As for What Price Hollywood?, there are simply no words...

Well I stopped trying to guess what got into Mr.Cukor quite a long time ago. He contains multitudes.

Jackie Bissett tells me she was a tad resistant to Mr. Cukor's insistence that Rich and Famous (which she co-produced, btw) be primarily a comedy. She saidn "I wanted somethign a little more like Autumn Sonata" However, she adds, as the years pile up she's come to the conclusion that he was right. We need more comedy to deal with the world and its vicicitudes.

Just in from The King's Speech which is total fluff but all the better for it. Colin Firth has charm streaming out of his eyeballs. Helena Bonham Carter has a ball palying the Queen Mum, and it's clear that Timothy Spall has longed to play Sir Winston Curchill sing he was six. Guy Pearce is perfectly cast as that bounder "The Duke of Windsor."

All together it's about as intellectually subtantail as When My Baby Smiles at Me.

And all the better for it.

My favorite Constance Bennett is the little-seen Merrily We Live. I have one of my faithful friends taping Outcast Lady. I can't wait to see what she does to Herbie.

I quite liked Lady with a Past. Bennett played sharp so often that it's fascinating to see her play helpless, and she does a great job with it.

I didn't LOVE Rockabye, but she was tremendous in it, I thought. The scene after Lilibet is taken away and Judy collapses, sobbing, on her mother's lap was quite astonishingly naturalistic for the time period.

Outcast Lady was The Green Hat with all the dirt removed (except for that rather tantalizing final shot of the tree with Gerald's and Boy's names carved together) and with precious little naturalism, either. But it was a fun ride. I do love a film where a woman with a bad reputation decides to make it worse!

All in all, I found Constance Bennett Day to be highly satisfactory.