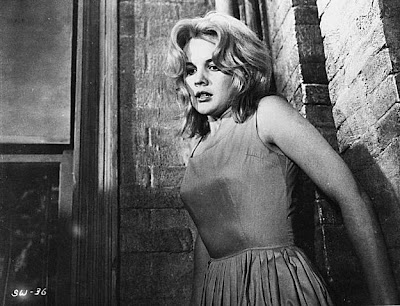 Update: Kim's piece on Something Wild is up at Sunset Gun. The Siren watched it and testifies that the movie is all she says, and then some. More than worth your time, a highly original piece of filmmaking. And Kim's chat with Robert Osborne showed her far-ranging classic-film chops, and the way she responds to a great film not just with her considerable intellect, but with deep emotion as well.
This month Turner Classic Movies is doing a great series called Critics' Choice. A number of film critics were asked to pick a double feature of favorite films. Two of the Siren's favorite critics--and dear friends--are appearing, and they both made splendid, offbeat choices.

Tonight (Oct. 13) goddess Kim Morgan will be discussing Something Wild, directed by Jack Garfein and starring Carroll Baker, at 11:30 pm Eastern time; and at 1:30 am Thursday morning Kim introduces the superb He Ran All the Way, directed by John Berry, with cinematography by genius James Wong Howe. As the Siren's patient readers already know, it's the last film of John Garfield, an actor Kim and the Siren both yell about from rooftops and barstools and passing convertibles and whatever else is handy. 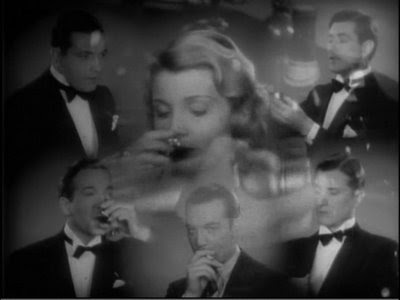 On Wednesday, Oct. 20 at 11 pm Eastern, Lou Lumenick, the Siren's fearless Shadows of Russia comrade, shows his great taste in classic film with the seldom-screened, exceptionally good The Last Flight, directed by William Dieterle, who deserves a much higher profile. And at 12:30 am Thursday morning Lou introduces All Through the Night, directed by Vincent Sherman, one of the Siren's favorite stalwart studio directors, and starring Humphrey Bogart and Peter Lorre.

Fire up the DVRs, y'all.

You can quite literally see John Garfield dying on screen in He Ran All The Way. The character he plays is dying -- and so was he.

John Berry is crying for rediscovery on a number of levels. Casbah is my favoirte version of Pepe Le Moko. Seriously. Even with Marta Toren. Hey, Harold Arlen wrote the score. What can beat Tony Martin cralwing over the roofs singing "For Ev'ry Man There's a Woman"? Not to mention his redition of what has become my favorite Arlen song "It Was Written in the Stars."

So he gets blacklisted, moves to France, comes back briefly to do Claudine -- the only realistic drama made during the Blackspliotation period> Then back to France ending his acting career as Delphine Seyrig's love interest in Chantal Ackerman's musical The Golden 80's. Finally he films Boesman and Lena which is released posthumously.

His son Denis appeared in Rivette's L'Amour Fou, has directed on his own and was married to Jean Seberg and later Anna Karina.

Denis must be some kind of attractive; that's a hell of a track record. I also like Claudine very much, but I haven't seen Casbah.

I love that both you and Kim are both champions for He Ran All the Way (a film I love) and John Garfield!

I’ll second David on a John Berry revival, especially for the wondrously lyrical From This Day Forward, a film that distills the poetry of working-class domestic life without condescension or sentimentality. Joan F. never more beguiling. He Ran All the Way is a troubled and troubling film, going in and out of dramatic focus, but John Garfield is towering, playing a “Garfield type,” at once breaking down and breaking through into something we would never see.

Vincent Sherman doesn’t even get a listing in D. Thomson’s dictionary in spite of The Hard Way, Mr. Skeff, and more. All Through the Night is a fantasy of Bogie playing Cagney and Fritz Lang doing screwball. And you can bet Hitchcock was taking notes. A delight.

XT, Sherman is yet another "what about HIM, huh?" entry in the Great Auteur Sweepstakes. The two Sherman films you name are great. I'm pretty sure I've seen All Through the Night (it is one of those very long-ago Superstation entries for me) but I'm sure it will be a big rediscovery.

Raquelle, I can't wait to see Kim on TV talking about this one!

Another good, though uneven, Sherman film is Saturday's Children, which coincidentally has Garfield and handles the subject of working-class marriage like FTDF before spiraling down into melodrama.

A curious thing about Something Wild: the music for this low-budget indie is by no less than Aaron Copland. Copland had done some high-profile films in the 1940s --Our Town, The Red Pony, The Heiress -- and he even won an Oscar for the last of these in 1949. After that, he opted out of Hollywood, but for this single exception.

I love love love love love The Last Flight. It's beautiful to watch, and the story it tells seems to capture the Lost Generation better than anything I've ever seen or read. Some might find it overly mannered or artificial, but they will have to say that to my face, and smile.

Copland refashioned the score into an orchestral work called Music for a Great City, a return to the urban world of Quiet City after thirty-years in the prairies.

My only John Berry tribute so far is here:

A flawed but fascinating film in bad need of restoration. As is Berry's reputation. In many ways his career parallel's Dassin's, but without the landmark of Rififi. Dassin even made his own blaxploiter, Up Tight! (a black remake of Ford's The Informer, if you can wrap your minds around that).

Berry seems fascinating on so many levels it's amazing that a critical study or retrospective hasn't tried to raise his profile.

Dieterle and Vincent Sherman deserve all the love we can spare too... especially The Last Flight.

I can never resist chiming in with words of praise for Dieterle (Last Flight certainly is among his best) and Sherman--good to hear these two have some friends in high(er) places!

Rosczaphile & XT - I had no idea. Now I am even more eager to see it, and hear if Kim talks about the music.

Karen, I agree wholeheartedly; The Last Flight gives you an amazing feel for these rootless, traumatized people, without a trace of overt sentiment or moralizing. And it is gorgeous, and Helen Chandler was so good I took back every mean thing I ever said about her in Dracula. David Manners too.

David C., Tamango looks intriguing as all hell. David E., Berry fan -- have you seen it?

Anagramsci- agree on both Dieterle and Sherman. Also want to plug Old Acquaintance and Harriet Craig for the latter.

Ladybug said...
This comment has been removed by the author.
3:00 PM

Ladybug said...
This comment has been removed by the author.
3:15 PM

Tamango is indeed a forgotten treasure and David C's review is great. Originally I bought it because of Jürgens and Dandridge, but quickly learned they are only a small part of the package. The subject matter, as David stated, is difficult and frank, particularly for 1958.

It is not impossible to find, but the quality of the copies certainly vary. A restored version would be wonderful.

Siren - for another gut-wrenching story about slavery, see Slave Ship (1937) starring Wallace Beery, Mickey Rooney and Warner Baxter. Yes, GS is in it with a monocle, but the most horrific scenes in this film deal with Beery getting rid of the slaves as the slave traders are about to be caught. And Mickey Rooney, who I mostly and unfairly associate with Andy Hardy, is quite a surprise.

I saw Tamango when it came out, and recall it as exotic and exciting -- with Dorothy Dandridge giving it everything she had. And that was quite a lot.