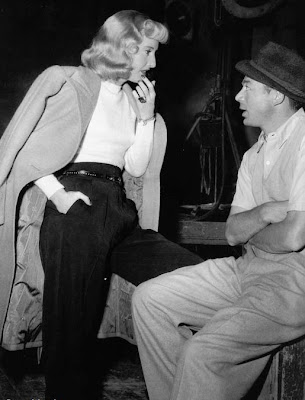 As a small treat, to celebrate the end of a job well done by all, here is the oft-told tale of how James M. Cain came to conceive of Double Indemnity--told exceptionally well by Otto Friedrich in City of Nets.

Double Indemnity…derived from an old newspaper story. Back at the dawn of time, back even before Arthur Krock first arrived in Washington to cover the administration of William Howard Taft for the Louisville Times, a terrible thing happened at the printing plant in Louisville. There was an ad in the paper for women's underwear, as Krock recounted the episode to a young writer on the New York World, and it was supposed to say, 'If these sizes are too big, take a tuck in them.' But as Krock was reading through that night's first edition, he saw that somebody had changed the first letter in the word 'tuck.'

Krock ordered the ad changed for the next edition, then summoned the printer and demanded an explanation. The printer couldn't provide one. He couldn't understand how such an embarrassing accident could have happened. Krock remained suspicious. Two days later, he went and interrogated the printer again, in the interrogatory manner that would daunt future presidents and secretaries of state when Krock became Washington bureau chief for the New York Times. The printer confessed. 'Mr. Krock,' he said, trying finally to explain, 'you do nothing your whole life but watch for something like that happening, so as to head it off, and then, Mr. Krock, you catch yourself waiting for chances to do it.'

The young writer to whom Krock told this story, James M. Cain, was fascinated by the idea of a young man yearning to commit the one crime he is responsible for preventing…Cain had once been an insurance salesman, and his father had been an insurance executive, so as Krock's story floated around in his mind over the course of many years, it acquired a characteristically Cainian form: insurance fraud.

Updated final links, including those who slipped in under the wire on Monday, for the For the Love of Film (Noir) blogathon are right here and right here. Please continue to enjoy.
Posted by The Siren at 11:50 AM

Labels: Anecdote of the Week, Billy Wilder, For the Love of Film

Aint it the truth! Behind every great writer is a story like that one!

Yes, it's quite true that many, if not most, writers are marinating an idea for many years before they find the form the story should take. I do love that printer.

That's great! Thanks. It helped put a dark day today in perspective for me.

That is a corker of a tale; I had never known about that! Thanks.

And thank you for adding the link when you didn't have to. It means a lot.

I don't know why you keep wanting to call me by another name (Mark David Hueck instead of Marc Edward Heuck), but I guess maybe I have a good alias to use at a grimy hotel in the future now. :D

That's a teriffic pic of Elizabeth Taylor and James Dean on your banner, Siren.